Johns Hopkins materials scientists have found a new use for a chemical compound that has traditionally been viewed as an electrical conductor, a substance 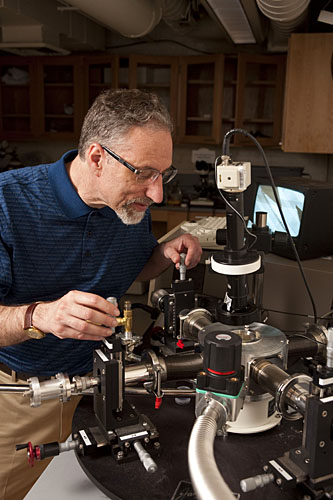 that allows electricity to flow through it. By orienting the compound in a different way, the researchers have turned it into a thin film insulator, which instead blocks the flow of electricity but can induce large electric currents elsewhere. The material, called solution-deposited beta-alumina, could have important applications in transistor technology and in devices such as electronic books.

The discovery is described in the November issue of the journal Nature Materials and appears in an early online edition.

“This form of sodium beta-alumina has some very useful characteristics,” said Howard E. Katz, professor and chair of the Department of Materials Science and Engineering in the Whiting School, who supervised the research team. “The material is produced in a liquid state, which means it can easily be deposited onto a surface in a precise pattern for the formation of printed circuits. But when it’s heated, it forms a solid, thin, transparent film. In addition, it allows us to operate at low voltages, meaning it requires less power to induce useful current. That means its applications could operate with smaller batteries or be connected to a battery instead of a wall outlet.”

The transparency and thinness of the material—on the order of only 100 atoms thick when hardened—make it ideal for use in the increasingly popular e-book readers, which rely on see-through screens and portable power sources, Katz said. He added that possible transportation applications include instrument readouts that can be displayed in the windshield of an aircraft or a ground vehicle.

The emergence of sodium beta-alumina as an insulator was a surprising development, Katz said. The compound, known for decades, has traditionally been used to conduct electricity and for this reason has been considered as a possible battery component. The material allows charged particles to easily flow parallel to a two-dimensional plane formed within its distinct atomic crystalline arrangement. “But we found that current does not flow nearly as easily perpendicular to the planes, or in unoriented material,” Katz said. “The material acts as an insulator instead of a conductor. Our team was the first to exploit this discovery.”

The Johns Hopkins researchers developed a method of processing sodium beta-alumina in a way that makes use of this insulation behavior occurring in the form of a thin film. Working with the Johns Hopkins Technology Transfer staff, Katz’s team has filed for international patent protection for their discovery.

The lead author of the Nature Materials paper is Bhola N. Pal, who was a postdoctoral fellow in Katz’s laboratory. In addition to Katz, the co-authors were Bal Mukund Dhar, a current doctoral student in the lab, and Kevin C. See, who recently completed his doctoral studies under Katz.

Funding for the research was provided by the U.S. Department of Energy, U.S. Air Force Office of Scientific Research and National Science Foundation.