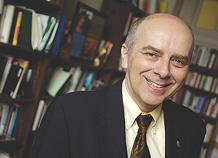 'The decline of civility is a social phenomenon that is being discussed now with the frequency and intensity that was not there 10 years ago,' says P.M. Forni, a professor of Italian literature in the Krieger School of Arts and Sciences. Photo by Will Kirk/Homewoodphoto.jhu.edu

Though Pier Massimo Forni may jokingly refer to himself as “a self-appointed manners maven,” he takes civility studies very seriously. Ten years ago this fall, Forni co-founded the Johns Hopkins Civility Project — now known as the Civility Initiative at Johns Hopkins — and heightened the awareness of our need to be kind to each other.

“The decline of civility is a social phenomenon that is being discussed now with the frequency and intensity that was not there 10 years ago,” said the professor, who is known professionally as P.M. Forni. “That’s a good thing.”

Forni certainly has done his part to make that happen. There are almost 100,000 copies in print of his 2002 book, Choosing Civility: The Twenty-five Rules of Considerate Conduct. It has been translated into Italian and German, with a Chinese translation in the works. Its follow-up, The Civility Solution: What to Do When People Are Rude, will be published by St. Martin’s Press next spring. In addition to adding his own writing to the discourse, Forni has been busy collecting hundreds of books and thousands of articles to build a civility archive at Johns Hopkins that is in the process of being digitized and stored in the university’s library.

“Professor Forni and the Johns Hopkins Civility Project have been recognized here and abroad for bringing serious thought and study to the important issue of civil behavior in contemporary society,” said President William R. Brody on the occasion of the anniversary. “The work done here at Johns Hopkins University, and the avid interest it has sparked, indicate that this subject is terribly important to us all. I congratulate Dr. Forni for reminding us that civility is not a narrow code of conduct expected of a few but an obligation we all share.”

Forni recently sat down with The Gazette in his Gilman Hall office to discuss his devotion to the art of kindness and civility, and how it intersects with his role as a professor of Italian literature in the Department of German and Romance Languages and Literatures in the Krieger School.

Q: What led you to civility studies?

A: I was teaching my Dante’s Divine Comedy course to my students one day, here on the Homewood campus, and I looked at them and a thought occurred to me that had never occurred to me before. The thought was, I want my students to know everything that there is to know about Dante, but even if they did and then they went out to be unkind to a little old lady on a bus, I would think that I had failed as a teacher. It was an odd thought, and it stayed with me. And it made me think, What if kindness is as important as art? What if kindness is more important than art, for that matter? I eventually felt comfortable pursuing work on civility not only as a researcher but as an advocate.

Q: What prompted you to start the Johns Hopkins Civility Project?

A: When we [Forni and co-founder Giulia Sissa, then chair of the Department of Classics and now a professor at UCLA] started the project in 1997, civility was hardly part of the national discussion agenda. Yet, I kept arguing to anybody willing to listen that civility was an important, underutilized resource. I had the good fortune that some people at the university listened and provided us with the means of starting research and community outreach activities centered around the notions of civility, manners and politeness.

Q: What is the Civility Initiative up to these days?

A: Over the years, we partnered with the Jacob France Institute at the University of Baltimore. First, we did the Baltimore Workplace Civility Study. And we recently started to disseminate the results of a new study, called “The Terrible Ten,” which is about the behaviors that Americans believe to be the rudest.

Q: What did the results tell you?

A: At the top of the list is rudeness involving strangers or co-workers. No. 1 is discrimination in an employment situation, No. 2 is erratic or aggressive driving that endangers others, and No. 3 is taking credit for somebody else’s work. That is a complaint that comes up over and over again. It’s a common one, together with treating service providers as inferiors.

Q: What did you expect the survey to tell you?

A: I must say that I didn’t have precise expectations, but I was struck by how on the side of the workplace these behaviors are. And in reality, so much of our time is spent at work — we work at work, we socialize at work, we goof off at work, we eat at work, sometimes we sleep at work. And so work is life, and we find that it impacts us very much, and we have confirmation of this fact in “The Terrible Ten.”

Q: How do people usually handle incivility in the workplace?

A: People will complain a lot É but not to the person who has made the transgression. We complain about that behavior with somebody else because we want to avoid a confrontation. And it’s really not a good idea.

Q: Why go out on a limb to confront somebody?

A: We teach others how to treat us by how much we are willing to endure from them. It is better not to endure even micro-indignities if they are really bothering you. Find the strength of character to confront that person in an assertive, nonaggressive way and say, “This is what I feel. This is how I feel when you say that, when you do that. I really wish you didn’t.” If you keep everything bottled inside, that person will do it again. And again. And again. And some day you explode. And at that point, the other person will say, “What is this? You never told me that this bothered you so much. How was I supposed to know?” So now you are doubly at fault, first because you’ve exploded, and then because you didn’t say what you felt when you were the victim of that behavior.

Q: Do your two specialties — Italian literature and civility studies — ever intersect?

A: This semester I’m teaching Italian Matters, Italian Manners, which is a course for undergraduates in which we read a book of manners from every major period of Italian culture, and we use it as a window of society; in the spring, I’ll be teaching a course for our graduate students on books of conduct of the Italian Renaissance. So I am wearing these two caps. I continue to do my work in Italian literature; I direct the Civility Initiative at Johns Hopkins. And whenever possible, I put the two together. After 10 years of living and breathing civility, I’m still not tired of it. I’m still enthusiastic. I still get up in the middle of the night eager to start working on these projects.

Q: It sounds like civility studies led you to a renaissance of your own.

A: They did energize and motivate me. I needed something else in my life together with literature, and I discovered that this something I needed was in the realm of ethics rather than in the realm of aesthetics. I think that in the first part of our lives, we tend to pursue beauty, and in the second part of our lives our interests turn to goodness. Working with this wonderful form of gracious goodness that we call civility presented itself as the obvious choice for me — and I never looked back.