35 years of innovation at work

Jhpiego marks milestone in its growth

Leslie Mancuso took the helm of Jhpiego, the international nonprofit health organization affiliated with The Johns Hopkins University, at a crossroads in its history.

Mancuso, who became president and CEO of Jhpiego in 2002, called it “a time of reflection.”

Jhpiego at this juncture was predominantly funded by grants from the U.S. Agency for International Development. All four awards from USAID, however, were set to end within 18 months, and the number of staff worldwide had been reduced to a near all-time low of 194. 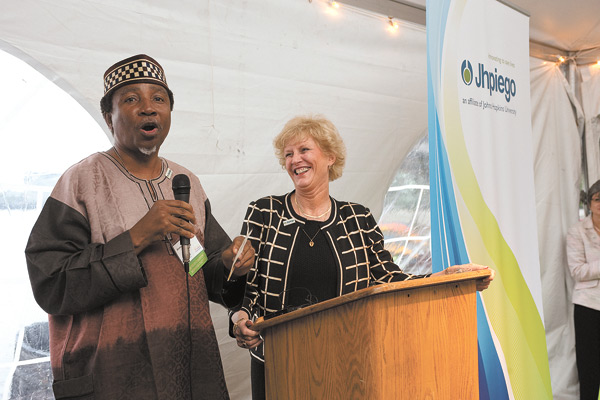 “We needed to figure out what to do,” said Mancuso, who brought with her more than 20 years of experience in the world of international health as both a nurse practitioner and leader renowned for her business acumen. “We had this internationally known brand and effective capacity, but we needed to ask ourselves, How can we grow this organization and make it sustainable? We needed to position Jhpiego for the long term so that it will always be here to serve low-resource countries.”

Jhpiego began to reach out to other funding sources and develop a new strategic plan– completed in 2007–to expand its services.

In terms of results, the numbers speak for themselves. Under her leadership, Jhpiego has grown from a $5 million to a $75 million organization, increasing its programs from four to 70. It now employs nearly 600 staff in 55 countries.

Mancuso and others took time to herald this period of growth and the future last week at the organization’s 35th anniversary celebration, held at Jhpiego’s headquarters in Fells Point. Hundreds attended the event, including university administrators and directors of health programs who came from around the world, including Malawi, India, Nigeria and the Philippines.

At the event, Mancuso praised the staff here and abroad for their tireless efforts to the organization’s “simple” mission.

“We are about saving women and families’ lives,” she said. “They don’t need to die. We believe this. If a mother lives, her children are more likely to live. If the children live, the family will be intact. If the family is intact, there will be a community. It affects the nation. It affects the world. Jhpiego has stood by that principle from the beginning. We stand by that principle today.”

Jhpiego (pronounced “ja-pie-go”) was founded in 1974 to improve health care access for women and their families. The organization works to empower front-line health workers by designing and implementing effective, low-cost, hands-on solutions to strengthen the delivery of health care services for this often underserved population.

The name originally stood for Johns Hopkins Program for International Education in Gynecology and Obstetrics, and was known as JHPIEGO. Last year, the organization decided that the acronym was obsolete and that it should morph into the lowercased word by which it had become known worldwide. In addition to the subtle name change, Jhpiego last year adopted a new mission and vision statement, redesigned its Web site and created a new logo, which uses the phrase “innovating to save lives.”

The organization was founded by a group of Johns Hopkins physicians led by Theodore King, chairman of the Department of Gynecology and Obstetrics and vice president for medical affairs at The Johns Hopkins Hospital. King and his fellow physicians wanted to create an organization that focused on family planning and reproductive health in low-resource settings.

King was the moving force behind the conception, establishment and funding of Jhpiego, and served as both a trustee and its president.

In a 1991 tribute to King, former Jhpiego Director Ronald T. Burkman said, “Throughout his career, Dr. King made the care of the disadvantaged, whether it be a pregnant adolescent in Baltimore or a Turkish mother of five, a priority. He often commented that one of the rules of educational institutions was to shorten the time span between discovery of a useful medical advance and its introduction in the field, particularly at a grassroots level.”

The organization takes evidence-based health innovations, mostly developed at Johns Hopkins, and helps put them into everyday practice for the world’s most vulnerable populations.

From its origins as a provider of technical expertise in reproductive, maternal and child health, Jhpiego now also assists in the prevention and treatment of HIV/AIDS, tuberculosis, malaria and cervical cancer, reflecting the increasing interconnectedness of global health.

Jhpiego partners with organizations from the community to the national level, building sustainable, local capacity through advocacy, policy development, and quality and performance improvement approaches. In a South African clinic, for example, HIV-positive women are screened for cervical cancer with visual inspection using vinegar, an inexpensive alternative to the Pap smear, and treated in one visit.

The organization, which reports to the Office of the Provost, focuses on training and support for health care providers working in limited-resource settings throughout Africa, Asia, the Middle East, Latin America and the Caribbean. Jhpiego’s headquarters in Baltimore coordinates the activities of the organization’s foreign offices and programs.

As an affiliate of the university, Jhpiego has access to world experts from the schools of Engineering, Medicine, Nursing and Public Health to help support its overseas work.

“We are the practice side of the university,” said Mancuso, who prior to joining Jhpiego spent 13 years with Project HOPE, serving as its COO and then CEO. “We are trying to figure out how you take that science and innovation and make it work in places like Rwanda and Liberia. It’s a great story of Johns Hopkins. Faculty from our schools can witness firsthand what happens when their knowledge is used in practice.”

Using a standards-based management approach, Jhpiego has transferred skills in providing quality health services to more than 25,000 health care professionals in more than 140 countries. For example, Jhpiego has trained more than 60 percent of the midwives in Afghanistan.

“Every time I go out into the field, I run into people who tell me they’ve been trained by Jhpiego at some point. They also share stories about how they used this information to teach others. I hear things like, ‘Everything I know about reproductive health, I’ve learned from you.’ I can’t tell you how great it is to hear that.”

Mancuso said that a new effort for Jhpiego has been communicating its story.

“In recent years, we have expanded programmatically, expanded financially and diversified our funding base,” she said. “In the past, we didn’t talk about ourselves. But now it’s time to let the world know.”

For more information on Jhpiego and its work, go to www.jhpiego.org.