Six graduates of SAIS' Bologna Center joined a long tradition on May 29, when they were crowned with aromatic laurel wreaths. 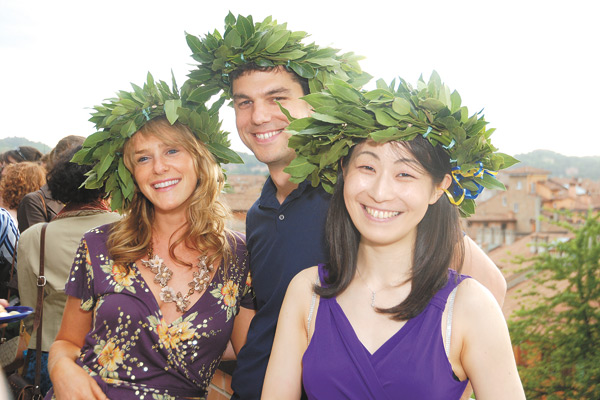 The original Greek Olympians wore them, as did Roman conquerors, the orator Cicero and the poet Dante. And we derive the word laureate from them, the wreaths of laurel leaves that signify wisdom, victory and success.

Six graduates of SAIS’ Bologna Center joined the long tradition on May 29, when they, too, were crowned with the aromatic green wreaths.

The tradition of awarding laurel wreaths at the Bologna Center began in 2004. “The majority of our students are only halfway through their studies, so the Bologna Center commencement is an informal occasion,” says Veronica Pye, academic and student affairs coordinator, who wanted to make the ceremony special for the half-dozen or so students who actually complete their studies at the center. “I was looking for a distinguishing sign to make up for the fact that we do not use gowns, hoods and mortar boards like a traditional ceremony does,” she says. “The wreaths were an obvious choice.”

Pye orders the wreaths from a flower stall in the city’s ancient marketplace. The florist makes the circle from fresh laurel branches and decorates them with a bow of electric blue and gold, the colors of the School of Advanced International Studies. During the ceremony at the Bologna Center, the director crowns each graduate with the wreath, which he or she wears for the evening.

Throughout the ages, academic laurel wreaths have usually been reserved for students earning the master’s degree, but the Bologna Center broke with tradition this year when it wreathed Sara Konoe, who completed the last year of her doctoral program at the center, thus becoming the school’s first PhD. 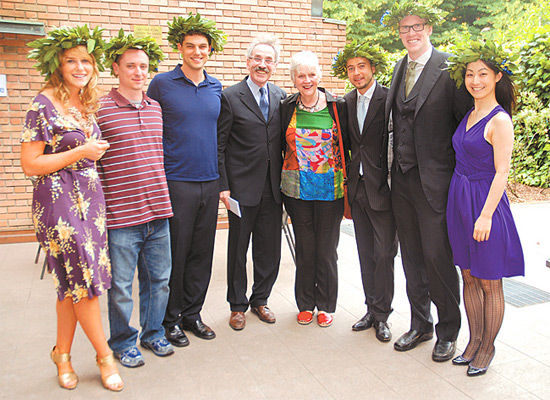 The recent Bologna Center tradition also reflects the larger academic community in which it resides. In the Italian university system, students graduate individually and throughout the year. Almost daily the streets of the university quarter ring with the singsong “dottore, dottore” as a newly crowned laureate from the University of Bologna leads a procession of friends and family to a local restaurant or bar for celebration.

“It is only fitting that the Bologna Center honors its graduates in this way,” says Kenneth H. Keller, director. “After all, we are located in the heart of the University of Bologna complex, the oldest continually operating university in the world.”

In addition to Konoe, the students who earned their graduate degrees at the Bologna Center were Morgan Fiume and Jeffrey Brown (MIPP), Thomas Furcher (MAIA/DA joint degree) and Richard Lechowick and Julia Romano (MA).