With medical science on the verge of numerous breakthroughs to cures and treatments for a host of human diseases, a coalition of research organizations led by The Johns Hopkins University and four other founding partners is striving to make sure that ample federal funds to fuel such discoveries are there now and into the foreseeable future. 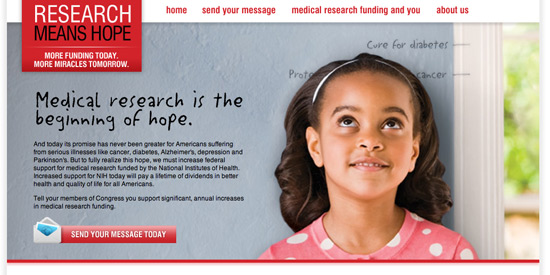 Prior to the passage of the federal government’s economic stimulus package that included $10 billion in short-term funding for the National Institutes of Health, NIH was in the midst of a six-year period of nearly flat funding.

Two years ago, faced with the trend in federal support, the biomedical research community began to explore new advocacy strategies to achieve sustained, real growth in the NIH budget.

Out of this effort emerged Research Means Hope, a campaign to build grassroots support for sustained increases in NIH funding in targeted congressional districts and to cultivate additional champions for NIH in Congress.

The pilot phase of the campaign, which began in mid-April, has been reaching out to opinion leaders through newspaper and radio advertising in two initial targeted districts–one in South Carolina and the other in California–as well as by electronic and social media, such as e-mail, Facebook and Twitter. The concept is for the public to impress upon their influential legislators the compelling need for research and bring it more into the public consciousness.

A Web site has been created to provide a national presence for the campaign. The site, located at www.researchmeanshope.org, includes a suggested letter to e-mail to federal legislators to ask them to support significant, annual increases in medical research funding. The form also allows users to draft their own personal message to Congress and sign up for regular campaign updates.

Coalition members say they believe that this innovative approach will provide an opportunity for collaborative action and increase public awareness of the NIH.

The print ads begin with the phrase “Medical research is the beginning of hope” and tout the promise of investments in federal funding to help find treatments, therapies and cures for such diseases as Alzheimer’s, diabetes, breast cancer and Parkinson’s.

As of June 2, the site had had more than 5,600 visits, and the Facebook page had 547 fans. To date, 354 messages have been sent to Congress. The campaign hopes to amplify these results by using Facebook and Twitter.

The targeted advertising effort ran through the first week of June. The online effort will continue with the goal of influencing the fiscal year 2010 budget cycle.

After evaluation of the pilot phase, the campaign might be expanded to other markets that fit the overall strategic approach.

The coalition leadership encourages all those in the Johns Hopkins community to participate in the campaign and spread the word. To join the effort and for more information, go towww.researchmeanshope.org.