The popular belief that healthy eating starts at home, and that parents’ dietary choices help children establish their nutritional beliefs and behaviors, may need rethinking, according to a study by researchers at the Johns Hopkins Bloomberg School of Public Health.

An examination of dietary intakes and patterns among U.S. families found that the resemblance between children’s and their parents’ eating habits is weak. The results are published in the May 25 issue of Social Science and Medicine. 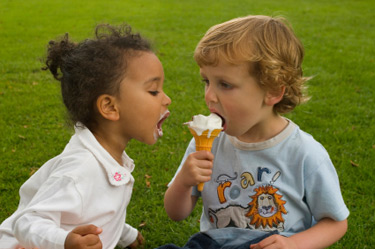 “Child-parent dietary resemblance in the U.S. is relatively weak and varies by nutrients and food groups and by the types of parent-child dyads and social demographic characteristics such as age, gender and family income,” said Youfa Wang, senior author of the study and associate professor with the Bloomberg School’s Center for Human Nutrition. “When looking at overall diet quality, parent-child correlation in healthy eating index score was similar for both younger and older children. To our knowledge, this is the first such study that examined the similarities between children’s and their parents’ dietary intakes in the United States based on nationally representative data. Our findings indicate that factors other than family and parental eating behaviors may play an important role in affecting American children’s dietary intakes.”

Researchers examined data from the U.S. Department of Agriculture Continuing Survey of Food Intakes by Individuals, a nationally representative multistage sample of 16,103 people containing information about dietary intake, socioeconomic, demographic and health parameters surveyed from 1994 to 1996. Average dietary intake and dietary quality indicators were assessed using two 24-hour dietary recalls provided by study participants. Researchers also assessed the overall quality of the participating children’s and their parents’ diets based on the USDA 2005 Health Eating Index along with a number of other covariates. They found that the correlations between children’s and their parents’ HEI scores ranged from 0.26 to 0.29 across various child-parent dyads such as mother- daughter and father-son; for total energy intake, they were 0.14 to 0.29 and for fat intake, -0.04 to 0.28. The range of the correlation measure is between -1 and 1, while 0 means no resemblance and 1 indicates a perfect resemblance. The researchers also found some differences in the resemblance between different types of child-parent dyads and nutrient intakes, and by children’s age and family income.

May A. Beydoun, co-author of the study and a former postdoctoral research fellow at the Bloomberg School, said, “Factors other than parental eating behaviors such as community and school, food environment, peer influence [and] television viewing, as well as individual factors such as self- image and self-esteem seem to play an important role in young people’s dietary intake.”

“Our findings have a number of important public health implications,” Wang said. “In particular, the overall weak to moderate parent-child resemblance in food groups, nutrients and healthy eating index scores suggests that interventions targeting parents could have only a moderate effect on improving their children’s diet. Nevertheless,” he said, “based on our findings stratified by population groups, for interventions targeting parents, those would be more effective when targeted at mothers, minority groups and as early as possible in childhood. We suspect that the child-parent resemblance in dietary intake may have become weaker over time, due to the growing influence of other factors outside of the family.”

The research was supported in part by the National Institutes of Health, Eunice Kennedy Shriver National Institute of Child Health and Human Development, U.S. Department of Agriculture and Johns Hopkins Center for a Livable Future.