A JHU professor and his students played key roles in deploying the world's deepest diving vehicle to explore the remote depths of the Mariana Trench.

A Johns Hopkins professor and his students played a key role recently in deploying the world’s deepest diving vehicle to explore the remote depths of the Mariana Trench in the western Pacific Ocean.

Louis Whitcomb, a professor in the Whiting School’s Department of Mechanical Engineering, was co-principal investigator on a team that successfully guided a new type of deep-sea robotic vehicle, called Nereus, into the deepest part of the world’s oceans. The team reported that on May 31 Nereus successfully dived 6.8 miles at the Challenger Deep in the Mariana. 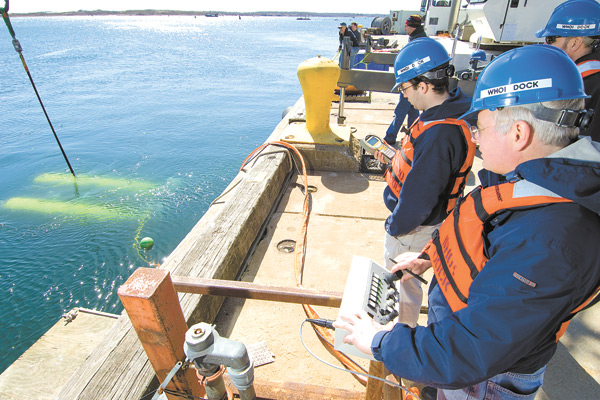 The unmanned Nereus spent more than 10 hours on the bottom, sending live video back to the ship and collecting biological and geological samples with a manipulator arm. It also placed on the sea floor a marker signed by those onboard the surface ship.

As the vehicle descended, crew members on the surface were filled with “cautious optimism,” Whitcomb told a Baltimore Sun reporter in an e-mail interview from the ship. “It is a humbling experience to remotely pilot a vehicle into such an extreme hostile lightless environment where temperature is 2 degrees C and the pressure is 1,100 times the pressure we experience on the Earth’s surface.”

Nereus dived nearly twice as deep as other research submarines are capable of and had to withstand crushing forces. When it arrived safely at the sea bottom, “a burst of cheers” erupted from the surface team, Whitcomb wrote.

Only two other vehicles had previously succeeded in reaching the Mariana Trench: the U.S. NavyÃsponsored bathyscaphe Trieste, which carried two explorers there in 1960, and the Japanese- built robot Kaiko, which made three unmanned expeditions to the trench between 1995 and 1998. Trieste was retired in 1966, and Kaiko was lost at sea in 2003.

The Nereus project team included the Woods Hole Oceanographic Institution, where Whitcomb, a leading undersea robotics researcher, also serves as an adjunct scientist, and the U.S. Navy’s SPAWAR System Center. Whitcomb was one of the primary developers of Nereus’ navigation and control systems, which were developed in Whitcomb’s Homewood campus lab.

Nereus boasts an unusual hybrid design, meaning it can operate in two modes. In its tethered mode, it is guided remotely from a surface ship via a lightweight micro-thin fiber-optic tether. This tether also allows the vehicle to send real-time video and other data to the surface as it explores largely inaccessible regions. It also can operate in an untethered, free-swimming mode, but this option was not used during this mission.

The primary funding source for the $8 million project was the National Science Foundation. Other financial support came from the Office of Naval Research, the National Oceanic and Atmospheric Administration, the Russell Family Foundation and Woods Hole Oceanographic Institution.