While many of the nation’s academic publishers struggle in the current economy, the Johns Hopkins University Press flourishes, thanks in large part to a leader who has positioned the institution squarely in the 21st century.

Kathleen Keane became director of the JHU Press in 2004, a pivotal time in its history. The Press had just celebrated its 125th anniversary, and many saw a sea change on the horizon for the industry as a whole. 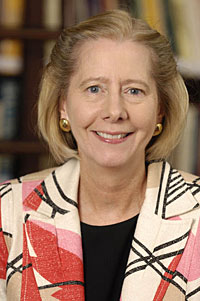 Academic publishers faced the challenge of maintaining the proper balance between commercially viable activities and certain books and monographs that, while providing essential scholarship, were increasingly hard to subsidize. In addition, the writing was on the wall in terms of the rising interest in electronic publishing.

In the announcement of her appointment, Keane said that she relished the opportunity to lead the Press forward into the next era. Fast-forward five years, and the next era might well be upon us.

Keane, who on June 20 began a one-year term as president of the Association of American University Presses, has led a continuing transformation of the JHU Press’ business model and offerings during a trying time in the industry, as most publishers have been hit hard by the recession. University press sales were down on average 10 percent this past fiscal year, but Johns Hopkins weathered the storm without a precipitous decline.

During Keane’s tenure, the Press has published more than 1,000 new books, many receiving important awards and high-profile reviews, and 19 titles have been added to its journals program.

While it continues to put out scholarly works by Johns Hopkins faculty and other noted authors, the Press has in recent years greatly expanded its mass-audience output and been at the forefront of electronic scholarly publishing, including online journals, books and references.

“Kathleen has done a remarkable job for us in many directions,” said Alfred R. Berkeley, chair of the JHU Press’ advisory board and a university trustee. “For one, she has taken a publisher that was in some financial straits and made it quite profitable. She has also increased in number and quality the works we publish. I can tell you that she’s very financially astute and tuned in to the modern world of publishing.”

Keane said that a key to the Press’ ability to maintain its strong financial position has been its diversification.

“Our size is a great asset. We continue to put out a large range of journals and books and have made a great deal of investment in electronic publishing. We have grown every year in that area,” Keane said. “We want to give people options.”

Keane served for the past year as president-elect of the Association of American University Presses and has been a member of its board of directors for several years.

Formally established in 1937, AAUP promotes the work and influence of university presses and helps its 128 member presses fulfill their common commitments to scholarship, the academy and society. The president of AAUP serves a one-year term and acts as a spokesperson for and an advocate of university presses and works with the executive director and board of directors to set the direction and immediate goals of the organization.

“I am honored to accept this position,” Keane said, “and I am proud of the AAUP’s ongoing efforts to advance scholarly publishing and serve the very accomplished and collegial community of member presses.”

Keane joined the Johns Hopkins University Press in September 2002 as director of finance and operations. In 2004, she became the first woman to lead the Press and its staff of 140.

The Johns Hopkins University Press is the oldest academic press in the country. Founded in 1878 at the behest of university President Daniel Coit Gilman, it began its life as the Publishing Agency, an entity created to provide scholarly journals for the fledgling Johns Hopkins and its faculty.

Today, in addition to scholarly books, journals and monographs, the Press publishes works for a general audience, including health, regional history and trade reference books.

In her role as director, Keane oversees a large and diverse publishing operation: a book division that publishes 200 new titles annually; a journals division that manages publication of 70 scholarly periodicals; Project MUSE, an online collection of 450 scholarly journals; and a fulfillment and customer services operation that also serves 16 client presses.

Notably, the Press recently made available online The Early Republic: Critical Editions on the Founding of the United States, 17 volumes of primary material documenting the actions, debates and thoughts of the First Federal Congress (1789–91) and its members. These important documents—17,000 annotated pages and 250 images that have been published over a number of years—are now fully accessible electronically, bringing a rich legacy to the fingertips of a new generation of students and scholars.

“We wanted to make access to this wealth of material a lot easier,” Keane said. “We’re very proud of this collection. This is our fifth such online reference, and it’s a big step forward for the Press.”

The Early Republic joins a suite of online references that includes The Papers of Dwight David Eisenhower, The Encyclopedia of American Studies, The Johns Hopkins Guide to Literary Theory and Criticism and the World Shakespeare Bibliography. All of the Press’ online reference works are made available on a yearly subscription basis.

In terms of e-book publishing, the Press has to date made more than 200 books available for individual purchasers via Kindle, Amazon’s wireless electronic reading device, and is currently testing its own e-book program for institutional purchasers, which it hopes will be ready for use in 2010.

“We’re testing the waters with Kindle, and I anticipate us expanding in the e-publishing area,” she said. “Of course, we are also always on the lookout for interesting authors and good subjects. We never lose sight of that.”

“We recognize that we cannot be the full-service publisher for each of them, but I would like the JHU Press to be increasingly helpful to the local faculty, either simply as adviser or as publisher.”

For more on the Johns Hopkins University Press and to order items from its catalog, go to www.press.jhu.edu.