Philip D. Curtin, the Herbert Baxter Adams Professor of History at Johns Hopkins from 1975 until his retirement in 1998, died on June 4 in Kennett Square, Penn.

“For more than half a century, his was an original, provocative and deeply erudite scholarly voice in the study of African and comparative world history,” said his colleague Sara Berry, a professor of history in the Krieger School of Arts and Sciences at Johns Hopkins. “Begun at a time when the African past was generally neglected, and sometimes belittled in the Western historical canon, his scholarly writings spanned the African continent and its place in the world, delving into subjects that ranged from trade and navigation, slavery and the slave trade to the political history of the Senegambia before the imposition of colonial rule. The field will not be the same without him.” 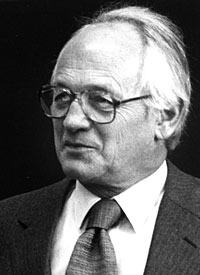 “Once he had established himself as the foremost African historian in the United States, he extended his range to world history,” William T. Rowe, chairman of the History Department at Johns Hopkins, told The New York Times. “He was a proselytizer for a kind of world history that treated every human society with equal dignity and equal weight, interacting with each other and having indigenous processes of change, not simply waiting for the Europeans or the Arabs to arrive.”

Author of dozens of scholarly books and articles, Curtin also trained several generations of historians of Africa, holding students to his own exacting standards of systematic inquiry, factual discovery and clarity of exposition.

Writing on the blog of the American Historical Association, Paul Lovejoy, director of the Harriet Tubman Institute and a former student, said, “His research in demography revolutionized the study of the enforced migration of African peoples. His work in comparative history, epidemiology and economic history has become standard reference for historians and other scholars in many fields of enquiry. I am humbled to have been one of his students and to have benefited from his scholarship. He inspired people, he worked hard, and he has left a strong legacy.”

Born in Philadelphia in 1922, Curtin served in the Merchant Marine during World War II, graduated from Swarthmore College and received his doctorate from Harvard University in 1953. Before coming to Johns Hopkins, he taught at Swarthmore and the University of Wisconsin. The recipient of MacArthur and Guggenheim fellowships, and a member of the American Academy of Arts and Sciences, he also served as president of the American Historical Association in 1983.

He is survived by his wife, Anne Curtin, and their three sons; two brothers; and three grandchildren.