SAIS recognized two of its outstanding faculty members during Commencement ceremonies at the Bologna Center in Bologna, Italy, on May 29. Thomas Row was acknowledged for his teaching excellence in a large class, while Winrich Kuehne received the honor for a small class. The awards, which SAIS has designated for Bologna Center faculty, are part of the Johns Hopkins Alumni Association Excellence in Teaching Awards program and are not announced until Commencement.

“We traditionally reserve these awards for the adjunct faculty members, a talented cadre of about 35 professors who come from all over Europe to teach our students,” says Kenneth H. Keller, director. “They are the often unsung heroes who can make a huge impact in a student’s life.”

A passion for history expressed both in the classroom and on his famous walking tours of Bologna and beyond has earned Thomas Row the Alumni Association’s Excellence in Teaching Award for a large class.

Row, a senior adjunct professor of European studies, was honored for teaching Evolution of the International System, a core course that is one of four considered fundamental to the SAIS degree. It presents a broad sweep of the history of international relations from the Peace of Westphalia to the Cold War. 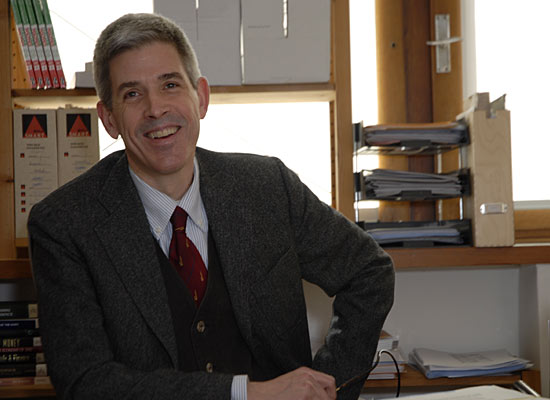 Thomas Row travels from Vienna to Bologna, where he often leads walking tours.

An engaging teacher, Row gives lessons large and small, whether in the auditorium at the Bologna Center or at a bistro table overlooking Bologna’s main piazza. He has trooped hundreds of alumni, students and friends through the streets of the city, gesturing at a grand church or pointing to a small unit of medieval measurement encased for centuries in the brown brick facade of the town hall.

Row came to the Bologna Center after graduating from Johns Hopkins’ Krieger School of Arts and Sciences and received his doctorate from SAIS (with distinction) in 1988. He returned as resident assistant professor from 1993 until he left in 2003 to become professor and chair of Contemporary History at the Diplomatic Academy in Vienna, Austria. This spring he flew to Bologna every week to teach the late-afternoon course on Friday, usually not a popular time for a lecture. But he always packed the auditorium.

After receiving his doctorate, Row was a research fellow for the Giovanni Agnelli Foundation. He has also taught at the Robert K. Nilsson Center for European Studies, Dickinson College and Johns Hopkins’ Villa Spelman in Florence. He has written on Italy in the international system, Italian propaganda in the Great War, and Italian and European identity. He also served as historical consultant for a series of documentaries on the History Channel, including programs on Anzio, Cassino, the Gothic Line and the Russian Front. He is currently researching a general history of Italy during World War I.

Row has directed his award money to the Fred Hood Memorial Fund in honor of a Bologna Center graduate student who was killed in an avalanche this past Christmas Eve. “Fred was one of the brightest and most engaging students I have taught,” recalls Row. “He went on to become a brilliant teaching assistant for the Evolution course. We all miss him very much.”

Winrich Kuehne corrals the vast territory of sub-Saharan Africa and brings it home to a small classroom in Bologna. His ability to marry theory with practice in the course War and Conflict Resolution in Sub-Saharan Africa has earned him the Excellence in Teaching Award for a small class at the Bologna Center.

One student described him as a “brilliant professor with a vast amount of knowledge who can somehow bring it into the discussion in a dynamic yet not overwhelming way. This says a lot considering the breadth of the topic we cover.” 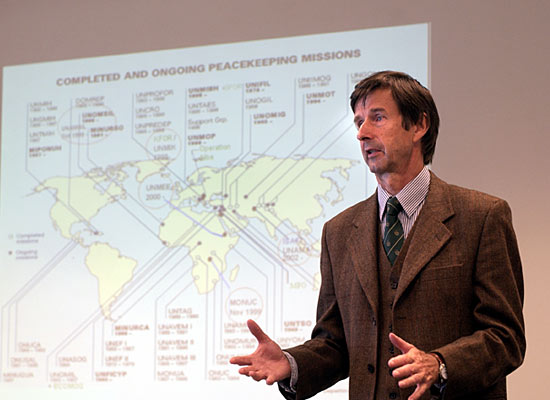 Winrich Kuehne commutes from Germany to teach a course on sub-Saharan Africa.

Kuehne, an adjunct professor of international relations, lives in Germany, teaching at the Bologna Center every two weeks, but his extensive involvement in the developing nations of Africa has helped him translate his experience to students. His methodology, he says, is to present students with practical experiences that challenge established academic theories of learning.

Using case studies of African states and societies in conflict, such as Somalia, Sudan and the Democratic Republic of Congo, he says he tries to get students to understand the complex root causes and dynamics of a conflict. “And then I strive to help them realize that even after thinking they have reached an understanding, they still have a long way to go before managing and solving the conflict.”

Kuehne’s experience in and dedication to Africa comes partially from his father, who spent some years of his life in Namibia in the 1930s, but also from his posts first as the head of the Africa Department of SWP (Stiftung Wissenschaft und Politik), a think tank advising the German administration and parliament on issues of international peace and security, and, since 2002, as director of the German Center for International Peace Operations, or ZIF, as it is commonly known. “Our organization trains and provides personnel for peace operations and election observations, among other things, at the Kofi Annan International Peacekeeping Training Centre in Accra, Ghana. This provides us with lots of lessons learned from field experience, a mix of practical experience and academic analysis. And this is what I try to bring to the classroom,” he says.

Kuehne received his doctorate in international law from the University of Munich. He has served in several consultancy and advisory capacities, including consultant to the European Parliamentarians and on U.N. peacekeeping measures as well as adviser to the European Union’s crisis prevention network and to the German Foreign Office on African issues. He is also former deputy director of the German Research Institute for International and Security Affairs, and he has been an election observer in Malawi and South Africa.

Kuehne, recently retired as director of ZIF, continues researching, writing and teaching. He returns to the Bologna Center this fall as the holder of the Steven Muller Chair in German Studies, which is named in honor of the former president of Johns Hopkins.

“I was surprised and honored when I learned of the award,” Kuhne said of his teaching recognition. “I so much enjoy teaching Bologna Center students. They come from such diverse backgrounds, and their engagement in the classroom both challenges and inspires me.”

Kuehne has donated his award toward helping an African student attend the Bologna Center.