In 1959, Johns Hopkins recruited a young phenom named Jim Coleman to establish a department in the social sciences. This year, the department turns 50. (Click for story)

In 1959, Johns Hopkins recruited a young phenom from the University of Chicago named Jim Coleman to establish a department in the social sciences at the university. Coleman, who had only four years earlier earned his doctorate in sociology from Columbia University, was already considered one of the country’s leading minds on education reform for disadvantaged youth and on the sociology of education.

(Coleman would cement his reputation two years later with the release of The Adolescent Society.  That study, which documented a pattern of widespread anti-scholastic sentiment among high school students, remains a standard reference on the topic.)

Although the department was interdisciplinary in nature, Coleman said at its dedication that he did not want to turn out “well-rounded” students per se. “There were already too many of them,” he said. Instead, he wanted sociologists with “sharp edges” and recruited students whose work was off the beaten path.

The department started modestly with three faculty and three students but steadily grew over the next decade. By 1974, the department was hailed as one of the top sociology programs in the United States, a distinction that holds true today.

This year, “the department that Jim Coleman built” turns 50. While much has changed, including its name, Coleman’s vision of an interdisciplinary department that emphasizes rigorous methods training and hands-on research has remained.

“That is one of Jim Coleman’s legacies, and it sets us apart from many other fine graduate programs,” said Karl Alexander, department chair and John Dewey Professor of Sociology. “The other aspect that sets us apart is the sociology of education as a core area of specialization. Other areas have come and gone as faculty have come and gone, but education is embedded in the department’s DNA, and I trust that my successor chair many years down the road will be saying the same when the department comes together to celebrate its 100th anniversary.”

The department initially included three disciplines: sociology, anthropology and social psychology. Anthropology, however, was slow to grow. The first faculty hire was not until 1963 and the second, six years later.

Coleman’s dynamic personality and focus on research in education attracted a number of passionate young faculty members and graduate students. Notably, Edward McDill came to Johns Hopkins on a postdoctoral fellowship in 1961 to work with Coleman. Two additional young scholars, Doris Entwisle and Robert Gordon, joined the department in the early 1960s and remained fixtures for the next three decades. 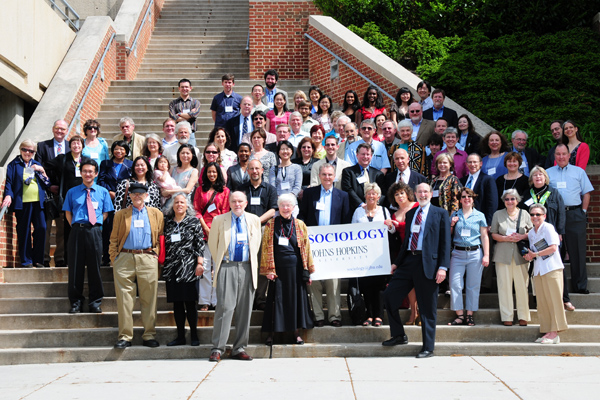 Present and past members of the department came together last month to celebrate its 50th anniversary.

In 1966, Coleman and McDill secured funding to launch the Center for Social Organization of Schools, which today is one of the leading education research and development centers in the world. CSOS maintains a staff of sociologists, psychologists, social psychologists and educators who conduct programmatic research to improve the education system, as well as full-time support staff engaged in developing curricula and providing technical assistance to help schools use its research.

The ties between the Department of Sociology and CSOS have always been close and mutually beneficial, according to Alexander.

McDill was CSOS director until 1969.The following year he became department chair, a position he would hold for the next 15 years.

By 1972, the department had 14 full-time faculty (nine of whom were sociologists) and began to offer an undergraduate major in sociology.

In three successive years, however, the department took some major blows. In 1972, Coleman left Johns Hopkins to return to the University of Chicago. A year later, another high-profile faculty member, Pete Rossi, left for the University of Massachusetts at Amherst. In 1974, anthropology spun off as a separate department.

“Looking back, this period shortly after my arrival was the department’s time of greatest stress,” said Alexander, who joined Johns Hopkins in 1972.  “A tiny department to begin with, what do you do when you lose your brightest stars?”

Alexander said that it was McDill’s and Entwisle’s steady leadership that held the department together and allowed it to rebuild.

In 1980, John Holland, a world-renowned vocational psychologist, retired. With Holland’s departure, the once diverse department now consisted mostly of sociologists, a factor that led to the name being changed in 1983 to the Department of Sociology.

Alexander said that changes since have been incremental and built around the department’s core commitment to state-of-the-art training in research methods as applied to problems of substance.

Notable hires during the 1980s included Alex Portes, Patricia Fernandez-Kelly and Mel Kohn. Portes and Fernandez-Kelly left for Princeton after 18 years, but Kohn, a past president of the American Sociological Association, remains on the faculty and this year was appointed to the  William D. and Robin Mayer Professorship.

In the early to mid-1990s, the department underwent considerable faculty turnover. “These losses were every bit as consequential as the ones we experienced during the ’70s, but this time the department left behind by our departed colleagues was much stronger up and down the line than the department of the 1970s,” Alexander said. “And we were vastly better positioned to manage what otherwise could have been, would have been, wrenching change.”

Alexander said that a consequential step in recovery was the hire of Giovanni Arrighi from SUNY-Binghamton in 1998. With Arrighi on board, the department quickly achieved recognition as one of the leading centers for world systems analysis scholarship.

The Department of Sociology currently concentrates on cross-national comparative research and social inequality. Its faculty continues to push the envelope on scholarship in the field.

Notably, in 2007 Arrighi published Adam Smith in Beijing: Lineages of the Twenty-First Century, the third volume of his authoritative trilogy on the rise, and possible impending demise, of world-scale capitalism.  Partly in recognition of this magisterial accomplishment, Arrighi, too, was appointed to a named professorship this year: the George Armstrong Kelly Professorship.

In 2008, assistant professor Stefanie Deluca was awarded a William T. Grant Foundation Faculty Scholars Award for her project “Moving Matters: Residential Mobility, Neighborhoods and Family in the Lives of Poor Adolescents,” just one of two such awards made by the foundation last year.

Recently, Andrew Cherlin, a member of the faculty since 1976, was named the 2009 recipient of the American Population Association’s Irene B. Taeuber Award, “given in recognition of either an unusually original or important contribution to the scientific study of population or an accumulated record of exceptionally sound and innovative research.” Cherlin’s latest book, The Marriage Go-Round (Knopf, 2009), has elicited rave reviews.

“It’s a mix that fits comfortably, but exactly how we present ourselves to the wider world in the future no doubt will shift again as interests and people change,” Alexander said. “‘But there are constants, too, and I trust that our fundamental character will hold steady. We are now, always have been, and I hope always will be, a small, supportive intellectual community with high standards and equally high accomplishment.”

A highlight of this year’s 50th anniversary celebration, held on May 9, was the announcement of the Doris Roberts Entwisle Graduate Teaching Fellowship.  This initiative, funded by Entwisle’s friends and admirers, celebrates her 40-plus years of scholarship and faithful service to Johns Hopkins and the department. It will support an advanced graduate student to teach an upper-division undergraduate course in the area of his or her dissertation research.