The Wilmer Eye Institute at Johns Hopkins celebrated the end of construction of its new building with a ceremony and ribbon cutting on June 10. (Click for story)

The Wilmer Eye Institute at Johns Hopkins celebrated the end of construction of its new building at The Johns Hopkins Hospital with a ceremony and ribbon cutting on June 10.

The 207,000-square-foot, $105 million ultramodern Robert H. and Clarice Smith Building, named for its leading donors, is on the corner of Broadway and Orleans Street and is angled precisely toward the historic Wilmer dome. Seen in the new building’s specially designed reflective windows, the image of the dome melds tradition and history with the modern. This facility is the first to be finished under the Johns Hopkins medical campus expansion project, which is scheduled for completion in summer 2011.

“This is a new beginning for the Wilmer Eye Institute at Johns Hopkins and the more than 14,000 patients that come annually to receive sight-saving operations from its world-renowned medical staff,” said Edward D. Miller, dean of the School of Medicine and CEO of Johns Hopkins Medicine. 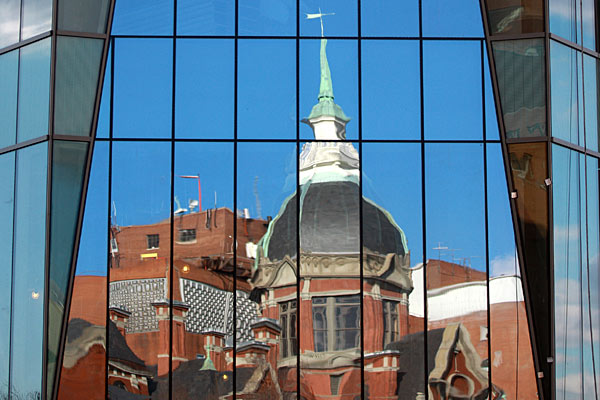 The historic Wilmer dome is reflected in the new building’s windows.

Peter J. McDonnell, the William Holland Wilmer Professor of Ophthalmology and director of the Wilmer Eye Institute, said, “The Maurice Bendann Surgical Pavilion within the new Wilmer building will have six of the most modern ophthalmic operating rooms in the world, allowing our surgeons to perform 50 percent more procedures each day. Surgeons, nurses and patients will each benefit from this tremendous environment.”

The new Wilmer building also will include five floors dedicated to collaborative research by clinicians and scientists, more than doubling the space devoted to what is already the largest eye-related research program in the country. “Our new building will help eliminate the major challenge that existed in Wilmer’s century-old original building: the separation of and lack of communication between senior and junior investigators working on vision research,” McDonnell said. “Our scientists and investigators will now be able to work side by side as they make new discoveries.”

A notable artistic feature of the new Wilmer building is a 36-foot, six-ton polished stainless steel sculpture titled Quest, which was created by the well-known American sculptor John Safer, a former patient. Safer came to Wilmer over a decade ago after being diagnosed with macular degeneration and was treated by Morton Goldberg, former head of the Wilmer Eye Institute. He also was treated for cataracts by eye surgeon Oliver Schein. Safer credits these treatments with his being able to continue his work, and he created Quest to show his appreciation.

Goldberg, who has been a driving force behind the construction of the new building, said of the statue, “Quest, which resembles a strand of DNA, truly symbolizes Wilmer’s mission of seeking new knowledge in the battle against vision loss.”

In addition, New York landscape artist Wolf Kahn, also a patient, has offered 16 of his paintings on extended loan to brighten the surgical waiting area.

The facility will be open to patients in August. The building dedication, set to coincide with the 80-year anniversary of Wilmer’s first dedication, will take place on Oct. 16.

For more on the Wilmer Eye Institute at Johns Hopkins, go to www.hopkinsmedicine.org/wilmer.