The Public Service Loan Forgiveness Option, which the Maryland congressman authored, allows individuals with qualifying debt to make regular loan payments over a 10-year period. If after that time the individual has made all of his or her payments and is still working in public service or the nonprofit sector, the federal government will forgive the remaining debt. Professions that qualify under the new program include teaching, civil service, public interest law and many health care jobs.

“Student loan debt can have a significant effect on career decisions, and I hope that this new law will allow college graduates to live by their dreams, not by their loans,” said Sarbanes, who spoke on July 1 at the School of Education. “This legislation helps ensure stability for student borrowers, allowing them to embark on careers in public service especially when our country needs public service employees the most. It does so by giving students and families more time and better conditions for repayment.” 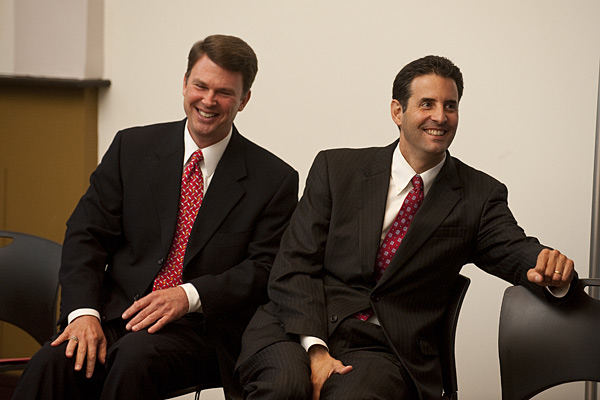 Joining Sarbanes at the event were U.S. Office of Personnel Management Director John Berry and university President Ronald J. Daniels, who characterized the new program as an opportunity to deploy our best and brightest and to put them to work to make a better world.

“Colleges and universities are in the business of preparing young people to make this world a better place. But college graduates who want to do exactly that sometimes run headlong into a huge problem: their student loans,” Daniels said. “These young people want to get out there and make a difference. They want to work in the public sector and help people. But they also need to make enough money to rent an apartment and eat … and to repay those students loans.”

All too often, though, the numbers don’t add up, Daniels said.

“Our graduates are reluctantly forced to consider jobs that pay the bills but don’t satisfy, in quite the same way, their desire to make a difference. That’s a shame. And Congressman Sarbanes, to his credit, recognized it as not just a shame but also as a lost opportunity.”

The loan forgiveness program was signed into law two years ago but did not go into effect until July 1 because funding and regulations had to be secured. Under the program, people with qualifying student loans can enter what is known as the Income-Based Repayment plan. The plan enables enrollees to lower their monthly payments based on a debt-to-income ratio, which can be calculated at www.ibrinfo.org.

Sarbanes’ office provided an example of how the program works: A student graduates with $100,000 in qualifying debt at 6.8 percent interest and takes a full-time public service job starting at $40,000 with annual increases of 5 percent. He or she elects to enroll in the IBR plan, and in the first year, the monthly payments are $309, as opposed to $1,151 under the standard 10-year payment plan. As the student receives annual salary increases of 5 percent, the monthly IBR payments gradually rise until in year 10 they amount to $526 per month. Because the student remained in public service for 10 years and paid $49,132 under the IBR plan, his or her remaining principal and interest totaling $118,868 are forgiven.

“These new programs are powerful tools to recruit and retain the best and brightest into the public sector,” Berry said.

Sonia Sarkar, a Johns Hopkins alumna and program coordinator as an undergraduate of the Baltimore chapter of Project Health, a national nonprofit that works to break the link between poverty and poor health, was among several current and former students who spoke at the event announcing the loan forgiveness program.

“Increasingly, my peers are turning to careers in the nonprofit or government sector, and with growing momentum and support at the highest levels, the opportunities are boundless,” Sarkar said. “Initiatives such as the Sarbanes Public Service Loan Forgiveness Option are a tremendous boon in helping those of us with student loan debt pursue our passions and turn acts of service into lifelong endeavors.”