Giovanni Arrighi, the George Armstrong Kelly Professor of Sociology, died on June 18 at his home in Baltimore after a yearlong battle with cancer.

A renowned authority in the fields of world systems analysis and historical sociology, Arrighi, 71, came to Johns Hopkins in 1998 to anchor the Sociology Department’s comparative-historical group. Arrighi served as director of the Institute for Global Studies in Culture, Power and History from 1999 to 2002 and as department chair from 2003 to 2006. He remained active in the classroom through the spring semester, when he taught a graduate seminar on international development with his wife, Beverly Silver, also a professor in the Department of Sociology, while finishing several articles. 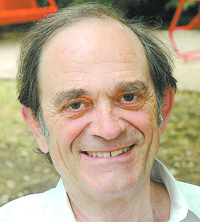 “The School of Arts and Sciences has been enriched immeasurably by Giovanni, as have those of us who knew him personally,” said Adam Falk, the James B. Knapp Dean of the Krieger School of Arts and Sciences, in a letter to students, faculty and staff on the Homewood campus. “I am struck by the enormous impact Giovanni had on his field and on Johns Hopkins over the years, bringing bold new perspective to social theory and historical sociology broadly.”

Arrighi was born in Milan in 1937 and received his doctorate in economics in 1960 from the Universita Bocconi, also in Milan. After graduating, he was appointed an unpaid teaching assistant, a position he described as “the first rung on the ladder in Italian universities.” To earn a living, he got a job with Unilever as a trainee manager. His academic career took off in the 1960s, when he left Italy to teach in Zimbabwe and Tanzania.

“Why I went [to Africa] was pretty straightforward,” Arrighi told the New Left Review during an interview for its March/April 2009 edition. “I learnt that British universities were actually paying people to teach and do research—unlike the position in Italy, where you had to serve for four or five years as an assistente volontario before there was any hope of a paid job. In the early 1960s the British were setting up universities throughout their former colonial empire, as colleges of British ones. The University College of Rhodesia and Nyasaland was a college of the University of London. I had put in for two positions, one in Rhodesia and one in Singapore. They called me for an interview in London and, because the UCRN was interested, they offered me the job as Lecturer in Economics. So I went.”

He went on to describe his time there as “a true intellectual rebirth” and the beginning of “my long march from neo-classical economics to comparative-historical sociology.”

Arrighi wrote landmark works on the political economy of Africa that set the terms of the scholarly debates in the field for decades. His most famous work was a recently completed trilogy on the origins and transformations of global capitalism that began in 1994 with a book that reinterpreted the evolution of capitalism, The Long Twentieth Century: Money, Power, and the Origins of Our Times. It was published in at least 10 languages, and Arrighi completed a second edition of it earlier this year. In 1999, he published Chaos and Governance in the Modern World System and two years ago, Adam Smith in Beijing: Lineages of the Twenty-First Century, comparing Western and East Asian economic development and exploring China’s rise to economic world power.
Before joining the faculty of Johns Hopkins, Arrighi was for 20 years a professor of sociology at State University of New York, Binghamton. He also had taught at the University of California, Los Angeles; Universita di Trento and Universita degli Studi della Calabria, both in Italy; and the University College of Dar es Salaam. He also spent a number of years as the principal investigator on various reseach projects funded by fellowships and grants.

Falk wrote that Arrighi and Silver had planned to attend a major international conference in his honor in late May in Madrid, but his condition deteriorated suddenly just days before the event. The weeklong conference, Dynamics of the Global Crisis, Anti-Systemic Movements and New Models of Hegemony, featured several of the field’s top scholars in an exploration of the insights of his work. He will be further honored at the American Sociological Association’s annual meeting in August with a session titled “From Rhodesia to Beijing: Reflections on the Scholarship of Giovanni Arrighi.”

In addition to his wife, he is survived by his son, Andrea.

Other tributes are being planned and details will be posted online at www.soc.jhu.edu/people/Arrighi/index.html as arrangements are finalized.