The university’s Black Faculty and Staff Association recently paid tribute to two of Johns Hopkins’ own legendary figures at its fifth annual celebration of Juneteenth, the unofficial holiday commemorating the ending of slavery in the United States.

For this year’s event, the organization chose to honor the contributions of African-Americans in science and laud the professional accomplishments of Ben Carson, the School of Medicine’s renowned brain surgeon, and James E. West, a Whiting School of Engineering faculty member who co-invented the microphone used in most telephones and many other electronic devices worldwide. 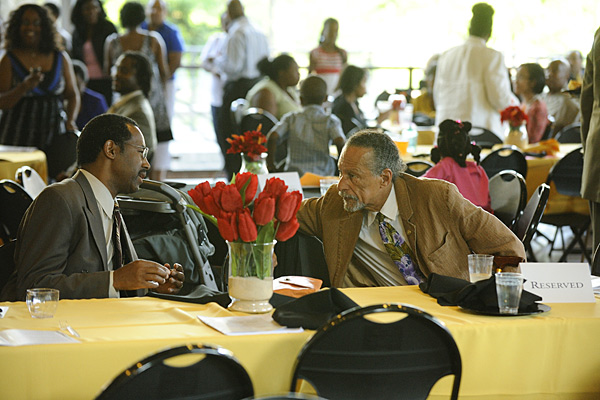 Also known as Freedom Day, Juneteenth celebrates June 19, 1865, the day Major Gen. Gordon Granger rode into Galveston, Texas, to inform its residents that the Civil War had ended. On that day, almost two and a half years after President Abraham Lincoln signed the Emancipation Proclamation, Granger read general order No. 3, a document that stated that all remaining slaves were to be set free. The celebrations that followed the reading began a tradition that continues to this day.

The 2009 JHU Juneteenth program was a dinner held in the Glass Pavilion on the Homewood campus. Emory Tolbert, a professor of history at Howard University, was the keynote speaker. The Ian Sims Jazz Trio provided musical entertainment.

In past years, the organization honored faculty and staff who have made significant contributions to neighboring communities. Deborah Savage, past president of the organization and current co-chair of its communication and membership committee, said that the BFSA wanted to move in a different direction and celebrate the accomplishments of African-Americans at Johns Hopkins who have made an impact far beyond the university.

“These two gentlemen are both renowned in their fields and larger-than-life figures. Had those who fought for us to be free not been successful, would there be a Dr. Carson or a scientist like Dr. West?” said Savage, IT manager of Student Technology Services. “This was an event to celebrate these two men and our freedom, and what it meant to millions.”

Carson has been director of Pediatric Neurosurgery at the Johns Hopkins Children’s Center since 1984, when he became the youngest ever appointed to this academic level at Johns Hopkins. Carson also co-directs the Craniofacial Center and is a professor of oncology, plastic surgery and pediatrics.
He is renowned for his innovative and groundbreaking neurosurgeries, which include separation of twins joined at the head and hemispherectomies, in which a portion of the brain is removed to stem intractable seizures in children. At the event, he received a silver plaque engraved with hands holding a brain.

Carson has authored more than 100 neurosurgical publications, along with three best-selling books, and has been awarded more than 40 honorary doctorates and dozens of national merit citations. Challenged to strive for excellence by his mother, Carson moved on from a childhood life of poverty in Detroit’s inner city to graduate from Yale University, 1973, and the University of Michigan School of Medicine, 1977. He subsequently trained in pediatric neurosurgery at Johns Hopkins before joining its faculty.

In June 2008, Carson received the nation’s highest civilian award, the Presidential Medal of Freedom, in a White House ceremony.

James West was born in 1931 in Farmville, Va., and developed an interest in electronics at an early age. His parents were disappointed that he wanted to study physics instead of medicine, but despite this warning, West pursued his original goal.

While attending Temple University, West began working during summer breaks as an intern at Bell Labs. He joined the company full time in 1957, and five years later he and his colleague Gerhard Sessler patented the electret microphone, in which thin sheets of polymer film, metal-coated on one side, are given a permanent charge to serve as the membrane and bias of a condenser microphone that helps convert sound to electrical signals with high fidelity. Almost 90 percent of the more than 2 billion microphones produced today are based on the principles developed by West and Sessler.

West spent more than four decades with Bell Labs, building upon this research and obtaining more than 200 U.S. and foreign patents. He also authored or contributed to more than 140 technical papers.

In 2002, West joined the Johns Hopkins faculty as a research professor in the Whiting School’s Department of Electrical and Computer Engineering. Since joining the faculty, West has continued to experiment with new communications materials and technologies and has conducted research aimed at reducing hospital noise. At a White House awards ceremony in 2006, he received the National Medal of Technology in recognition of his work. West also has been active in programs designed to encourage more minorities and women to enter the fields of science, technology and engineering.

At the BFSA event, West received a silver plaque engraved with the microphone he helped create.
The Johns Hopkins University Black Faculty and Staff Association was formed in 1995 by five faculty members who felt that the university’s response to a white staff member’s physical assault of a black colleague to be inadequate. The faculty felt that the university’s African-American population needed a unifying voice.

The BFSA—which has caucuses on the Homewood, East Baltimore and Applied Physics Laboratory campuses—acts as an advocate, information resource, provider of networking and professional development opportunities, and community outreach provider for JHU faculty and staff. The BFSA also serves as a resource to the university administration on a variety of topics and issues.

“Our continuing mission is to be a viable and valuable resource for people here,” Savage said.
For more information on the BFSA, go to bfsa.jhu.edu.