On his ninth “date” of the morning, Harry Khanna still hadn’t broken a sweat. He kept good eye contact, smiled frequently and had the person sitting across the table rapt on his every word.

Then the party horn blew.

“Change, please. Time’s up,” said a smiling man at the podium.

Khanna stood up and shook hands with his partner. He wondered if he had met his match but didn’t have much time to dwell on it. Date No. 10 awaited.

No need for another splash of cologne, however; this wasn’t your typical speed-dating session.
Khanna, a graduate student in the School of Medicine’s Department of Biomedical Engineering, had spent the past 10 minutes discussing his portable negative pressure ventilation system with Lawrence Agulnick, a venture capitalist and executive director of TBED21, a nonprofit science and technology education organization. 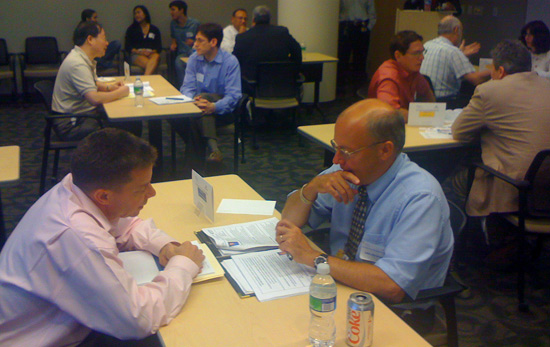 Each had something the other wanted. Khanna needed funds and expertise to bring his invention to market. Agulnick was on the lookout for that next great idea.

Khanna was one of 12 university scientific investigators on the hunt for financing at the inaugural Johns Hopkins Medicine Entrepreneurial Speed-Dating event, held June 25 in the Rangos Building of the new Science + Technology Park at Johns Hopkins.

The purpose of this half-day event was to connect Johns Hopkins inventor scientists with entrepreneurs experienced in starting businesses. Organizers felt that such an event could accelerate the formation of new life-science companies.

Here’s the setup: one room, 12 Johns Hopkins inventors and 13 entrepreneurs. In round one, the inventors meet with each entrepreneur for 10 minutes. The inventor pitches his or her technology or startup concept, and the entrepreneur pitches his or her background and ability to raise money. At the end of the round, the participants, who are given scorecards, submit their top five “matches,” the inventor or entrepreneur they would like to have another 20-minute session with for round two. Following the two rounds, all 25 participants mingle for an informal networking session.

How did it go for Khanna? He said it’s too early to tell, but he received some encouraging signs from a couple of the entrepreneurs.

“It was fun and definitely worthwhile, but I must admit I was a bit hoarse by the end,” Khanna said.

“This is a great way to meet with investors. It’s not always so easy to make these kinds of connections.”

Aditya Polsani, an industrial liaison associate with the Brain Science Institute and Biomedical Engineering Department, and one of the organizers, said that the event allowed university scientists to meet with multiple entrepreneurs in one setting, practice their business pitches and perhaps make that all-important first step in the creation of a new business venture.

“This was all about networking. I saw the gap that exists here, which is the lack of access to entrepreneurs and good management,” Polsani said. “Especially with the current economy, it’s very tough to get money. Venture capitalists are being extremely cautious. But a downtown in the economy is also an opportunity for new business creation because you have a lot of good ideas floating around for those willing to take a chance.”

Based on the overwhelmingly positive response to the speed-dating pilot, Polsani said that there would be more such events, to be held once or twice annually. The organizers plan to survey participants and follow up with them to see if anything comes of this kind of interaction.
Aris Melissaratos, senior adviser to the president for enterprise development at Johns Hopkins, said that events like Entrepreneurial Speed Dating help push the message that “Johns Hopkins is open for business,” which has become a motto in his office.

“We are trying to look at technology transfer more broadly and show the business community that we can become a medical version of Silicon Valley,” he said.

Melissaratos, former secretary of Maryland’s Department of Business and Economic Development, joined Johns Hopkins in February 2007 and in his role supervises the university’s Technology Transfer Office, the intellectual property administration center that serves Johns Hopkins researchers and inventors as a licensing, patent and technology commercialization office.
Melissaratos said that from day one he’s been trying to change the culture here and make Johns Hopkins more entrepreneurial.

He’s certainly made a dent. Johns Hopkins spawned a dozen start-up companies in 2008 and nine already this year. The average used to be four annually, with a previous high of six.
“Being commercial used to be sort of looked down upon here, but there’s nothing wrong with helping to create jobs and bring these inventions that can benefit mankind to market,” he said. “Financially speaking, the faculty benefits, as does the lab, department and the university. There’s a number of positives.”

Events like speed dating, Melissaratos said, could also create a pipeline of companies to populate the Science + Technology Park at Johns Hopkins.

The Rangos Building is the first of five state-of-the-art life sciences facilities planned for the project by the Forest City–New East Baltimore Partnership. Johns Hopkins is the anchor tenant and is leasing one-third of the space in the building, which is the new home for the School of Medicine’s Institute for Basic Biomedical Sciences. The remaining space will be leased to private biotech companies.

“Where we chose to host this event was definitely intentional,” he said. “We wanted to show people we have room to move in.”