"I'm sure I am doing what I am today because of that experience." 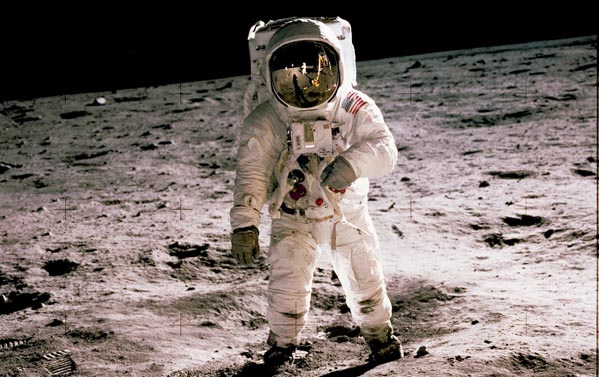 On July 20, 1969, Apollo 11 astronauts Neil Armstrong and Edwin “Buzz” Aldrin became the first humans to set foot on the moon. It was an event that captured the world’s imagination and inspired a generation of scientists and researchers.

In honor of the 40th anniversary of that historic event, we asked Johns Hopkins faculty members to reflect on their memories of Armstrong’s “One small step for man, one giant leap for mankind.” Following are some comments from astrophysicists from the Krieger School’s Henry A. Rowland Department of Physics and Astronomy and from the Applied Physics Laboratory, a historian from the Krieger School and an engineer from the Whiting School of Engineering.

“I was walking along Bloor Street in Toronto, as a beginning undergraduate, when I bought a newspaper and learned that Sputnik had been launched. [And] I was on a plane, my first visit to South America, and remember looking out the window at the moon and thinking that, for the first time, men were on their way to the moon-Apollo 8. 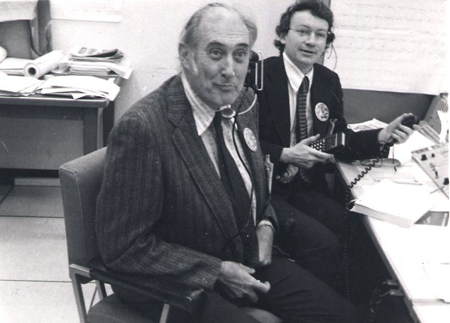 Prof. Dick Henry, right, during the Apollo 17 mission in Houston, 1972. Prof. Bill Fastie is at left.

“So, when I knew that men would walk on the moon for the first time, by gum, I decided to be there, and at my own expense bought a ticket to Florida, and I still in my mind’s eye see that beautiful plume of white against a cloudless sky as Neil Armstrong and Buzz Aldrin and Michael Collins headed for the moon. I was at Professor Paul Feldman’s house in Baltimore when we heard, live, on the radio, ‘The Eagle has landed.’  I was at a colleague’s apartment in Virginia when Armstrong said, ‘One small step.’

“My mother was born before the Wright Brothers flew, and she lived to see men walking on the moon. Glory, glory, glory! And, thanks to Professor Bill Fastie of The Johns Hopkins University, I got to personally become a principal investigator in the United States Lunar Program and to be a co-investigator, with Professor Feldman, in the Johns Hopkins ultraviolet experiment on Apollo 17. We even got to eat Chinese food in the famous control room as the three astronauts slept their final sleep in space on the way home!”

William Blair, Henry A. Rowland Department of Physics and Astronomy: 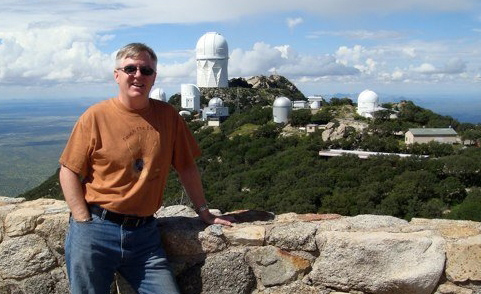 “I am probably the classic case of a kid who grew up during the Mercury, Gemini and Apollo era. I was between my sophomore and junior years of high school during the summer of Apollo 11, and not only was I entranced by the moon landing and all things NASA, but I was inspired into pursuing a technical career. After majoring in physics and math, I obtained a PhD in astronomy and came to Johns Hopkins in 1984, first to work on the Hopkins Ultraviolet Telescope project [a space shuttle-borne telescope that flew in 1990 and 1995] and then for the last 12 years to help operate the Far Ultraviolet Spectroscopic Explorer mission.

“It is a career path that I could not have imagined that night 40 years ago as I watched that ‘one small step’ on a grainy black-and-white TV set in my parents’ living room. But I’m sure I am doing what I am today because of that experience.” 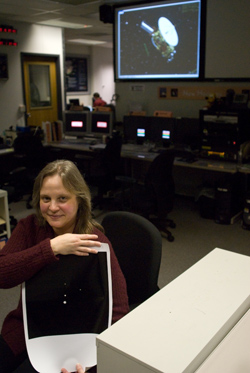 Alice Bowman, Johns Hopkins Applied Physics Laboratory:
“It’s amazing how far space exploration and our knowledge of the universe have come since man walked on the moon. Most of this advancement grew from the excitement over space travel that Apollo generated. I was a grade-schooler during the Apollo program, and it was Apollo and its astronauts that influenced me to choose a career in space exploration. These guys were-and still are-my heroes!

“I recently visited the old test site of the rockets used to launch Apollo. Despite the signs of more than 40 years of age, it was awe-inspiring to stand among these test stands and imagine the excitement and furor of those days. Many chose a career in space because of Apollo, and that has positioned the United States as a leader in manned and robotic space exploration. We owe a lot to the dedication of the men and women who made the Apollo program such a success and bright beacon for us all to follow.”

John Sommerer, Johns Hopkins Applied Physics Laboratory:
“My thoughts about the Apollo anniversary both center on my reaction at the time to the famous plaque attached to Eagle’s front landing strut. The plaque is inscribed: ‘Here men from the planet Earth first set foot on the moon. July 1969 A.D. We came in peace for all mankind.’

“First, I realized even as those words were read that probably never again would people make such a big leap, in relative terms. If nonhuman, space-faring life forms ever found that plaque-and understood it-they’d date humanity’s joining the universe’s sentient species from that moment. It would be the single most important thing that people had ever done.

“Second, I felt uncomfortable even then with the language: ‘men’ and ‘mankind.’ It was true that Armstrong and Aldrin were both men, but it smacked of a lack of imagination that was ironic given the audacity of Apollo. How much better it would have been if we had written ‘people’ and ‘humankind’ respectively. The first word would have included half the world’s people; the second would have kept squarely in view one of the main reasons for the effort: to find out whether or not we are alone in the universe.”

Jonathan Bagger, Henry A. Rowland Department of Physics and Astronomy:
“I watched the moon landing on a small back-and-white TV in a mess hall at the Boy Scout Jamboree in Coeur D’Alene, Idaho. From that trip, I mostly remember cutting off the tip of my finger chopping onions and visiting Haight Ashbury in San Francisco afterwards in my Boy Scout uniform. The locals must have thought they were tripping to see us all in our green knee socks.” 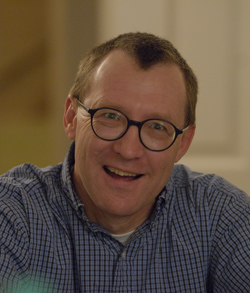 Stuart W. Leslie, Department of History of Science and Technology:
“Growing up in the Jetson household wasn’t always easy. My father had been working with the manned space flight program since its beginnings-not as a rocket scientist but as a food chemist. Even astronauts would have to eat, he reminded us. So I may have been one of the only teenagers watching the first moon walk who wondered what the astronauts had eaten for breakfast, whether they liked Tang as much as I did and what they thought of coffee gum.

“Some of my earliest memories were of visiting my father’s laboratory at the Army Quartermaster Institute in Chicago, being given a few feet of lab space of my own, along with a few words of encouragement about how the future would be in space and I’d better be ready.

“Not that I was a big fan of many of the ‘space foods’ my father brought home for us to sample. His job was figuring out how to make space food edible as well as nutritious. He talked enthusiastically about irradiated meats and vegetables with an indefinite shelf life, even at room temperature-tuna fish, green beans, pork chops. None of my favorites but lots more appetizing than the irradiated algae which he assured us would be just the ticket for future trips to Mars.

“We had an excellent view of the moon in Chicago that night in July 1969. Something special was happening. I knew that for sure. Americans were on the way to other planets, and beyond, and when they got there, my father would make sure they would have something better to eat than what he’d gotten in the Navy back in WWII.

“After each NASA launch, starting with Alan Shepard’s ill-fated first flight-Shepard wouldn’t have had so many problems if he’d eaten space food instead of the big breakfast-my father somehow rounded up footage of the flight and gave lectures for my grade school and middle school classes. I felt like a celebrity.

“My father and I built model rockets, with some success, but my science fair projects in high school focused on food flavoring. No real breakthroughs, though I did figure out the secret to the flavor of cabbage and bologna. I don’t think we ever got a chance to taste space ice cream, though I knew it went along with Apollo 7 in 1968. It wasn’t a big hit with the astronauts, and having sampled it since at many science centers, I understand why. I guess you can’t win them all.

“Still, I was proud of my father that night for his contributions to something so inspiring. For a moment, we touched some magic together. There’s a faded newspaper article about my father under the title ‘Food chemist tackles needs of this Earth, outer space’ with a detailed description of his experiments with ‘out-of-this-world food.’

“I didn’t end up becoming one of the ‘rocket boys,’ as I’m sure my father secretly hoped, though I chose a career where I could teach young people who’d never seen a man walk on the moon for themselves what an accomplishment that had been.” 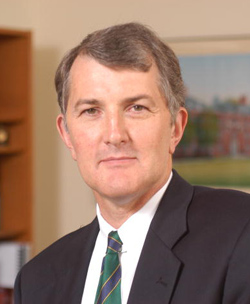 Andrew Douglas, Whiting School of Engineering:
“I grew up in apartheid South Africa. Although South Africa was, and remains, one of Africa’s economically and technically most advanced countries, it was among the last countries in Africa to introduce television. Although at that time the government of Hendrik Verwoerd asserted that the delay in introducing television was driven by economics, we all knew that the primary reason for preventing the people from seeing TV was to control the population and to maintain apartheid. Even though the state-controlled South African Broadcasting Corp. had a monopoly on broadcasting, the Afrikaners in power knew that with so much programming already available in English and the world around changing faster than they wanted, great pressures would build up inside the country.

“But it proved to be a turning point as pressure mounted on the government to bring TV to South Africa. Nationwide television was only available in 1976. By that time we had missed TV broadcasts of the assassinations of John and Robert Kennedy and Martin Luther King. We missed the television footage of the entire Vietnam War.  While the rest of the world saw Germany beat Holland 2-1 in the 1974 World Cup, we read about rugby.

“As I think back on how I saw that first step onto the moon, I am reminded that technology has great implications for democracy and the rights of individuals. In Dismantling Utopia, Scott Shane argues that the inability of the Soviet Empire to keep up with technology led to its downfall. It will be interesting to see how China faces technology and technological changes as it both modernizes and adjusts its political system. Much will depend on technical advances. South Africa is now a democracy, and perhaps The Bill Cosby Show, broadcast there on television, helped that country to begin to heal the deep wounds of apartheid.”