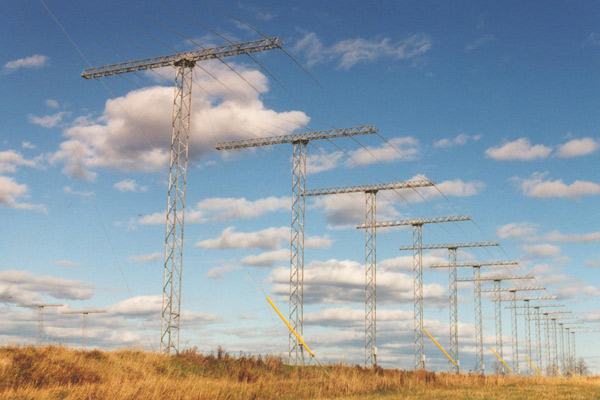 The Kapuskasing SuperDARN radar, in Canada, is one of three radars collaboratively managed by APL and Virginia Tech.

The Super Dual Auroral Radar Network, or SuperDARN, expansion project, scheduled for completion in 2012, will add an array of midlatitude radars to capture data on drifting plasmas in our ionosphere that radars at high-latitude locations miss when strong solar storms stretch to lower latitudes.

The SuperDARN network currently consists of 21 radar sites in eight countries and Antarctica, with 14 northern sites stretching from Finland, through Canada, to Japan that monitor the ionosphere above the North Pole, and seven southern sites arrayed around and in Antarctica that observe events above the South Pole. Four new radar pairs will be built—one pair per year—in Kansas, Oregon, the Aleutian Islands and the Azores.

“With expanded radar coverage stretching from Eastern Asia to Europe and from Kansas to the magnetic north pole, we will better understand the near-Earth space environment, which will help us better understand and predict the effects of solar storms on space- and ground-based systems,” said Elsayed Talaat, APL’s SuperDARN principal investigator and science lead. The SuperDARN project began at APL, and the midlatitude expansion is a collaborative effort between Virginia Tech, the University of Alaska Fairbanks, Dartmouth College and APL.

“We’re partnering with the other institutions on the design and construction of the new radars, and APL is providing and installing all related software,” Talaat said. APL built and manages the Wallops Island radar in Virginia, the first midlatitude radar constructed, and collaborates with Virginia Tech on three other existing radars located in Goose Bay and Kapuskasing in Canada, and in Blackstone, Va.

APL is the central data collection and distribution site, and maintains the software for radar operation and data analyses, as well as the project’s Web site, where several products, including real-time radar displays and convection maps, and time-series and field-of-view measurements, are archived and made available to the atmospheric science communities. The software and Web site are maintained at APL by Robin Barnes, the SuperDARN software engineer since 1997.

The radars at each SuperDARN site are virtually identical, with some minor differences in antenna design and for accommodating the physical conditions at the site. Each radar has two arrays of 50-foot antenna towers; the primary array consists of 16 towers, and the secondary, interferometer array consists of four towers. The antennas function as a single radar with beams scanning a 53-degree sector. They operate 24 hours a day, autonomously transmitting five gigabytes of data daily back to APL through computer and electronic equipment housed in an accompanying building at each site. APL then routes the data to the other principal investigator institutions.

SuperDARN data is being used in conjunction with data from NASA’s TIMED (Thermosphere, Ionosphere, Mesosphere Energetics and Dynamics) spacecraft, built and operated by APL, to study heating in the thermosphere and for auroral studies.

The SuperDARN project is funded by grants from the National Science Foundation.

For more information, go to superdarn.jhuapl.edu.