Historian moves among the movers and shakers of oldtime Baltimore 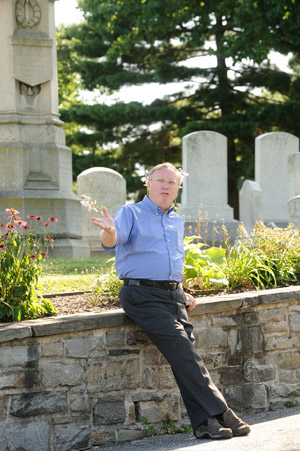 Wayne Schaumburg shares his love of Baltimore history in tours at Green Mount Cemetery. Photo by Will Kirk, HIPS.

Wayne Schaumburg brakes for historic cemeteries. Well, the bumper sticker on his car says he does, and after spending a few moments with the lifetime Baltimore resident, you realize it’s probably not just a one-liner.

Schaumburg loves history, particularly that of 19th-century America and of his hometown. He taught history and social studies in the Baltimore City Public School System for 39 years up until his retirement in 2007.

No small wonder that he gravitated to the graveyard called Green Mount Cemetery, the final resting place for the Who’s Who of Charm City. The list of those buried there includes Johns Hopkins, Enoch Pratt, William and Henry Walters, Sidney Lanier, William Rinehart and John Wilkes Booth, to name just a few famous Marylanders. Known as “Baltimore’s Valhalla,” the cemetery also features the gravesites of numerous political leaders and nearly 20 Civil War commanders.

Schaumburg began giving tours of Green Mount in 1985 as a volunteer with the Baltimore City Life Museums. He backed into the job, he said.

“Another person at the museum, who was a decorative arts expert, planned to give a tour of the cemetery. He said, ‘I’m just working from notes, why don’t you come along and chime in when you want? We’ll play off each other,’” Schaumburg said, recalling the conversation. “After the tour, he pulled me aside and said, ‘You really know a lot about this place. You should be the one giving the tours.’ I’ve been doing them ever since.”

In 1997, when the Baltimore City Life Museums closed, Schaumburg struck out on his own and began offering two-hour extensive tours of the cemetery on Saturdays in May and October.

When he’s not hanging around old cemeteries, Schaumburg, who received his MLA degree from Johns Hopkins in 1979, teaches noncredit courses at the Johns Hopkins Center for Liberal Arts, in both its Odyssey and Osher Lifelong Learning Institute (formerly the Evergreen Society) programs. He also teaches part time for Towson University and Roland Park Country School, and lectures and gives tours of Baltimore to various civic, senior and college groups.

This fall, Schaumburg will teach an Osher course centered on the cemetery called Where Baltimore’s Best Were Laid to Rest: Green Mount Cemetery and the “Movers and Shakers” of 19th-Century Baltimore. Through six lectures and a study tour of Green Mount, participants will explore events that contributed to Baltimore’s rise as a major urban center.

Green Mount Cemetery was one of the earliest rural or garden cemeteries in the country. Samuel Walker, a Baltimore tobacco merchant, led the campaign to establish it after visiting Mount Auburn Cemetery in Cambridge, Mass.

Schaumburg said that Walker marveled at the beauty of Mount Auburn and wanted a similar place in Baltimore where people could pay their respects to the dead and also enjoy a nice day out.

“He wanted to make a graveyard a pleasant place, to make it parklike. He thought people would want to come here and stroll the grounds and even pack a picnic lunch,” he said. “In large part, it was about getting people to be less fearful of death by making a cemetery not so gloomy.”

The site chosen for the cemetery was the country estate of the late merchant Robert Oliver. Oliver’s property, known as “Green Mount,” was a hilly location at the then northern boundary of the city. A group led by Walker purchased 65 acres of the estate, at the price of $65,000, from the heirs of Robert Oliver, and Green Mount Cemetery was officially established on March 15, 1838.

Benjamin Latrobe Jr., a civil engineer with the Baltimore & Ohio Railroad, laid out the early design of the cemetery, now known for its shady avenues, beautiful gardens and Victorian-age monuments and mausoleums.

Schaumburg said the concept immediately took off and spawned three similar cemeteries in Baltimore: Loudon Park, Baltimore and Mount Olivet. “Cemeteries like Green Mount, in fact, became immensely popular and were duplicated across the country,” he said.

Green Mount burial was open to the public, or anyone who could afford a $100 plot, quite a sum in those days.

The first person laid to rest was 2-year-old Olivia Cushing Whitridge, daughter of a prominent doctor. The cemetery now includes more than 65,000 individuals. “Just about anybody who was anybody in Baltimore is buried here,” he said.

Notably, the cemetery features the graves of Johns Hopkins, the Walters family and Enoch Pratt: three of the city’s “big four” 19th-century philanthropists, Schaumburg said. “It’s unfortunate that Peabody is not buried here to complete the set,” Schaumburg said with a grin. Peabody was buried, perhaps fittingly, in Peabody, Mass.

The gravesite of Johns Hopkins is notable, Schaumburg said, for its plainness: a large marble slab floating in a sea of much more massive, elaborate and ostentatious grave markers.

“People are always surprised when they get to this part of the tour. They go, “Ooh, Hopkins’ site is going to be immense,’ and then they see this slab,” Schaumburg said. “But you have to consider that Hopkins was a Quaker, and simplicity was a virtue.”

Hopkins died on Christmas Eve 1873, and each year devotees gather at his gravesite to remember the benefactor of the university and hospital that bear his name. In what has become a tradition, many mark the occasion by leaving a coin on the grave, an act thought to bring good luck in the new year.

Nearby the Hopkins family plot sit the Garretts—John Work Garrett, president of the B&O Railroad and longtime university trustee, and his descendents: Robert, T. Harrison and Mary Elizabeth Garrett, the famous women’s-education and suffrage pioneer who led the effort to establish the Johns Hopkins School of Medicine.

A stone’s throw from the Garrett site is one of Schaumburg’s favorite tombstone names, Honolulu McKeldin, wife of former Maryland Gov. Theodore Roosevelt McKeldin. As Schaumburg tells it, Honolulu’s mother, Maude Florence, got inspiration for the unusual forename from a delivery nurse who had just returned from a trip to Hawaii.

Some of Schaumburg’s favorite graves? He has many. To name a few, he appreciates the intricate marble carvings on that of A.S Abell, founder of The Baltimore Sun. He also is fond of the gravesite of William and Henry Walters, the famous art collectors whose collection began the Walters Art Museum. The Walters’ site prominently features a William Henry Rinehart–crafted bronze statue of a Grecian woman dropping rose petals onto the grave.

Another of Schaumburg’s favorite tour stops is the burial spot of Elijah Jefferson Bond, inventor of the Quija board. Bond had long been buried in Green Mount in an unmarked grave. In 2007, an aficionado of the “talking board”—supposedly used to communicate with spirits— wanted to rectify that and received permission to install a gravestone for Bond that features an engraved replica of a Quija board on its backside. “I just love that one,” Schaumburg said. “A fitting marker, especially in a cemetery.”

Schaumburg’s Green Mount tours, capped at 40 people, begin at 9:30 a.m. and cost $15 per person. This year, a tour will fall on Halloween, and Schaumburg expects a lively and full crowd for that one.

“I’m still amazed at how many people want to spend a Saturday morning walking among the dead,” he said.

To contact Schaumburg about tours, e-mail wschaumburg@earthlink.net. For more on his Osher class at Johns Hopkins, go to http://evergreen.jhu.edu.