Pamela Paulk, vice president for human resources at The Johns Hopkins Hospital and Johns Hopkins Health System, took her work to the next level June 22 when she joined an elite group of humanitarians and donated a kidney to a needy recipient. Paulk was part of the four-state, 16-patient kidney exchange orchestrated by Robert Montgomery, chief of the Transplant Division at Johns Hopkins. It was the largest such multiple donor-recipient exchange to date. These exchanges—so-called domino kidney paired donation—enable multiple donors and recipients to interchange kidneys so that each recipient can receive the kidney that best matches his or her blood and tissue type, thus helping to ensure that the kidney will have the best chance of long-term survival. 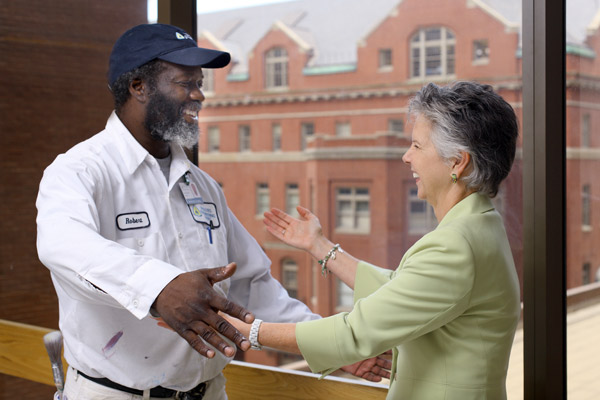 Recipient Robert Imes and donor Pamela Paulk greet each other a few days before their surgeries in the world's first 16-patient, multicenter 'domino donor' kidney transplant.

The ultimate beneficiary of Paulk’s generosity is Robert Imes, who received someone else’s kidney because of her donation. Imes is a painter at The Johns Hopkins Hospital whom Paulk got to know nine years ago during contract negotiations with Imes’ local union.

“We have been good friends for a long time,” Imes said.

Although Imes’ kidney had failed three years ago, Paulk learned about it only recently when he had to take 10 months off from work. She describes Imes as a soft-spoken, kind and polite man, not the type who would complain a lot about his problems.

“When he returned to work,” Paulk said, “I asked him if there was anything I could do. He said, half joking, that if only I could give him a kidney. To his surprise, I told him I would. I don’t think he believed me.”

Imes says he was touched by her kindness. “Although, to be honest, I kind of shrugged it off. It is one thing to say you want to give a kidney and another to go through all the work it takes to actually donate one,” he said.

Paulk says that she first thought of donating 10 years ago, after meeting Montgomery at a party. They talked about the need for organs, and that most people carried around a spare kidney that could save someone’s life. Montgomery even invited Paulk to witness a surgery, which she did.

“There is a magical moment in the procedure when you can actually see the kidney begin to function. It had a powerful effect on me,” Paulk said.

She was so moved by this experience that she became a supporter of kidney donation and began speaking at small events at Johns Hopkins to raise awareness. The incongruity of a national kidney shortage when, theoretically, there is ample supply compelled her to want to donate someday. She says she was just waiting for the right time.

“I felt like, if you believe in this, you have to be willing to do it yourself,” she said.

Paulk says there was no defining “aha” moment when she decided she was ready. “I just reached a point where I thought that I should do it while my kidneys are healthy,” she said. “And then I met Robert, and I guess it was just time.”

Shortly after Paulk learned of Imes’ desperate need, she went to the Johns Hopkins Comprehensive Transplant Center and said that she wanted to donate her kidney to Imes. Testing revealed that she and Imes did not have the same blood type, and he could not receive her kidney. When she called Montgomery and asked if there was any way she could help Imes, he told her about domino kidney paired donation. When he explained that this procedure not only guaranteed Imes the best kidney but would also benefit a lot more recipients, she did not hesitate to sign up.

“As strange as it might seem, my only real fear was the anesthesia,” Paulk said. “My mother was in nursing training back when anesthesia was very risky, and she always warned me against anesthesia.”

Paulk says what helped her make the final commitment was a conversation she had with her friend John Ulatowski, chairman of the Department of Anesthesiology.

“When I told him my fears, he laughed and said, ‘You’re about to have major surgery, and you’re concerned about the anesthesia? Get over it.’”

It might not have been the most comforting of responses, but Paulk says it did the trick.

Paulk says she is happy with her decision and plans to continue to be a vocal advocate for kidney donation. “I am already telling everyone I see, Do you know you have two kidneys and only need one?”

To further her efforts in getting others involved, Paulk created a blog chronicling her experience, called Pamela Donates.