Approximately 250 young Baltimoreans are in their fourth week of employment on the Homewood and East Baltimore campuses through Johns Hopkins Institutions’ partnership with the city’s YouthWorks Summer Jobs Campaign.

The six-week program, administered by Baltimore’s Office of Employment Development, is designed to get local youth, ages 14 to 21, working and earning money during the summer, exposing them to a variety of public- and private-sector work settings and helping them prepare for future careers.

The local youth—150 of them at The Johns Hopkins Hospital, about 20 at Bayview Medical Center and 100 at Homewood and other university sites—are working in a variety of departments. Their positions range from administrative and clerical work to assisting faculty and staff with their clinical responsibilities, research studies and technical support duties. The students work from 9 a.m. to 3 p.m. Monday through Thursday and 9 a.m. to noon on Fridays; on Friday afternoons, all 250 gather in Shriver Hall at Homewood or Turner Hall in East Baltimore to hear guest speakers talk about such topics as how to achieve business success and professionalism and how to be good money managers.

At a kick-off event for the YouthWorks program earlier this year, JHU President Ronald J. Daniels called the university’s involvement “a terrific illustration of how the city and Baltimore’s private employers can work together to address an urgent public need.” Daniels said he was proud that Johns Hopkins answered the call to expand the summer jobs program in the midst of a very serious national recession.

“A summer job is something more than a teenager’s rite of passage,” Daniels said. “It represents that important first entree into the world of work, the promise of career and the opportunity to discover one’s passion. It’s a ticket to new places, new challenges and personal growth.”

“What we’re trying to do is to expose young people to the world of work and the health-care industry,” Kerr-Donovan said. “We hope they’ll be inspired to pursue post-secondary education in health care or pursue a career in this industry that has upward mobility and growth.” 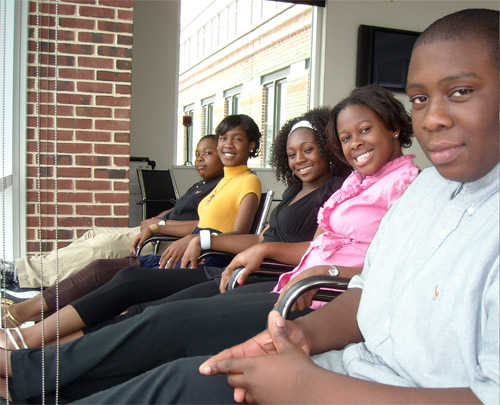 In the Office of Government, Community and Public Affairs in Fells Point, five teens have been performing a variety of tasks, from stuffing envelopes to assisting with video shoots. They’ve also been learning firsthand about GCPA’s mission of communicating the messages of Johns Hopkins by blogging about their experiences at the divisions they’ve visited and the people they’ve met along the way.

“It’s not what I thought I’d be doing,” said Chanel Pierce, a senior at the Institute of Business and Entrepreneurship High School. “I thought I’d be doing a lot of filing, not working on big projects and taking field trips. It’s the most thinking I’ve ever done during the summer, but I like it.”

Pierce and her co-workers also went behind the scenes to help out at a press conference organized by GCPA and hosted at the School of Education, featuring President Daniels and U.S. Rep. John Sarbanes of Maryland. The event was held to promote a new federal loan program that allows individuals who choose to work in public service for 10 years to reduce or eliminate their qualifying loan and debt.

“My favorite part was the press conference—I’d never been a part of anything like that before,” said Samone Ijoma, a junior at Roland Park Country School. “It was really interesting to see all the news people there with their cameras.”

According to Baltimore City officials, the goal this year was to be able to offer jobs to 7,000 young people, an increase of more than 20 percent from last year. Everyone who applied for a summer job and met the criteria was offered one, they said.

The students weren’t the only ones to benefit from the program, according to Kerr-Donovan. “With the state challenged by a high unemployment rate and most Hopkins departments dealing with a hiring freeze, the six-week program presents a win-win situation for the institution, community, young people and their families,” she said.

A closing ceremony for YouthWorks at Johns Hopkins is planned from 1 to 3:30 p.m. on Friday, July 31, in Turner Auditorium.