The goal: enhance healing and reduce the likelihood of re-injury

Johns Hopkins biomedical engineering students have demonstrated a practical way to embed a patient’s own adult stem cells in the surgical thread that doctors use to repair serious orthopedic injuries such as ruptured tendons. The goal, the students said, is to enhance healing and reduce the likelihood of re-injury without changing the surgical procedure itself.

The project team—10 undergraduates sponsored by Bioactive Surgical, a Maryland medical technology company—won first place in this year’s Design Day competition conducted by the university’s Department of Biomedical Engineering. In collaboration with orthopedic physicians, the students have begun testing the stem cell–bearing sutures in an animal model, paving the way for possible human trials within about five years. 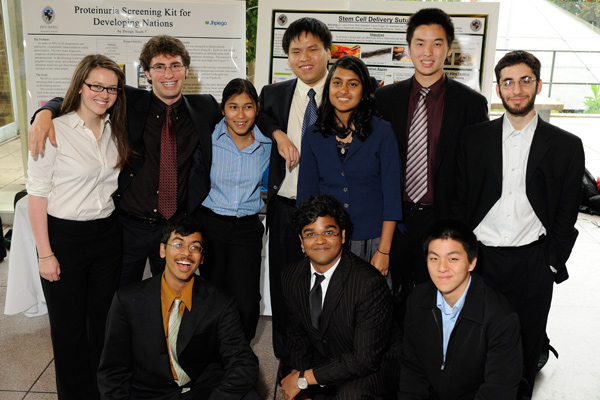 The students say they believe that this technology has great promise for the treatment of debilitating tendon, ligament and muscle injuries, often sports-related, that affect thousands of young and middle-aged adults annually. “Using sutures that carry stem cells to the injury site would not change the way surgeons repair the injury,” said Matt Rubashkin, the student team leader, “but we believe the stem cells will significantly speed up and improve the healing process. And because the stem cells will come from the patient, there should be no rejection problems.”

The corporate sponsor, Bioactive Surgical, developed the patent-pending concept for a new way to embed stem cells in sutures during the surgical process. The company then enlisted the student team to assemble and test a prototype to demonstrate that the concept was sound. The undergraduates performed this work during the required yearlong Design Team course.

The team located a machine that could weave surgical thread in a way that would ensure the most effective delivery and long-term survival of the stem cells. The students conducted some aspects of the animal testing, although orthopedic physicians performed the surgical procedures. The students also prepared grant applications, seeking funding for additional testing of the technology, in collaboration with Bioactive Surgical.

As envisioned by the company and the students, a doctor would withdraw bone marrow containing stem cells from a patient’s hip while the patient was under anesthesia. The stem cells would then be embedded in the novel suture through a quick and easily performed proprietary process. The surgeon would then stitch together the ruptured Achilles tendon or other injury in the conventional manner but using the sutures embedded with stem cells.

At the site of the injury, the stem cells are expected to reduce inflammation and release growth factor proteins that speed up the healing, enhancing the prospects for a full recovery and reducing the likelihood of re-injury. The team’s preliminary experiments in an animal model have yielded promising results, indicating that the stem cells attached to the sutures can survive the surgical process and retain the ability to turn into replacement tissue, such as tendon or cartilage.

If similar results occur in future human testing, many patients may benefit. Researching the business opportunity, the students found that about 46,000 people in the United States undergo Achilles tendon repair surgery every year, with a mean age between 30 and 50 years old. The operation and subsequent therapy costs are about $40,000 per case, the students said. “After surgery, the recovery process can take up to a year. In about 20 percent of the cases, the surgery fails and another operation is needed,” said Rubashkin, who will begin his senior year at Johns Hopkins in the fall. “Anything we can do to speed up the healing and lower the failure rate and the additional medical costs could make a big difference.”

Lew Schon, a leading Baltimore foot and ankle surgeon and one of the inventors of the technology, said, “These students have demonstrated an amazing amount of initiative and leadership in all aspects of this project, including actually producing the suture and designing the ensuing mechanical, cell-based and animal trials.” Schon, who also is an assistant professor of orthopedic surgery in the Johns Hopkins School of Medicine, added that “the students exceeded all expectations. They have probably cut at least a year off of the development time of this technology, and they are definitely advancing the science in this emerging area.”

The biomedical engineering students say that some of their grant applications are aimed at studying the use of stem cell–bearing sutures for other orthopedic applications, such as rotator cuff repairs. Future uses in cardiology and obstetrics are also being considered.

A provisional patent has been filed covering potential improvements to the stem cell–bearing suture technology by the members of the Johns Hopkins student design team.