Crews recently completed the majority of the restoration work on the clock tower. Next: a new glass atrium. 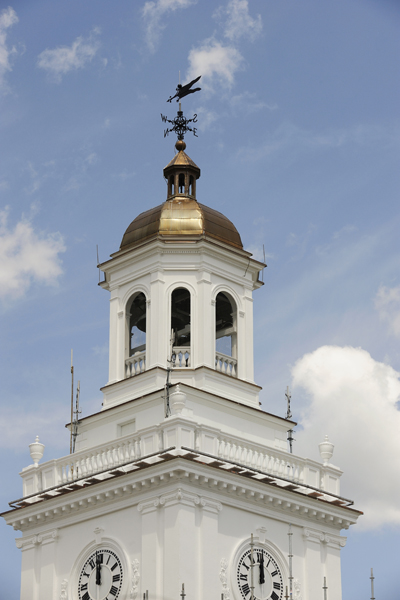 (click for larger) The tower restoration complete, work crews are now fully engaged with the construction of Gilman Hall’s new atrium. A 60-by-60-foot glass skylight, to be installed beginning this fall, will cap the central space.

The renovation of Homewood’s Gilman Hall continues. One prominent piece of the building has a bright new look, and work has kicked into high gear on the new three-story glass-topped central atrium.

Crews recently completed the majority of the restoration work on the clock tower, repainting the entire structure after scraping it bare of old coats, replacing the cupola’s copper roof and installing a newly made urn to replace one that went missing at some point over the years. The building’s famous weather vane and lantern were refurbished and repainted, and, to protect the tower, new lightning rods were installed.

What time is it? It will now be easier to tell as the four clocks’ hands and faces were also restored and repainted. The acrylic faces were replaced with frosted glass ones, resembling more closely what is thought to have been the original material.

In the center of the building, scaffolding has been erected along the atrium light wells to create a temporary work platform, or “dance floor,” that will allow crews to work on the atrium’s exterior brick and demolish the nonhistorical windows. Eight large fixed windows on each floor will replace the ones removed, and the historic brick of the east wall will be cleaned and re-pointed. The north, west, and south atrium walls will feature a terra cotta cladding system.

The scaffolding and suspended temporary floor will also permit crews to remove the existing dormers along the perimeter of the atrium and perform selective roof demolition so that the 60-by-60-foot glass skylight can be installed beginning this fall.

The skylight is scheduled for completion by early 2010. It is being designed, fabricated and installed by Novum Structures, a world leader in glazed structures whose projects include the William Wrigley Jr. Co. Global Convention Center in Chicago and the massive MGM City Center project in Las Vegas.

The skylight will feature a steel-grid frame with fully glazed square glass panels. A precisely engineered combination of compression members and tension cables, the structure, though less than 10 inches thick, will span the entire courtyard without intermediate support.

Renovation of the university’s oldest academic building is scheduled for completion in summer 2010.

For more on the Gilman Hall renovation, click here