Test could alert people who are at risk of developing the disease and also could tell doctors how well a particular cancer treatment is working.

Using tiny crystals called quantum dots, Johns Hopkins researchers have developed a highly sensitive test to look for DNA attachments that often are early warning signs of cancer. This test, which detects both the presence and the quantity of certain DNA changes, could alert people who are at risk of developing the disease and also could tell doctors how well a particular cancer treatment is working.

The new test was reported in a paper called “MS-qFRET: A Quantum Dot–Based Method for Analysis of DNA Methylation,” published this month in the journal Genome Research. The work also was presented at a conference of the American Association of Cancer Research.

“If it leads to early detection of cancer, this test could have huge clinical implications,” said Jeff Tza-Huei Wang, an associate professor of mechanical engineering whose lab team played a leading role in developing the technique. “Doctors usually have the greatest success in fighting cancer if they can treat it in its early stage.”

Wang and his students developed the test with colleagues at the Johns Hopkins Kimmel Cancer Center. Stephen B. Baylin, deputy director of the center and a co-author of the Genome Research study, said that the test represents “a very promising platform” to help doctors detect cancer at an early stage and to predict which patients are most likely to benefit from a particular therapy. 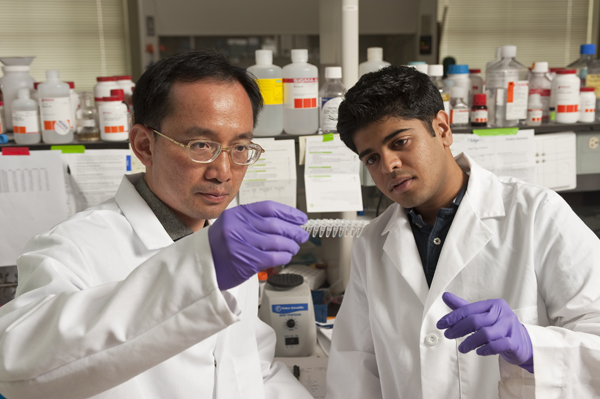 The recent study, which included the detection of DNA markers in sputum from lung cancer patients, was designed to show that the technology was sound. Compared to current methods, the test appeared to be more sensitive and delivered results more quickly, the researchers said. “The technique looks terrific, but it still needs to be tested in many real-world scenarios,” Baylin said. “Some of these studies are already under way here. If we continue to see exciting progress, this testing method could easily be in wide use within the next five years.”

The target of this test is a biochemical change called DNA methylation, which occurs when a chemical group called methyl attaches itself to cytosine, one of the four nucleotides or base-building blocks of DNA. When methylation occurs at critical gene locations, it can halt the release of proteins that suppress tumors. When this occurs, it is easier for cancer cells to form and multiply. As a result, a person whose DNA has this abnormal gene DNA methylation may have a higher risk of developing cancer. Furthermore, these methylation changes appear to be an early event that precedes the appearance of genetic mutations, another precursor to cancer.

To detect this DNA methylation, the Johns Hopkins team found a way to single out the troublesome DNA strands that have a methyl group attached to them. Through a chemical process called bisulfite conversion, all segments that lack a methyl group are transformed into another nucleotide.

Then, another lab process is used to make additional copies of the remaining target DNA strands that are linked to cancer. During this process, two special-purpose molecules are attached to opposite ends of each DNA strand. One of these molecules is a protein called biotin; the other is a fluorescent dye. These partner molecules are attached to help researchers detect and count the DNA strands that are associated with cancer.

To do this, these customized DNA strands are mixed with quantum dots, which are crystals of semiconductor material whose sizes are in the range of only a few nanometers across. (A nanometer is one-billionth of a meter.) These dots are usually employed in electronic circuitry, but they have recently proved to be helpful in biological applications as well. Quantum dots are useful because they possess an important property: They easily transfer energy. When light shines on a quantum dot, the dot quickly passes this energy along to a nearby molecule, which can use the energy to emit a fluorescent glow. This behavior makes the cancer-related DNA strands light up and identify themselves.

In the Johns Hopkins cancer test, the quantum dots have been coated with a chemical that is attracted to biotin, one of the two molecules that were attached to the DNA strands. As a result, up to 60 of the targeted DNA strands can stick themselves to a single quantum dot, like arms extending from an octopus. Then, an ultraviolet light or a blue laser is aimed at the sample. The quantum dots grab this energy and immediately transfer it to the fluorescent dyes that were attached earlier to the targeted DNA strands. These dye molecules use the energy to light up.

These signals, also called fluorescence, can be detected by a machine called a spectrophotometer. By analyzing these signals, the researchers can discover not only whether the sample contains the cancer-linked DNA but how much of the DNA methylation is present. Larger amounts can be associated with a higher cancer risk.

“This kind of information could allow a patient with positive methylation to undergo more-frequent cancer screening tests. This method could replace the traditionally more invasive ways for obtaining patient samples with a simple blood test,” said Vasudev J. Bailey, a biomedical engineering doctoral student who was one of the two lead authors on the Genome Research paper. “It’s also important because these test results could possibly help a doctor determine whether a particular cancer treatment is working. It could pave the way for personalized chemotherapy.”

In addition, because different types of cancer exhibit distinctive genetic markers, the researchers say the test should be able to identify which specific cancer a patient may be at risk of developing. Markers for lung cancer, for example, are different from markers for leukemia.

The other lead author of the Genome Research paper was Hariharan Easwaran, a cancer biology research fellow in the Johns Hopkins School of Medicine. Co-authors from Johns Hopkins, in addition to Wang and Baylin, were Yi Zhang, a doctoral student in Biomedical Engineering; and Elizabeth Griffiths, an oncology clinical fellow, James G. Herman, a professor of cancer biology, and Hetty E. Carraway, an assistant professor of oncology, all in the School of Medicine. Steven A. Belinsky, of the Lovelace Respiratory Research Institute in Albuquerque, N.M., was also a co-author.

Johns Hopkins Technology Transfer staff members have applied for international patent protection covering the testing technique and are in talks with a biotechnology company that has expressed interest in licensing the application.

The research was supported by grants from the National Cancer Institute, National Science Foundation, The Hodson Trust and Flight Attendant Medical Research Institute.

Filed under Research, School of Medicine