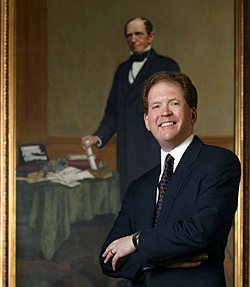 Lloyd Minor’s goal as provost is simple but daunting: to help every Johns Hopkins school become the best at what it does.

“There is not one set path to achieving our individual and common goals,” Minor said last week, shortly after his appointment was announced. “At Johns Hopkins, we have uniformity of values. If each of us sets the goal of excellence beyond our current status, and pursues that excellence with integrity, then Johns Hopkins University will not only be the pre-eminent research university in America but will achieve outstanding new advances in each of our divisions.”

The path to those advances, he said, includes learning what works in each division and then widely sharing knowledge about best practices for faculty recruitment and retention, student recruitment, building programs, developing education and training opportunities for undergraduates and graduate students, and increasing diversity.

“I have been inspired by recent efforts in the Provost’s Office to facilitate greater collaboration at the seams between schools and disciplines,” Minor said. “Those efforts are investments in our shared future as a university, and I look forward to continuing that very important work.”

Minor, who will move into the provost’s office tomorrow, Sept. 1, has been a Johns Hopkins faculty member for 16 years and most recently director of the Department of Otolaryngology–Head and Neck Surgery in the School of Medicine. He said he is humbled and honored to serve as the university’s 13th provost and as senior vice president for academic affairs, and that he looks forward to forming a close working partnership with President Ron Daniels and collaborating with faculty and staff members all across the university.

“Anyone coming into this job is going to have a lot to learn” about all the university’s divisions, institutes and other entities, said Minor, who has held the endowed Andelot Professorship in Laryngology and Otology and joint appointments in the departments of Biomedical Engineering and Neuroscience. “I’m excited about that,” he said. “It’s going to be a wonderful process. The opportunity to work with people with such diverse backgrounds and interests is one of the wonderful things about the job of provost.”

The provost is Johns Hopkins’ chief academic officer and the second-ranking member of the senior administration, coordinating and promoting the university’s research and education initiatives and overseeing a multitude of areas including—among many others—regulatory compliance, accreditation and institutional equity.

“Lloyd Minor is an exceptional scholar, clinician and scientist with an outstanding record in academic leadership,” said Daniels, who recommended the appointment to the executive committee of the university’s board of trustees. “He brings to university leadership a driving passion to make Johns Hopkins stronger in all its crucial dimensions: research, education and service. His passion is surpassed only by his ability to build consensus and implement ambitious, strategic priorities that are characterized by an uncompromising commitment to academic excellence.”

Minor was recruited to Johns Hopkins University in 1993 as an assistant professor and became department director in 2003. He said he has learned a lot in his time at the university.

“Leadership is first and foremost about working with people, promoting and encouraging the development and success of the people around you,” he said. “That’s what I’ve tried to do, first as a faculty member, then as a department director, and that is what motivated me to look at a leadership position and what excites me about this position. It comes down to working with people and shared values and developing shared strategies to promote excellence.”

During his six-year tenure as department director, the School of Medicine’s equivalent of department chair, Minor has worked to recruit and retain an outstanding and diverse faculty, expanded annual research funding by more than 50 percent, increased clinical activity by more than 30 percent and strengthened teaching and student training. He has served in other important roles in the School of Medicine, including chair of the Administrative Committee of the Medical Board and of the Practice Management Committee, and member of the Standing Committee on Discipline, the board of governors of the Clinical Practice Association and the Professorial Promotions Committee.

Minor is known internationally for his work on the physiological processes that mediate sensing and controlling motion and is most widely recognized for research on how the body perceives head motion and maintains balance. Other areas of expertise include Meniere’s disease and signal-processing mechanisms in vestibular pathways.

Minor has long been applauded as deeply committed to teaching as well as to research, Daniels said. He has reached out repeatedly over the years to teach undergraduates from the university’s Homewood campus and is a revered teacher in the School of Medicine, the president said. Minor is a fellow of the American College of Surgeons and American Academy of Otolaryngology–Head and Neck Surgery, past president of the Association for Research in Otolaryngology and past chair of the Auditory Research Study Section of the National Institutes of Health.

Minor succeeds Kristina Johnson, who had been provost since 2007 before she left this year to serve in the Obama administration as undersecretary of the Department of Energy. Scott L. Zeger, vice provost for research and a professor in the Bloomberg School of Public Health, has served as interim provost.

“Dr. Zeger has been overseeing two portfolios since March, and I am enormously grateful to him for his support and dedication over the past few months,” Daniels said. “I am particularly appreciative for the role that he has played in coordinating the university’s emergency preparedness efforts while advancing its academic agenda in a number of areas. Dr. Minor and I look forward to continuing to work closely with Dr. Zeger on the ambitious agenda he has unleashed for university research, which includes a number of exciting interdisciplinary initiatives.”

Minor earned his bachelor’s and medical degrees from Brown University in 1979 and 1982. He completed his surgical residency at Duke University, followed by a four-year postdoctoral research fellowship in vestibular physiology and then a residency in otolaryngology–head and neck surgery at the University of Chicago. Before coming to Johns Hopkins, he was a clinical fellow at the Otology Group and the EAR Foundation in Nashville, Tenn.

Minor, 52, was born in Little Rock, Ark. He is married to Lisa Keamy, a family practice physician in Baltimore, and together they have two children, Emily, 18, and Samuel, 15.