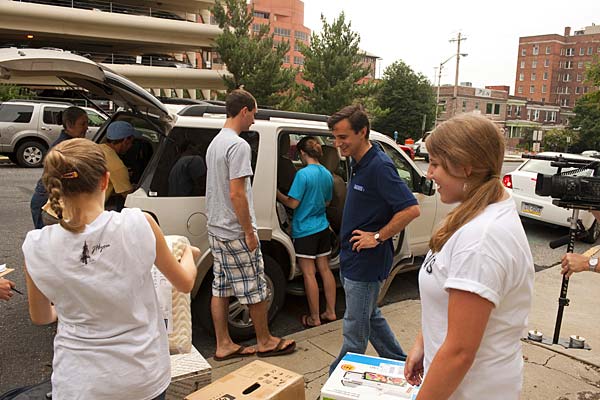 The nearly 80 percent humidity did little to wilt the smiles of the band of volunteers on hand to greet and assist the Class of 2013 on Friday, the first of two Move-In days. The welcome wagon performed like a finely tuned Johns Hopkins machine as SUVs, minivans and cars began to file through the Homewood campus’s north gate as early as 9 a.m.

Greeters met the cars at the entrance; walkers escorted students to locations where they would pick up residence keys, J-cards and everything else that would make them official Johns Hopkins students; and movers helped parents unload their vehicles and then transported the students’ belongings to their rooms.

Jonny DiTroia, Orientation 2009’s communications chair, zipped like a hummingbird from vehicle to vehicle, warmly welcoming parents and ensuring that they knew where to go. “Yep, I’m the crazy welcome guy,” said DiTroia, pausing just briefly before he extended a handshake and hello to a parent in the driver’s seat. Fellow Orientation staff dubbed him the “super greeter.”

Just before the rain came, President Ronald J. Daniels and Susan Boswell, dean of student life, joined the Move-In proceedings. On his first Move-In day, Daniels charmed parents with small talk as they waited for their vehicles to be unloaded. Daniels later greeted students at the Hopkins Inn, a bed-and-breakfast lodging located on St. Paul Street that the university has leased to meet housing needs.

Move-In day begins a busy first week for the 1,350 freshmen. On Sunday, they took part in the New Student Convocation, where President Daniels and the Homewood deans addressed them. On Wednesday, the first day of classes, upperclassmen will formally welcome the freshmen at the inaugural First Night celebration, a candlelight induction ceremony followed by a campuswide party.

The Class of 2013 also rang in a new Johns Hopkins tradition on Move-In days: the signing of the logbook. The same students will sign out in the logbook, and leave a note if they want, on their commencement day.

See more photos of move-in: Daniel Creasy from Admissions has posted a photo gallery showing how it all ran like clockwork.

Learn more about the Class of 2013