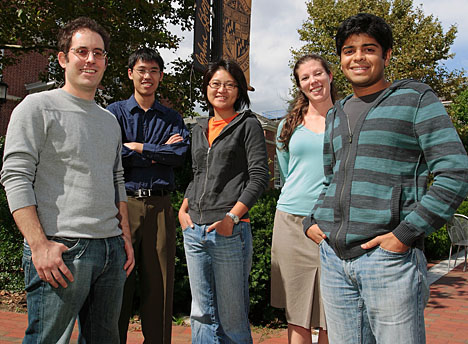 The California-based Siebel Foundation has selected five Johns Hopkins students from the Whiting School of Engineering and the School of Medicine as recipients of its annual Siebel Scholars awards, which provide $35,000 to each student to be used for the final year of graduate studies.

The Johns Hopkins recipients are among 80 students from prominent graduate schools in the United States and China to be designated as the Class of 2010 Siebel Scholars.

Siebel Scholars are chosen by the deans of their respective schools on the basis of outstanding academic achievement and demonstrated qualities of leadership. Siebel Scholars also serve as key advisers to the foundation, guiding the development of innovative programs that it initiates.

“It’s an honor to be selected from among the top bioengineering programs and [to] offer five of our outstanding graduate students entry into a vibrant community of exceptionally talented future leaders,” said Nick Jones, the Benjamin T. Rome Dean of the Whiting School. “The Siebel Scholars program will expand our students’ opportunities for entrepreneurship and collaboration, which are themes already integral to our program.”

In addition to receiving the $35,000 awards, the new scholars will convene with alumni of the program in spring 2010 to address the topic of climate change with renowned scientists, lawmakers and other experts.

The Johns Hopkins graduate students selected as 2010 Siebel Scholars in the bioengineering category are:

• Vasudev Bailey, of Bangalore, India, who is pursuing his doctorate in biomedical engineering. Under the supervision of Tza-Huei “Jeff” Wang, an associate professor of mechanical engineering and of biomedical engineering, and oncology professors Stephen Baylin and James Herman of the School of Medicine, he has been working on highly sensitive nanotechnology methods for early detection of cancer.

• Raymond Cheong, of Columbia, Md., who is concurrently pursuing a medical degree and a doctorate in biomedical engineering. Under the supervision of Andre Levchenko, an associate professor of biomedical engineering, he has used a blend of computational modeling and experimentation to study inflammation and has developed a novel microfluidic device for high-content cell screening.

• Sarah Hemminger, of Indianapolis, who is pursuing her doctorate in biomedical engineering. Under the supervision of Reza Shadmehr, a professor of biomedical engineering and of neuroscience, she has made important discoveries concerning motor memory and the neural basis of skill learning. Shadmehr also praised Hemminger for applying her neuroscience knowledge to the Incentive Mentoring Program, which she founded to help failing students in a high school near the East Baltimore campus.

• Shawn Lim, of Singapore, who is pursuing her doctorate in biomedical engineering. Under the supervision of Hai-Quan Mao, an associate professor of materials science and engineering, she has been developing biomaterials to influence the development of stem cells in ways that could facilitate regeneration in the nervous system.