The MESSENGER spacecraft will fly by Mercury for the third and final time on Sept. 29 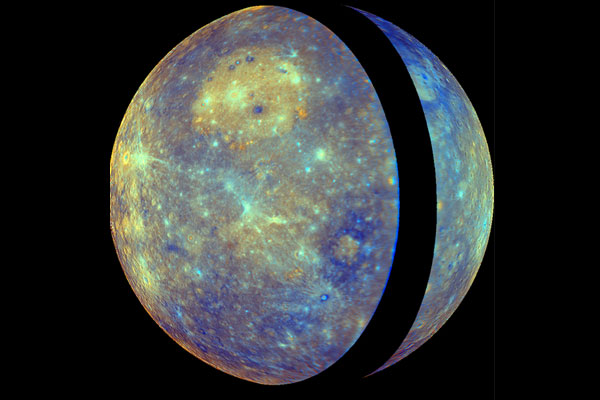 On Tuesday, Sept. 29, the MESSENGER spacecraft will fly by Mercury for the third and final time, passing 141.7 miles above the planet’s rocky surface for a final gravity assist that will enable it to enter orbit about Mercury in 2011. With more than 90 percent of the planet’s surface already imaged, the team will turn its instruments during this flyby to specific features to uncover more information about the planet closest to the sun.

“The first two flybys of Mercury revealed nearly half of the planet in detail for the first time,” said MESSENGER principal investigator Sean Solomon, of the Carnegie Institution of Washington. “During this third encounter, the MESSENGER camera will again image areas never before seen at close range, and we will obtain color images of other regions at resolutions superior to those of previous observations. Our other instruments will target interesting areas of the surface, atmosphere and magnetosphere for detailed measurements designed to address questions raised by observations made during the earlier flybys.”

Depending on the activity of the sun, Solomon said, MESSENGER might also view yet another distinct snapshot of how the planet interacts with conditions in interplanetary space driven by the behavior of our nearest star.

The first two flybys provided an unprecedented glimpse into the structure of the planet’s tenuous exosphere and the processes behind it. During this encounter, the Mercury Atmospheric and Surface Composition Spectrometer, or MASCS, will again make high spectral– and high spatial–resolution measurements of Mercury’s exosphere.

“Targeted scans of the planet’s cometlike tail by the MASCS Ultraviolet and Visible Spectrometer will permit a search for temporal variability in both the sodium and calcium components,” said MASCS instrument scientist Noam Izenberg, of Johns Hopkins’ Applied Physics Laboratory. “In addition, we will target the north and south polar regions for detailed observations of those species, and we will look for several new exospheric species.”

The Mercury Dual Imaging System, or MDIS, will capture 1,559 pictures of the planet.

“Using all 11 filters of the wide-angle camera, we are going to collect high-resolution color images of scientifically interesting targets that we identified from the second flyby, and at the same time MASCS will observe those same targets,” said APL’s Ralph McNutt, MESSENGER project scientist.

As MESSENGER approaches Mercury, MDIS’ narrow-angle camera will capture images of previously unseen terrain. Later, as the spacecraft departs, the camera will take high-resolution images of the southern hemisphere that will be used to create a mosaic to complement the high-resolution northern hemisphere mosaic obtained during the second Mercury flyby.

Images captured eight days before and 21 days after the probe’s closest approach to Mercury will allow MESSENGER scientists to create detailed phase curves of Mercury at multiple wavelengths, and searches will be conducted for possible satellites of Mercury as small as 100 meters in diameter.

Determining the composition of Mercury’s surface is a major goal of the orbital phase of the mission, and during this flyby the instruments focused on compositional measurements will have a third opportunity to observe Mercury.

The MASCS sensors—both UVVS and the Visible and Infrared Spectrograph—will spend about 30 seconds on each of 11 targets, two at locations also targeted for photometry, focusing on end-member compositional characteristics identified during the second flyby. The X-Ray Spectrometer will once again look for X-ray fluorescence from surface elements, depending on the level of solar activity, and the Gamma-Ray Spectrometer will acquire more counting data from approximately the same region that it surveyed during the second flyby.

The Neutron Spectrometer will use two spacecraft maneuvers to provide better Doppler filtering of encountered neutron fluxes, including a 180-degree spacecraft roll on the nightside (inbound) and a 45-degree roll on the dayside (outbound). The nightside maneuver will provide more information on the composition on the side of the planet away from that sampled during the first flyby, and the combination of dayside and nightside measurements will enable a test of the influence of planetary surface temperature on the thermal neutron fluxes, data important for properly interpreting the neutron fluxes to be measured during the orbital phase of the mission.

MESSENGER’s third Mercury flyby will provide more data on the correlation between high-resolution topography and high-resolution images of Mercury. The Mercury Laser Altimeter will range to Mercury’s surface and make a topographic profile along the instrument ground track. A shift in the longitude of closest approach by 17 degrees to the west and 3 degrees north from the position of closest approach for the second flyby will allow the data from the third flyby to augment and complement those from the second. In addition, the slower flyby speed (approximately 1.5 kilometers per second slower relative to the center of Mercury) will keep the trajectory closer to the planet longer.

“The data we gather will provide additional topography of surface features on Mercury for our ongoing studies of the morphology of craters and tectonic structures, such as thrust faults,” said MLA instrument scientist Olivier Barnouin-Jha, of APL. “It will also extend our equatorial view of Mercury’s global shape and allow us to confirm the discovery made during the first and second flyby of MESSENGER that Mercury’s equatorial region possesses a slightly elliptical shape.”

Anderson says that this flyby is the last opportunity to survey the magnetotail and magnetopause regions in the equatorial plane.

“The contrast in the system’s structure under different solar wind conditions already observed make it likely that the third flyby will yield new insights and perhaps more surprises regarding the dynamics of this smallest and most highly variable of the solar system’s planetary magnetospheres,” he said.

As with the previous two flybys, the magnetometer will record the magnetic field at the highest available observation rate of 20 vector magnetic field samples per second for a period of 12 hours centered on the time of closest approach. “This observing plan guarantees the highest possible science return from the encounter and will provide key observations to guide the magnetic field investigation plan for the prime orbital phase of the mission,” Anderson says.

”This flyby will not only be our last close look at the equatorial regions of Mercury; it is our final planetary gravity assist, and it will be important for the entire encounter to be executed as planned,” Solomon said. “As enticing as these flybys have been for discovering some of Mercury’s secrets, they are the hors d’oeurves to the mission’s main course: observing Mercury from orbit for an entire year.”