Scholars, fans of author’s work gather in the city he once called home 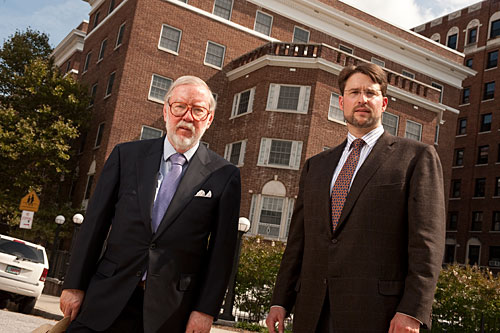 Even the great ones get writer’s block. F. Scott Fitzgerald described such a circumstance—and how he nudged himself out of it with a bus trip, a leisurely stroll and a trip to his local barbershop—in an article titled “Afternoon of an Author,” published in Esquire in 1936.

The author starts his story in the kitchen of his top-story apartment. He writes how he looked out the window during breakfast “at students changing classes on the college campus across the way.”

The college he refers to was Johns Hopkins; the campus, Homewood. He wrote those words when he lived in the Cambridge Arms Apartments, which today is Wolman Hall, a university-owned undergraduate residence building.

Fitzgerald called Baltimore home from 1932 to 1937, and although the prime reason he moved here is quite cheerless—his wife’s mental illness—Fitzgerald forged strong ties to the city. Even before he moved to Baltimore, Fitzgerald felt a kinship with the place, as his family was from Maryland and it was famously where his relative and namesake Francis Scott Key wrote “The Star-Spangled Banner.”

On Wednesday, Sept. 30, the first day of the conference, the George Peabody Library in Mount Vernon will host a reception and talk by Sharon Hamilton, a lecturer at Georgetown University, about H.L Mencken, Fitzgerald and The Smart Set magazine. As editor of The Smart Set, Mencken was the first to publish a Fitzgerald story, “Babes in the Woods,” in 1919.

The Johns Hopkins University Press, the F. Scott Fitzgerald Society and the Friends of the Sheridan Libraries will sponsor the talk and reception, to be held from 6 to 8 p.m. It will highlight the new Peabody Library exhibit A View of the Parade: H.L. Mencken and American Magazines.

Fitzgerald long admired Mencken, and the two would later become close friends. It was Mencken who referred Fitzgerald to Adolf Meyer, chief of Psychiatry at the Johns Hopkins School of Medicine, when Fitzgerald’s wife, Zelda, suffered her second nervous breakdown.

The Fitzgeralds moved to Baltimore so that Zelda, diagnosed with schizophrenia, could receive treatment at The Johns Hopkins Hospital’s Henry Phipps Psychiatric Clinic, where Meyer had been director from its inception in 1913.

During her stay at the Phipps Clinic, Zelda wrote her semi-autobiographical novel, Save Me the Waltz, and after her release, a play called Scandalabra. While there, she also made many paintings and drawings, seven of which were donated to the English Department in March 1971 by Mr. and Mrs. Sewell Weech. Six of the drawings, which now hang at Evergreen Museum & Library, will be on view in the museum’s Reading Room during a conference-related reception being held there from 5 to 7 p.m. on Thursday. The event, sponsored by the F. Scott Fitzgerald Society and The Hopkins Review literary journal, will feature a reading of Fitzgerald’s work by Richard A. Davison, professor emeritus at the University of Delaware.

John Irwin, Decker Professor in the Humanities at Johns Hopkins and a member of the F. Scott Fitzgerald Society, has taught a course on Faulkner, Fitzgerald and Hemingway at the Writing Seminars for the past 30 years. Irwin regards Fitzgerald as one of 20th-century America’s best fiction writers. Recently, Fitzgerald returned to the public eye with the release of The Curious Case of Benjamin Button, a film based on one of his short stories, which the author set in Baltimore.

“Fitzgerald’s impact is immense. Consider that just about every junior high or high school student has read The Great Gatsby before coming to college,” Irwin said. “Fitzgerald came back with a real bang in the 1950s and never left.”

Irwin describes both the 1925 Gatsby and Tender Is the Night, which was published in 1934, as masterpieces.

“The Last Tycoon would have been a third masterpiece if he lived to finish it,” Irwin said. “The Great Gatsby is great in so many different ways. It’s a short, self-contained book that is almost perfect. You can’t imagine changing any word in it. Tender Is the Night is a bigger book that tackles larger themes and has the power to break your heart.”

Tender Is the Night’s main character, psychiatrist Richard “Dick” Diver, is depicted as a graduate of Johns Hopkins Medical School. In the book, Fitzgerald writes of the young Diver as a “tornado who hurried through the old red buildings of Hopkins” and makes reference to the Jesus statue located in the rotunda of the Billings Administration Building.

Galambos said that by various accounts Fitzgerald loved many elements of his life in Baltimore.

“He was a Key and proud of it, and always talked about his ancestors,” she said. “And he and Mencken were very close. They talked and socialized often.”

Fitzgerald scholar John D. Rockefeller V, a part-time lecturer with the School of Arts and Sciences, said that Fitzgerald’s life in Baltimore and his attempts to salvage his wife’s sanity had a deep influence on the author’s later writings. Rockefeller said that Fitzgerald went so far as to “plagiarize” some of his wife’s “unbalanced” letters and weave them into his stories and novels. Rockefeller specifically delves into this in his course called Fitzgerald’s Literature of Madness and Critique of Progressivism.

Rockefeller will present at the conference a paper focused on how Fitzgerald conceived both The Beautiful and Damned and Tender Is the Night as fulfilling Herbert Croly’s call in The Promise of American Life for a more progressive America—a call that Fitzgerald lamented progressives themselves ignored when they embraced the cause of Prohibition.

He said that the conference, which is open to the public, is a good opportunity to reflect on a great writer.

“Baltimore should be as proud of Fitzgerald as it is of Poe,” said Rockefeller, who has taught several courses on Fitzgerald. “Tender Is the Night was written here, which is a brilliant novel, a tour de force. Fitzgerald’s novels are often admired for their lyrical prose but seldom esteemed for their intellectual rigor. Fitzgerald lived with the tag of being a drunken, gifted writer, but he was a deep thinker—just as smart as Faulkner.”

On Friday, the conference will host a buffet dinner at the Belvedere Hotel featuring two other Johns Hopkins faculty members: John Barth, professor emeritus, and Alice McDermott, the Richard A. Macksey Professor of the Humanities. Barth and McDermott, both of the Writing Seminars, will read favorite passages from Fitzgerald’s works and will speak briefly about his writing.

The International F. Scott Fitzgerald Society meets every two years at its conference, and this is the first time it will be held in Baltimore.

To register for conference events and a full schedule, go to www.fscottfitzgeraldsociety.org.