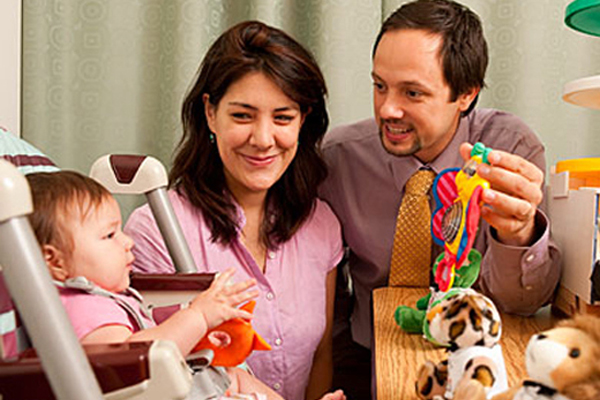 This is the first in an occasional series on Johns Hopkins research funded by the American Recovery and Reinvestment Act of 2009. If you have a study you would like to be considered for inclusion, contact Lisa De Nike at lde@jhu.edu.

Rats do it; so do monkeys, pigeons and people: They quickly and intuitively size up the number of objects in their environment. It’s this inborn “approximate number system” that enables, for instance, a skittering rodent to quickly ascertain which garbage heap offers the most delectable food waste, or helps an in-a-rush motorist decide which tollbooth lane will offer the quickest passage.

Though research indicates that we are born with this sense (scientists contend that it probably evolved very early, to help animals and our human ancestors survive in the wild), little is known about how number sense changes and develops throughout the human life cycle and how it affects the way people comprehend mathematics.

That’s why a team of psychologists at The Johns Hopkins University’s Krieger School of Arts and Sciences is using a $1.6 million National Institutes of Health grant, underwritten in part by the federal stimulus package, to finance a multifaceted study aimed at decoding some of the mysteries of the human approximate number system, or ANS. They want to find out, for instance, everything from how it changes from infancy through adulthood to the impact that number sense acuity has on later success (or failure) in academic and higher order mathematics.

Lisa Feigenson is teaming up with her research partner and husband, Justin Halberda, both assistant professors in the Department of Psychological and Brain Sciences, on the project.

“What we are setting out to do is to examine numerical ability in infants, young children and adults, and to document how it changes over the course of their development,” said Feigenson, who also co-directs the Homewood campus–based Laboratory for Childhood Development, where she and Halberda conduct research into everything from how infants keep track of objects to whether babies and children are logical and rational when making decisions (they seem to be).

The team came to Johns Hopkins from Harvard University in summer 2004 to establish the laboratory, a brightly painted, toy-strewn, cheery facility where children ages 3 months to 6 years participate in a variety of studies aimed at shining a light on human development’s many aspects.

Though Feigenson specializes in the study of how infants keep track of and remember objects, and Halberda primarily studies logical reasoning and language, this grant merges the partners’ research interests into one large project that will delve into various aspects of the human approximate number system. For instance, though we know that babies, children and adults can all rapidly estimate, without counting, the number of items put before them, an understanding of how this ability changes over time is lacking, Halberda says.

“And we know even less about how this untrained ability interacts with, and even possibly affects, the formal math that we later learn in school. One of our aims is to track individual children over a period of several years so that we can understand how their approximate number system develops, both prior to and during exposure to school mathematics,” he said.

Though Feigenson and Halberda hope to shed light on how the approximate number system changes from infancy through young adulthood, one of the other key questions they aim to answer is whether individual differences in numerical acuity will accurately predict whether children will end up being good math students. Last year, the team published in the journal Nature a study tentatively linking number sense to math achievement in school. The researchers found that knowing how precisely a high school freshman can estimate the number of objects in a group reflects how well he has done in math as far back as kindergarten.

“We learned that good number sense at age 14 correlates with higher scores on standardized math tests throughout a child’s life, and weaker number sense at 14 predicts lower scores on the same tests,” Halberda said. “What this seems to indicate is that the very basic number sense we humans share with animals has some impact on the formal mathematics we learn in school, and these things may inform and interact with each other throughout our lives.”

Halberda says that he is intrigued by numbers because of his interest in logical and scientific thinking. Feigenson has a different reason.

Feigenson says that studying the ANS is important because it provides an example of an ability that is innate—present in animals and humans from birth, without training—but that in humans is also significantly shaped by experiences that she calls “uniquely human.”

“It’s only humans, or a small subset of humans, who ever learn to solve quadratic equations or do long division, for that matter,” she said. “The basis for these abilities may be something evolutionarily ancient that we share with rats and monkeys. Because of this, the ANS is an excellent opportunity to study the interaction of knowledge that is inborn with knowledge that is the product of formal instruction.”

In addition to contributing to basic cognitive science knowledge, the team’s research results may ultimately benefit people with dyscalculia, a learning disability that afflicts about one in every 15 people and brings with it innate difficulty in comprehending mathematics and other number-based skills.

“Our project may have important repercussions not only for children with math-specific cognitive deficits but also for studying impairments in understanding numbers, such as happens after people suffer a stroke or other illness,” Feigenson said.

The team’s study is one of more than 250 stimulus-funded research grants totaling more than $114 million that Johns Hopkins has garnered since Congress passed the American Recovery and Revitalization Act of 2009 (informally known by the acronym ARRA), bestowing the National Institutes of Health and the National Science Foundation with $12.4 billion in extra money to underwrite research grants by September 2010. The stimulus package—which provided $550 billion in new spending, including the above grants, and $275 billion in tax relief—is part of President Barack Obama’s plan to kick-start a stagnant economy by doling out dollars for transportation projects, infrastructure building, the development of new energy sources and job creation, and by financing research that will benefit humankind.