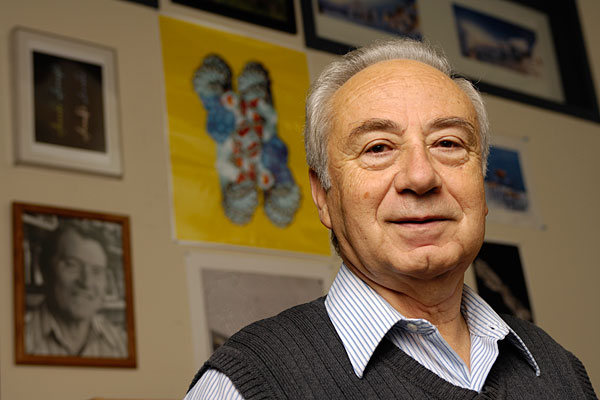 Evangelos “Van” Moudrianakis, a Johns Hopkins University biologist and biophysicist, has won the 2009 Bodossaki Aristeio in Biomedicine for his pioneering work shedding light on the structure of the complex web of DNA and proteins (histones) that make up chromatin—work that has provided valuable insight into how the genetic information of chromosomes is regulated.

Often considered the “Greek Nobel Prize,” the Bodossaki Aristeio is given every two years by recommendation of an international committee through the board of trustees of the Bodossaki Foundation in recognition of any scientist of Greek heritage the world over who has devoted his or her life to science, and whose work has furthered and enhanced knowledge. This is the first time the award has been given to a biologist.

“It is a great honor to be recognized for lifelong contributions of your work, especially when that constitutes something that, in its path, faced so many challenges and had to overcome accepted dogmas,” said Moudrianakis, a professor in the Biology Department of the Krieger School of Arts and Sciences. “However, all these provided the inspiration and empowered the will of the team to bring the long project to some meaningful state. It is rewarding to see now that the results of our work are used by others as the architectural framework of the new field of epigenetics.”

Moudrianakis, who was born and raised in Crete, Greece, and came to Johns Hopkins for graduate studies, said he is particularly proud that “all of the work recognized in this award” was performed by young people who started as graduate students in the departments of Biology and Biophysics and not by “[more] senior talent imported from other institutions.”

Karen Beemon, former chair of the Johns Hopkins Department of Biology, attended the awards ceremony and symposium, which were held in June.

“I was thrilled to hear that Van had received this award in recognition of his pioneering contributions in the field of chromatin structure, the crystallographic solution of the structure of the protein core of the nucleosome and the discovery of the histone fold,” she said. “The work of his team has given us a deeper understanding of the molecular mechanisms of the chromosomal regulation of the genetic information in DNA.”