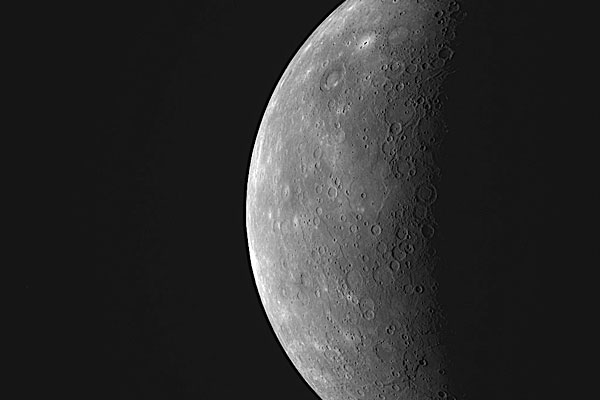 With more than 90 percent of the planet’s surface already imaged, MESSENGER’s science team had drafted an ambitious observation campaign designed to tease out additional details from features uncovered during the first two flybys. But an unexpected signal loss prior to closest approach hampered those plans.

At approximately 5:55 p.m. EDT, the spacecraft passed by Mercury at an altitude of 142 miles and at a relative velocity of more than 12,000 miles per hour, according to Doppler residual measurements logged just prior to the closest approach point. As the spacecraft approached the planet, MESSENGER’s Wide Angle Camera captured a striking view that shows portions of Mercury’s surface that had remained unseen by spacecraft even after the three flybys by Mariner 10 in 1974 and 1975 and MESSENGER’s two earlier flybys in 2008.

“This third and final flyby was MESSENGER’s last opportunity to use the gravity of Mercury to meet the demands of the cruise trajectory without using the probe’s limited supply of on-board propellant,” said MESSENGER mission systems engineer Eric Finnegan, of Johns Hopkins’ Applied Physics Laboratory.

A portion of the complicated encounter was executed in eclipse, when the spacecraft was in Mercury’s shadow and the spacecraft—absent solar power—was to operate on its internal batteries for 18 minutes. Ten minutes after entering eclipse and four minutes prior to the closest approach point, the carrier signal from the spacecraft was lost, earlier than expected.

Finnegan said that the spacecraft autonomously transitioned to a safe operating mode, which pauses the execution of the command load and “safes the instruments” while maintaining knowledge of its operational state and preserving all data on the solid-state recorder.

“We believe this mode transition was initiated by the on-board fault management system due to an unexpected configuration of the power system during eclipse,” Finnegan said.

MESSENGER was returned to operational mode at 12:30 a.m. with all systems reporting nominal operations. All on-board stored data were returned to the ground by early morning and are being analyzed to confirm the full sequence of events.

“Although the events did not transpire as planned, the primary purpose of the flyby—the gravity assist—appears to be completely successful,” Finnegan said. “Furthermore, all approach observing sequences have been captured, filling in additional area of previously unexplored terrain and further exploring the exosphere of Mercury.”

“MESSENGER’s mission operations and engineering teams deserve high commendation for their professional and efficient approach to last night’s spacecraft safe-mode transition,” said MESSENGER principal investigator Sean Solomon of the Carnegie Institution of Washington on the morning following the flyby. “They quickly diagnosed the initial problem, restored the spacecraft to its normal operating mode and developed plans to recover as much of our post-encounter science observations as possible. Most importantly, we are on course to Mercury orbit insertion less than 18 months from now, so we know that we will be returning to Mercury and will be able to observe the innermost planet in exquisite detail.”

MESSENGER (which stands for MErcury Surface, Space ENvironment, GEochemistry and Ranging) is a NASA-sponsored scientific investigation of the planet Mercury and the first space mission designed to orbit the planet closest to the sun. The spacecraft launched on Aug. 3, 2004, and, after flybys of Earth, Venus and Mercury, will start a yearlong study of its target planet in March 2011. APL built and operates the spacecraft and manages the mission for NASA.

For more information about this encounter, go to http://messenger.jhuapl.edu/mer_flyby3 .html.