Now on tap: The ‘fizzics’ of beer 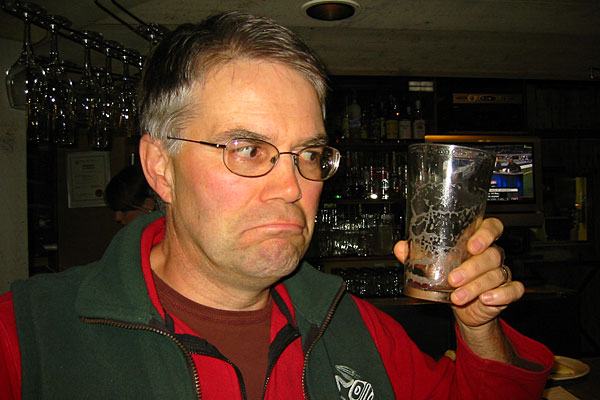 Pour beer into a glass and science happens—although some might think it magic.

After the liquid touches the surface, foam bursts forth from a formation of bubbles that proceed to dance, swirl, collide and then rise to form a signature frothy head. While the head rises—a process pleasantly referred to as creaming—smaller bubbles cascade down and the beverage’s true color manifests, whether it is golden pale, porter black or somewhere in between.

A little bubble drainage and Oswald ripening (the passage of gas between adjacent bubbles) later, a layer of dry foam is left resting upon liquid beer.

“First impressions are important,” Denny writes, “and so commercial brewers have spent a lot of time and effort to ensure that their beer froths, foams, bubbles, effervesces, sparkles or fizzes in the most appealing manner.”

Accomplished home-brewer and physicist Denny hazards that many folks, not just “beer-ophiles,” contemplate their pints. He certainly does, and now he’s given armchair physicists and beer lovers something to sip on.

In Froth!, his fourth book for the JHU Press, Denny provides a scientifically sound and often witty investigation of the physics and chemistry of beer. He recounts and explains the history of and key technological advances in brewing, provides basic instructions for making your own and then looks at the physical phenomena contained within a pint of beer. Along the way he defines the main concepts and terms involved in the beer-making process and shows how you can subject the technical aspects of brewing to scientific analysis.

Denny answers such questions as where the bubbles in beer come from, where they go after pouring and just why ales, porters and lagers look and behave differently.

He spends a whole chapter on bubbles, which he says go together with beer like music does with dancing.

Beer in the can, bottle or barrel contains a lot of dissolved carbon dioxide under pressure. When the beer is poured, the pressure is released and the carbon dioxide wants to come out of the solution. What gives this reaction a kick, he writes, are nucleation sites—either impurities in the beer or on the surface of the glass—that permit gas to exit the liquid and fly upward as bubbles.

Ever notice how when you pour beer into a container with a rough surface, or too quickly, that it foams excessively, or “fobs”? Denny says that’s because the glass has many nucleation sites and the fast pour agitates the beer, thus accelerating the chemical reaction.

Just a few pages into the book, the reader gleans that Denny both knows his science and loves his beer.

After earning a doctorate in theoretical physics from Edinburgh University, Denny pursued research at Oxford University from 1981 to 1984 before moving into a career in the aerospace industry. He is the author of many popular science books, including Ingenium: Five Machines That Changed the World, Blip, Ping and Buzz: Making Sense of Radar and Sonar and Float Your Boat! The Evolution and Science of Sailing, all published by JHU Press.

Froth! joins a growing list of books from the Press intended to inject some fun and real-world application into the field of physics. The series includes such titles as The Physics of Basketball, Exposed: Ouji, Firewalking and Other Gibberish, The Isaac Newton School of Driving: Physics and Your Car, The Physics of Hockey and the upcoming Good Vibrations: The Physics of Music (November) and Gold Medal Physics: The Science of Sports (December).

Trevor Lipscombe, editor in chief of JHU Press, said that the books are intended to put a new spin on physics, which for some can be an impenetrable and dry subject.

“Some of this stems from my own high school experience, where physics was all equations and wooden blocks sliding down inclined planes,” said the British-born Lipscombe, author of the recently released The Physics of Rugby. “We hope that books like these can make physics more teachable and interesting, and that high school teachers can use examples like these in their classes. Instead of having students just solve equations, how about making them look at a basketball and think about the optimum angle to throw it to make a basket?”

Lipscombe said that Froth! began with a discussion on what subject to tackle next in the “physics of” series.

“And beer just happens to be a topic of mutual interest between Mark and me,” Lipscombe said. “We thought we could educate and entertain with this topic. Mark wanted to take people who are interested in beer and get them interested in the world of science. Mark does a great job of keeping the science interesting by throwing in some wonderful anecdotes and funny one-liners. You can ignore the equations, and it’s still a very good read.”

The semiretired Denny, born and raised in Yorkshire, England, now lives on Vancouver Island in British Columbia, where he writes books, watches birds and brews beer. He began home-brewing 15 years ago, when he was living in Edinburgh, Scotland, and got hooked on the hobby.

“In the book, I offer some tips on how to brew better beer, but there are a lot of good books out on the subject,” he said. “Ultimately, I hope people who pick up the book learn some science and a bit of beer history, which I put in to provide some context.”

Historians agree that beer brewing can be traced back some 10,000 years to the Middle East, and from there spread out to other parts of the world.

Put simply, beer is a slightly alcoholic beverage made by fermenting starches or cereals (most commonly, malted barley) and flavored with hops.

Early beer was dark, cloudy, smoky and tangy in flavor, stronger and less carbonated. All that changed with the industrial revolution, Denny says, when beer could be made in mass quantities with the help of steel, steam and refrigeration.

Specifically, the industrial revolution allowed for the creation of Pilsener, a golden-colored lager beer that originated in the city of Pilsen in the Czech Republic.

“Pilseners and pale ales became commonplace and quickly took over the world, and today account for most of the beer made,” said Denny, mentioning beers like Budweiser and Beck’s. “Before the industrial revolution, you made beer from wood-burning fire, and that resulting smoke made its way into the beer. With steam, the change in the taste and appearance of beer became quite profound. Refrigeration is also key, which interestingly was invented by a brewer in Germany.”

Denny says that when you get down to it, beer is a complex liquid that behaves in its own unique way. One of his personal favorites is Guinness, the Irish beer known for its creamy froth.

“If you look at Guinness with a magnifying glass, you see that it produces very small bubbles that after a minute or two fall down the side of the glass,” he said. “It’s actually quite mesmerizing, but then again I have been known to stare at my beer rather intently.”

Denny admits that he enjoyed researching his latest book.

“To be honest, this book did involve me going to pubs and drinking beer,” he said. “Sometimes you have to make sacrifices for your art.”

In connection with the release of Froth! and the worldwide celebration of Oktoberfest, the Johns Hopkins Alumni Association is sponsoring a three-stop East Coast book tour that involves a now sold-out event in Baltimore, on Oct. 12 at Max’s Tap House in Fell’s Point. The tour also includes stops at New York City’s Heartland Brewery on Oct. 14 and Washington, D.C.’s Capitol City Brewing Company on Oct. 16.

Froth!, $25, is available at major bookstores and through the JHU Press Web site, www.press.jhu.edu.