Leaders of the pack

Cross-country runners are first JHU women’s team ranked at No. 1 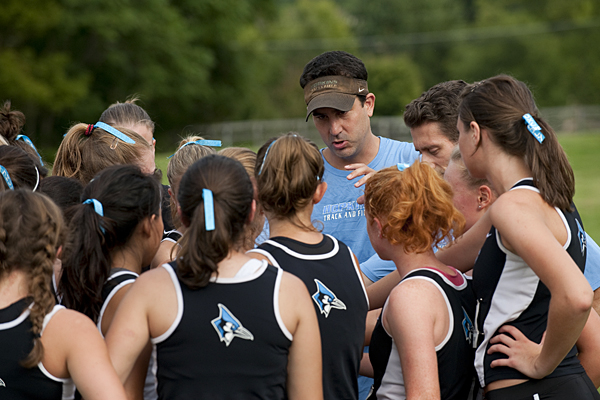 Van Allen was rightfully pleased and proud of the team, but the former standout collegiate runner views the season as a distance race. It’s more about crossing the finish line first, he says, than a fast split time.

“Rankings are just a few coaches’ opinions,” Van Allen says. “So whether we are ranked No. 1 or No. 2, we know that we’re one of the top three teams in the country. All that really matters is what we do Nov. 21 [at the Division III Cross-Country Nationals]. Right now, we are focused on what we need to do between now and then. Still, I think our women’s team should be proud of that No. 1 ranking and proud of what they accomplished up to this point in the season.”

He does appreciate the historical significance of the accomplishment. The milestone marked the first time a Johns Hopkins women’s team, in any sport, had been ranked No. 1 in a national poll.

Women’s cross-country, which dipped to No. 2 in the poll last week, has come a long way under Van Allen’s tenure.

A 1998 graduate of the University of Maryland, Van Allen earned his bachelor’s degree in kinesiological sciences. At Maryland, he competed on the cross-country and track and field squads. He earned All-East cross-country accolades and was a finalist at the ACC Championships in the 1500 meters. Right before joining Johns Hopkins, Van Allen served as volunteer assistant coach for the Terps’ cross-country team.

Van Allen, 33, joined the Blue Jays coaching staff in 1999 as an assistant assigned to the development of women’s distance runners. He became head coach in the fall of that year.

He inherited a Johns Hopkins team of just seven runners who were often outmatched at competitions. In 1999, the team finished 10th out of 10 teams in the Centennial Conference for both cross-country and track.

By the end of his first year, Van Allen had doubled the size of the squad. Then he brought in some top-tier recruits, and the Blue Jays slowly crept up the standings during the next few years. The team cracked the top three in 2006 and in 2007 earned its first-ever trip to the NCAA Championships by placing third in the Mideast Regionals. The team went on to finish 29th out of 32 teams at the nationals.

Van Allen says that the goal at the start of the 2009 season was to finish in the top three in the nation and challenge for the top spot at the nationals.

The team, ranked No. 5 in the national pre-season poll, got out of the blocks quickly.

Johns Hopkins ascended to the top of the poll after one of the best performances in school history, at the Purple Valley Classic at Williams College on Sept. 27. In a field that included defending national champion and then top-ranked Middlebury, 7th-ranked Williams College and 23rd-ranked Plattsburgh, the Blue Jays placed three runners in the top five and five in the top 10 to claim the team title at the prestigious event.

“We really took it to them and felt we were deserving of our No. 1 rank based on that performance,” says the tall and lean Van Allen, who would still be running competitively if he hadn’t suffered a serious Achilles tendon injury in 2004.

In Division III cross-country, the women run 5K and 6K races on a variety of terrains, mostly grass and dirt trails. The outdoor season begins in early September and ends in November with the NCAA Championships, which this year will be held in Ohio.

Assistant coach Ryan Orner says that each cross-country competition is unique and presents its own challenge.

“One week you’re running on a golf course, and the next you might be running up the side of a mountain, so the winning times also vary,” Orner says. “It has a lot to do with the weather, too. You could be running in snow over hills or in 60-degree weather on flat grass.”

The 2009 women’s squad features 32 runners. The number who compete varies from race to race. “Sometimes everyone runs, but for other races we might just bring out our top 10 girls,” Van Allen says.

The team is led by senior All-American Laura Paulsen, the most decorated runner in school history. Paulsen qualified individually for the NCAA Championships as a freshman before leading the Blue Jays to the event in 2007 and 2008. Paulsen is having a tremendous 2009 campaign and in late September was named Centennial Conference Runner of the Week. Senior Mira Patel, a chemical and biomolecular engineering major from Moraga, Calif., earned the same honors the following week for her efforts at the Paul Short Invitational at Lehigh University on Oct. 2. The team’s average time of 21:58 in the 6K race was a season best, and the top five runners for Johns Hopkins all posted their best times of the season.

Paulsen says that the pre-season time trials gave her a hint that 2009 could be a special year.

“You could tell that people did a great job of summer training,” says Paulsen, a biomedical engineering major from Lutherville, Md. “There were so many people I was impressed with. I was like, wow, this is going to be a great season.”

Megan Brower, a junior biology major, says that two of the keys to the team’s success have been the spillover confidence from last year and the team’s chemistry.

“The top girls on the team are really close timewise, so we pack up a lot, which makes a huge difference. We often yell at each other during the race. Like, ‘C’mon Megan, c’mon Nadia, run with me. Let’s move up another group of girls or into the lead pack,’” says Brower, who hails from Cary, N.C. “We encourage and push each other. We are motivated and have a lot of healthy competition on the team.”

Van Allen says that the team collectively realized last year that it could compete at the highest level. Orner says that members of the men’s team, who sometimes train with the women, have mentioned to him that the women run as if they are possessed.

“This year the team has really elevated itself one more notch,” he says. “From a training perspective, we made no major changes, just tweaked a few things. We added more 20-second hill sprints and threshold workouts, but due to the maturity of the team and the amount of seniors, I thought we could handle it.”

The women also do core workouts and weight train in the gym, although not always gladly.

Paulsen says that from a runner’s perspective, the No. 1 ranking was an honor. But she clearly follows the coach’s lead when talking big picture.

“[The No. 1 ranking] was awesome. We were really excited because it came after our performance at the Williams meet,” she says. “But it’s still early. We have to not get too overconfident and let it get into our heads too much. We need to be happy for the moment and continue to be focused on our workouts. We realize we have a lot of room for improvement before nationals.”

Like Van Allen says, it’s all about peaking in November.

Johns Hopkins will next be in action at the Centennial Conference Championships, to be held at 11 a.m. on Saturday, Oct. 31, at Gettysburg College in Gettysburg, Pa.