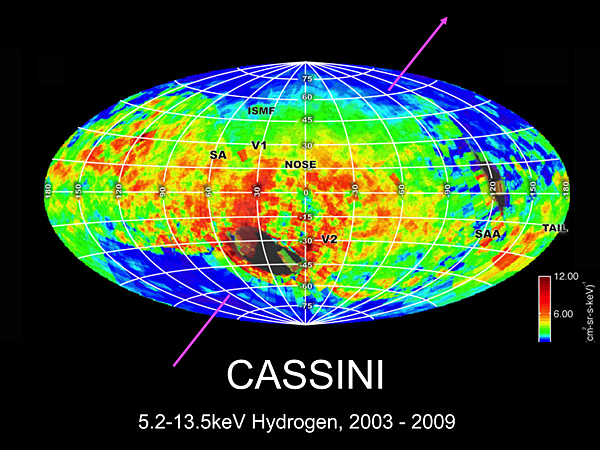 In a paper published Oct. 15 in Science, researchers from the Johns Hopkins Applied Physics Laboratory present a new view of the region of the sun’s influence, or heliosphere, and the forces that shape it. Images from one of the Magnetospheric Imaging Instrument’s sensors, the Ion and Neutral Camera, known as MIMI/INCA, on NASA’s Cassini spacecraft suggest that the heliosphere may not have the cometlike shape predicted by existing models.

“These images have revolutionized what we thought we knew for the past 50 years; the sun travels through the galaxy not like a comet but more like a big, round bubble,” said Stamatios Krimigis, principal investigator for MIMI, which is orbiting Saturn. “It’s amazing how a single new observation can change an entire concept that most scientists had taken as true for nearly 50 years.”

The INCA images suggest that the solar wind’s interaction with the interstellar medium is instead more significantly controlled by particle pressure and magnetic field energy density.

“The map we’ve created from INCA’s images suggests that pressure from a hot population of charged particles and interaction with the interstellar medium’s magnetic field strongly influence the shape of the heliosphere,” said Don Mitchell, MIMI/INCA co-investigator at APL.

Since entering into orbit around Saturn in July 2004, INCA has been mapping energetic neutral atoms near the planet, as well as their dispersal across the entire sky. The energetic neutral atoms are produced by energetic protons, which are responsible for the outward pressure of the heliosphere beyond the interface where the solar wind collides with the interstellar medium, and which interact with the magnetic field of the interstellar medium.

“Energetic neutral atom imaging has demonstrated its power to reveal the distribution of energetic ions, first in Earth’s own magnetosphere, next in the giant magnetosphere of Saturn and now throughout vast structures in space-out to the very edge of our sun’s interaction with the interstellar medium,” said Edmond C. Roelof, MIMI/INCA co-investigator at APL.

Researchers from the University of Arizona, Tucson; the Southwest Research Institute; and the University of Texas, San Antonio contributed to the article. The Cassini-Huygens mission is a cooperative project of NASA, the European Space Agency and the Italian Space Agency. JPL, a division of the California Institute of Technology in Pasadena, Calif., manages the Cassini-Huygens mission for NASA’s Science Mission Directorate, Washington, D.C. The Cassini orbiter was designed, developed and assembled at JPL. The Magnetospheric Imaging Instrument was developed by APL.

More information on the Cassini mission is available at www.nasa.gov/cassini, http://Saturn.jpl.nasa.gov and on the Magnetospheric Imaging Instrument Web site at http://sd-www.jhuapl.edu/CASSINI