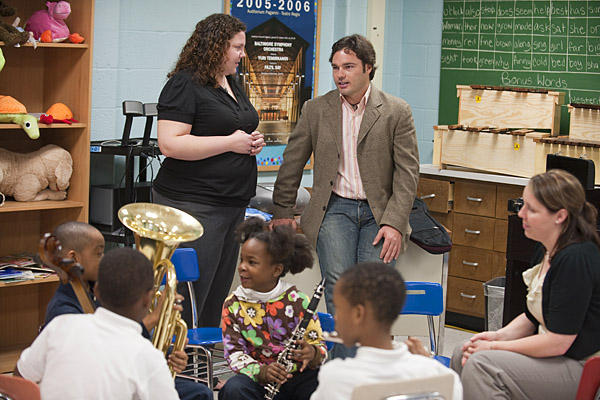 So it caught him somewhat off guard when the music teachers, most of whom were new to the area, wanted instead to learn how to write a grant, get the school’s clarinet repaired or find a good local restaurant.

“What I quickly realized is that a lot of teachers had a good sense of the pedagogy and were on solid footing. It was the extra things that were the issue,” says Trahey, one of the two current mentors in the program. “There might be a problem with the principal, a budget issue or they’re having a hard time adapting to life in the big city.”

The Music Teacher Mentoring Program was founded in 1998 by then Peabody Preparatory Dean Fran Zarubick. Zarubick and others at Peabody wanted to address the high turnover rate among the city’s elementary and middle school music teachers, and at the same time promote the arts and engage the community.

By pairing up new music teachers with mentors from Peabody, the program could stabilize and improve the schools’ music programs and inspire a new generation of artists.

Currently, the program provides support to roughly 70 teachers in 70 schools.

Trahey says that many of the city’s music teachers come from outside the area or are from well-supported programs where they never had to worry about such issues as lack of equipment, length of classroom instruction time, budget cuts or student disciplinary concerns.

“And now they come to the inner city, and they’re having to deal with many or all of those things,” Trahey says. “They might come into a situation where they are the only person in the building advocating the arts, and they clash heads with the school’s principal.”

Trahey, who holds a bachelor’s degree in performance and music education from Peabody and a master of music degree from Yale, directed educational programming and outreach events for the Hartford (Conn.) Symphony Orchestra just prior to joining Peabody’s faculty. He has taught at Yale and the Baltimore School for the Arts and in the Baltimore City Public Schools system. As a teaching artist, he has presented musical demonstrations to more than 40,000 schoolchildren.

Trahey also teaches a course in Community Engagement at the Conservatory and directs Peabody’s Tuned-In program, which offers full Peabody Preparatory scholarships to promising public school music students. Once accepted, the students receive a weekly private lesson with Preparatory faculty, the opportunity to work with accompanists and tickets for them and their families to attend concerts and other cultural events around Baltimore.

The Music Teacher Mentoring Program’s lead mentor is Eric Rasmussen, chair of Peabody’s Early Childhood Music program, which teaches children the joys of music through listening, singing, moving, dancing and playing. Rasmussen, who has taught early childhood music since 1991 and joined the Peabody Preparatory in 2000, is also a composer and educational consultant for early childhood music recordings.

Together, Trahey and Rasmussen target first- and second-year music teachers in the city whom they feel could most benefit from a mentoring experience. Trahey says that this often involves cold-calling, or literally knocking on doors, to inquire if schools have a new music teacher.

The two want to find teachers who are receptive and want assistance. Once they make a connection, the mentors work with the teachers to help them achieve their goals. This could take the form of an instrument lesson, finding ways to buy new or used instruments or learning techniques for dealing with unruly students. Trahey says that he meets with some mentees regularly, while others he hears from just once in a while, when they are in need of assistance. Teachers in the program and their students sometimes attend Peabody concerts or tour the campus.

Rasmussen says that a common concern for the teachers is maintaining class discipline. To help combat the issue, Rasmussen recommends a lesson plan with lots of components so that if something is not working, the teacher can move on quickly. “I tell them it’s best to overplan. That way you are able to adapt on the fly and still accomplish the objective you had in mind,” he said.

Many issues, he says, revolve around poor communication between teacher and administration.

For example, teachers may arrive at a school expecting to lead the band but are asked to teach general music instead. “Now they are a fish out of water in terms of what their expertise is,” he said. “We can sit down with the teachers and take them through what they have to know.”

Preparatory Dean Carolee Stewart says that the Music Teacher Mentoring Program and Tuned-In, which she helped conceive and implement, are just two of the ways that Peabody is actively engaging with the community.

Stewart says that the mentoring program, which is supported by grants from local foundations, was created by people who wanted to support the teachers in Baltimore.

“There can be a lot of frustration among this group, especially [with] the way the arts are supported,” Stewart says. “So there was this perceived need, and Peabody stepped in to provide the support these teachers needed. Our main goal hasn’t changed. We are trying to be involved with the Baltimore community as much as possible.”

Trahey says that teachers in the mentoring program helped him pick the inaugural students in the Tuned-In program, which has worked with two dozen students since its founding in 2007.

“In order for us to have success with our Tuned-In program, our mentoring program needs to be strong,” Trahey says. “There is a lot of crossover here. We’re not going to find these kids if we’re not in the schools or they are not getting proper musical instruction.”

Trahey says that he foresees a day when a teenager with whom he had worked directly or indirectly through the mentoring and Tuned-In programs auditions for admission to Peabody. In fact, he’s counting on it.