Unraveling the physics of cancer

Researchers from the Johns Hopkins Institute for NanoBioTechnology have been awarded a $14.8 million grant to research the spread of cancer 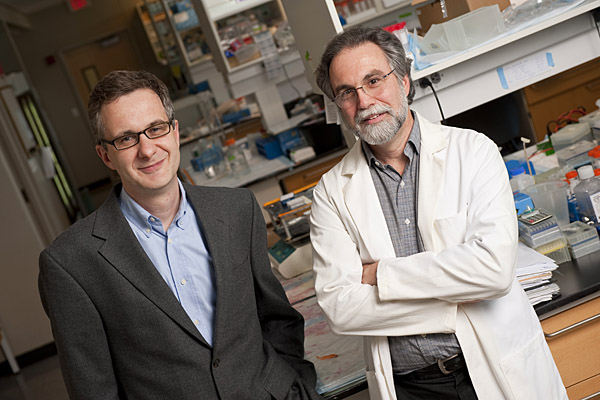 The Johns Hopkins Engineering in Oncology Center at INBT will be headed by Denis Wirtz, left. Gregg Semenza will serve as associate director.

Researchers from the Johns Hopkins Institute for NanoBioTechnology have been awarded a $14.8 million grant from the National Cancer Institute to launch a research center aimed at unraveling the physical underpinnings that drive the growth and spread of cancer. The new Johns Hopkins Engineering in Oncology Center at INBT includes 11 Johns Hopkins faculty members affiliated with the INBT and four investigators from partner universities. The project’s participants say that they hope this new line of research will lead to never-before-considered approaches to cancer therapy and diagnostics.

The Johns Hopkins center is one of 12 being launched by the National Cancer Institute to bring a new cadre of theoretical physicists, mathematicians, chemists and engineers to the study of cancer. During the five-year initiative, the NCI’s Physical Sciences–Oncology Centers will take new, nontraditional approaches to cancer research by studying the physical laws and principles of cancer; evolution and evolutionary theory of cancer; information coding, decoding, transfer and translation in cancer; and ways to deconvolute cancer’s complexity.

“By bringing a fresh set of eyes to the study of cancer, these new centers have great potential to advance, and sometimes challenge, accepted theories about cancer and its supportive microenvironment,” said NCI Director John E. Niederhuber. “Physical scientists think in terms of time, space, pressure, heat and evolution in ways that we hope will lead to new understandings of the multitude of forces that govern cancer, and with that understanding, we hope to develop new and

The NCI, which is an agency of the National Institutes of Health, will allocate the Johns Hopkins–based Engineering in Oncology Center’s funding over five years. As the name of the center suggests, the researchers will look at how physical sciences play a role in the way cancer spreads, commonly called metastasis.

Denis Wirtz, a professor of chemical and biomolecular engineering in the Whiting School of Engineering, will direct the center, and Gregg L. Semenza, a leading researcher at the School of Medicine, will serve as associate director.

“Metastasis is a highly coordinated, multistep process,” Wirtz said. “Cancer cells break free from a primary tumor, penetrate into the bloodstream, evade host defenses, stick to the interior walls of blood vessels and travel to other organs, where they set up new cancer cell colonies. During this cascade of events, tumor cells push on and are pushed by mechanical forces within their microenvironment. Cells translate those mechanical forces into biochemical signals that affect cell growth and function. If we can gain a better understanding of this process, we may find new and better ways to treat cancer.”

Wirtz, who is principal investigator, also serves as associate director of the university’s Institute for NanoBioTechnology, a cross-divisional institute launched in May 2006 with 185 Johns Hopkins faculty members who are using nanoscience to answer questions in medicine, the basic sciences and public health.

The new cancer center will similarly draw on Johns Hopkins researchers with diverse expertise to study the role of physical forces involved in the development and spread of cancer.

“Mechanical forces inside the body, such as shear exerted by blood flowing through blood vessels, typically destroy the millions of cancer cells that are constantly shed from tumors,” Wirtz said. “But the ‘fittest’ of cancer cells survive these Darwinian-like selective pressures and may become the culprits that spread cancer. Little is known about the effect of mechanical forces on the regulation of cancer cell growth. That is what the Engineering in Oncology Center and the National Cancer Institute want to find out. The results should point us to therapies and diagnostic tools that complement existing genetic or molecular treatments.”

In a congratulatory letter to Wirtz concerning the new center, Johns Hopkins President Ronald J. Daniels wrote, “This is a terrific achievement that highlights the value of interdisciplinary research and collaboration across the university, and the increasing importance this approach will have in the coming years. I am especially proud to see Johns Hopkins lead the way in this manner. … Not only will you be embarking into a new realm of scientific collaboration, you will be, at the same time, establishing Johns Hopkins as a leading center of excellence in this field. The ongoing fight against cancer demands new ideas, perspectives and approaches, and that is precisely what you are creating in [this] center.”

Semenza, the associate director, is affiliated with the School of Medicine’s departments of Pediatrics, Medicine, Oncology and Radiation Oncology, and the McKusick-Nathans Institute of Genetic Medicine. He is the C. Michael Armstrong Professor in Medicine and founding director of the Vascular Program at the school’s Institute for Cell Engineering. He also has ties to the School of Medicine’s Department of Biological Chemistry and to the Sidney Kimmel Comprehensive Cancer Center at Johns Hopkins.

Semenza and Sharon Gerecht, an assistant professor of chemical and biomolecular engineering, will lead one of the center’s three key research projects related to how cancer spreads. They will focus on analyzing the makeup and physical properties of the extracellular matrix, the three-dimensional scaffold in which cells live.

“Normal cells live in a flexible scaffold, but cancer cells create a rigid scaffold that they climb through to invade normal tissue,” Semenza said. “We will study how this change occurs and how it is affected by the amount of oxygen to which cancer cells are exposed. Our studies have shown that cancer cells are deprived of oxygen, which incites them to more aggressively invade the surrounding normal tissues where oxygen is more plentiful. Hypoxia-inducible factor 1 controls the responses of cancer cells to low oxygen, and we have recently identified drugs that block the action of HIF-1 and inhibit tumor growth in experimental cancer models.”

The center’s second key research project teams Wirtz with Greg D. Longmore, a cancer cell biologist at Washington University in St. Louis. The two will study the physical basis for cancer cell adhesion and de-adhesion and how it increases the likelihood that cancer cells will break free, move into the bloodstream and migrate to other tissues. “Cancer cells are able to modulate proteins on the surface almost like a protein ‘brake’ that allows them to adhere or de-adhere in response to mechanical forces,” Wirtz said.

The center’s third primary research project will be led by Konstantinos Konstantopoulos, professor and chair of the Whiting School’s Department of Chemical and Biomolecular Engineering, and Martin L. Pomper, who holds appointments in the School of Medicine’s Department of Radiology and the Kimmel Cancer Center. These two researchers will investigate the effects of fluid mechanical forces at different oxygen tension microenvironments on tumor cell signaling, adhesion and migration.

“Fluid flow in and around tumor tissue modulates the mechanical microenvironment, including the forces acting on the cell surface and the tethering force on cell-substrate connections,” Konstantopoulos said. “Cells in the interior of a tumor mass experience a lower oxygen tension microenvironment and lower fluid velocities than those at the edges in proximity with a functional blood vessel, and are prompted to produce different biochemical signals. These differential responses affect tumor cell fate—that is, whether a cell will live or die, and whether it will be able to detach and migrate to secondary sites in the body.”

All three projects will combine experimental and computational/theoretical results to develop a better picture of how these mechanical forces influence cancer metastasis.

In addition to the research component, the Engineering in Oncology Center will have a multidisciplinary training program for predoctoral students and postdoctoral fellows. The training program will be co-directed by Peter Searson, INBT’s director and the Joseph R. and Lynn C. Reynolds Professor in the Department of Materials Science and Engineering, and the School of Medicine’s Kenneth W. Kinzler, who is among the world’s most-cited cancer biologists and who serves as co-director of the Johns Hopkins Ludwig Center.

The center will incorporate two dedicated research facilities, also known as cores. The EOC Imaging Core will be established under the existing Integrated Imaging Center on the Homewood campus. J. Michael McCaffery, associate research professor of biology in the Krieger School of Arts and Sciences, will oversee the Imaging Core and facilitate imaging resources for EOC faculty. Searson will oversee the EOC Microfabrication Core, which will assist researchers in making the needed materials and devices for their experiments.

The Engineering in Oncology Center will be administered by the Institute for NanoBioTechnology, located on the Homewood campus, where research will occur in renovated laboratory facilities. Training and collaboration with investigators located at the four other research universities on the grant will occur through periodic onsite visits and via Web-based platforms.