The Estelle Dennis Dance Scholarship Program for Boys, which debuted in September, is open to those who live in Baltimore City or County. 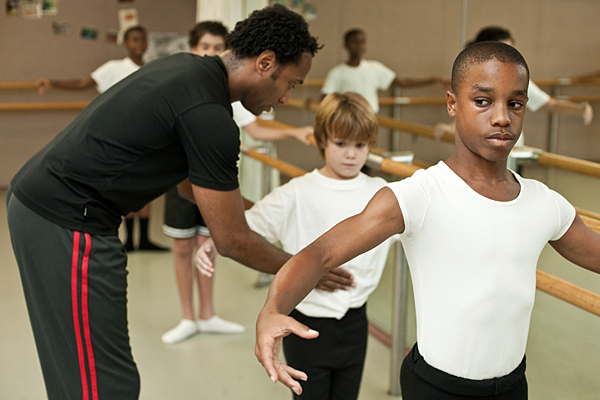 “There is a big void in male student enrollment in local training programs,” Bart­lett says, “and we figured that we needed to create a new incentive for local boys to study ballet.”

In an effort to encourage boys to pursue dance and the arts, Peabody Dance approached the Estelle Dennis Trust Fund this past spring to support the launching of a scholarship program that allows boys ages 9 to 15 to study at the Preparatory one day a week. The Estelle Dennis Dance Scholarship Program for Boys, which debuted in September, is open to those who live in Baltimore City or County.

In its efforts to reach out to the dance community, Peabody Dance offers master classes and teachers’ seminars on an annual basis. About a dozen of these boys will participate in Peabody’s ninth annual Day of Master Classes and Ballet Teachers’ Seminar from 9 a.m. to 5:30 p.m. on Sunday, Nov. 8, in the dance studios of the Peabody Preparatory’s Mount Vernon campus. This year’s seminar includes a new session called Training the Male Student.

The new scholarship program draws inspiration from the 2000 movie Billy Elliot, which was later turned into a Tony Award–winning musical. Billy Elliot is the story of an 11-year-old boy from a working-class British family who discovers a passion for dance. On his way to boxing lessons, Billy stumbles upon a ballet class that he later secretly joins. Under the guidance of his teacher, Billy’s raw talent takes flight.

Bartlett says that the program similarly wants to awaken talents in these Baltimore boys.

The program focuses on ballet, recognized as the building block for all theatrical dance forms. Participants are also introduced to other forms of dance, such as contemporary and hip-hop. In addition to classes, the boys attend dance performances and visit with professional dancers, both active and retired.

The Peabody program builds upon the Estelle Dennis Dance Scholarship, established in 2005 with the intent of continuing the work and legacy of the local dance legend. The scholarship is awarded to an advanced male ballet student who resides in the mid-Atlantic region and is preparing for a career with a major ballet company. Peabody hosts the annual auditions.

A leader in the contemporary American dance scene, Estelle Dennis dedicated her life and career to creating training and performance opportunities for young dancers in both the amateur and professional arenas.

In 1934, the Roland Park native and former Denishawn dancer opened her Dance Theatre in a converted carriage house at 100 E. Monument St. in Baltimore. The Estelle Dennis Dance Group blended modern dance and ballet choreography with ethnic music and dance traditions, creating an entirely new American style. Dennis remained active at the Dance Theatre until 1986. She died in 1996 at the age of 87.

This past April, Bartlett, artistic adviser Barbara Weisberger and others at Peabody approached those overseeing the Estelle Dennis Trust Fund to support an effort to establish a dance program for boys at Peabody. The response was enthusiastic.

To help recruit the boys, Peabody reached out to leaders at Baltimore City and County public schools and at various cultural organizations, including the Heritage Theater Artists and the Arena Players Youth Theater.

Peabody held a marathon set of auditions on May 18 at Roland Park Elementary and Middle School, Mount Royal School and Peabody. The sessions drew nearly 60 applicants. Twenty-four were selected.

“The response was magnificent and a real energy booster to the Peabody team,” Bart­lett says. “I don’t think Barbara and I will ever forget that day of effervescent human response. We wanted to take them all, and it was as if they could not get enough of the opportunity to move. It truly was a testimony to the obvious need out here for a much more driven focus on dance training.”

Weisberger, founding artistic director of the Pennsylvania Ballet, says that the auditions were a revelation.

“[The boys] were so joyous and excited,” Weisberger says. “Some of them could hardly do some of the steps and positions, but they laughed and enjoyed it. Then we had them do their own thing, and they were marvelous. You could just see the raw talent that wanted to come to the surface.”

Bartlett says that in addition to designing and implementing the program, Peabody seeks to nurture the boys and families on a one-to-one basis.

“In offering this opportunity for city and county boys to study ballet, we realize that much more is at issue than merely asking them to step over to a classical art form that on the surface is not exactly relevant to their daily lives or culture,” she says. “The effort to make it relevant to them is equally, if not more, a challenge than the actual training.”

Bartlett and Weisberger are now in the process of writing a proposal seeking funding to extend the scholarship program. The plan is to add an intensive training program for the boys currently in the program, as well as to offer classes for new recruits and begin a class focused on boys ages 8 to 10.

“There is obviously a need to offer more,” she says. “It’s not enough to whet their appetites with one class per week. We need to keep their interest peaked and find ways to give context to serious dance training in their lives.”

Weisberger agrees that Peabody needs to build upon the early momentum.

“For too long we have been faced with the loss of serious male students in all dance forms,” Weisberger says. “This program has caught on, and it’s nothing short of life giving.”

The next auditions will take place in late spring 2010.