A dog’s nose, with its thousands of olfactory receptors, is one of the best chemical detection “sniffers” in military and police circles. 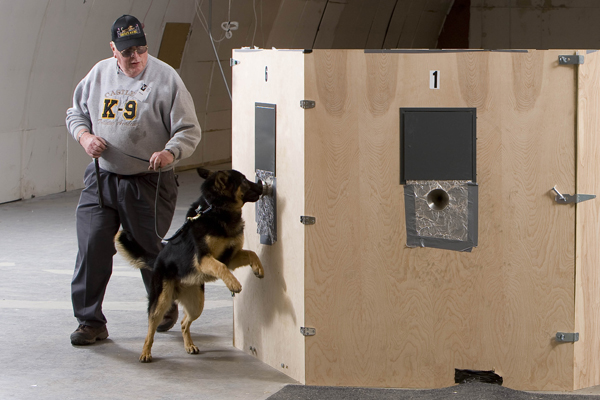 Bill Castle, dog handler and owner of Castle's K9, takes Ares on a search for the target compound at the APl test center

A dog’s nose, with its thousands of olfactory receptors, is one of the best chemical detection “sniffers” in military and police circles. That’s why a Homeland Protection Business Area team at Johns Hopkins’ Applied Physics Laboratory is working with the Defense Advanced Research Projects Agency on its RealNose program, which aims to construct a sensor that would operate like—and as well as—a dog’s nose. The sensor will eventually be integrated into a system that could simultaneously detect more than 20 chemicals.

The team recently completed the first part of the project: determining the limits of canine detection for a variety of nontoxic, nonhazardous chemicals, compounds and odorants that dogs would normally search for in the field or when training. The tests, conducted in April in APL’s Building 42, included five dogs provided by Castle’s K9, a law-enforcement canine training firm in Pennsylvania. Trang Vu, of APL’s National Security Technology Department, or NSTD, called on her Customs and Border Protection canine program experience to develop training aids and protocols for the tests.

The team, led by Mike Wagner and Matt Schroeder of NSTD, built a vapor generation and control system that produced a variety of scents at various concentrations. Ten compounds were tested to determine how little of each compound the dogs could recognize. The test equipment was housed behind a six-sided structure with a cone on each wall, through which each vapor was sent one at a time. Starting at random locations around the structure, a handler would allow a dog to walk around it, no more than twice, and sniff each cone. When a dog correctly detected the target scent, the team recorded the concentration and the handler rewarded the dog.

The DARPA-specified chemicals used in the test included cyclohexanone, a residual (nonexplosive) solvent found in the plastic explosive C4; methyl benzoate, a product broken down in cocaine that’s often used as a training aid for drug-sniffing dogs; ethyl vanillin, an artificial vanilla; limonene, often found in cleaning solvents; and amyl acetate, which smells like bananas.

Although Ares, Max, Kika, Murphy and Nellie may have initially looked and acted like ordinary family pets, the team realized that the command “Find it!” turned the dogs into focused, hard-working searchers.

“Dogs are very adept at picking out odor amongst a lot of clutter or confounders,” said Wagner, APL’s RealNose program manager. “During our tests we could see the dogs constantly learning and getting better at detection. As cognitive beings, they think, learn and cheat if they can to get their reward, but our tests were designed to keep things random and prevent them from cheating.”

Having determined the detection limits and evaluation standards for the next test phase, the team is now building and characterizing the RealNose test equipment and structure in a Building 12 aerosol chamber. The team will evaluate the noselike sensors being developed by other organizations to see if their measurements are as good as the canines’. Tests began this summer and will wrap up by the end of the year.

Phase two of the project, which starts in 2010, will require the sensors to detect odorants masked in multiple chemicals and possibly aerosols. “If things continue successfully,” Wagner said, “the end goal is to wrap up with a prototype device by 2012 that could be transitioned to industry and used anywhere you could use a dog or in areas that might be too dangerous for one, such as searching rubble after an earthquake if toxic chemicals are present.”

The potential uses of these sensors are wide-ranging, Wagner said. It might someday be possible to fly olfactory receptors on an unmanned aerial vehicle to detect chemical agents associated with weapons of mass destruction—a mission impossible for even the keenest four-legged agent.