Seeing tumors in a new light 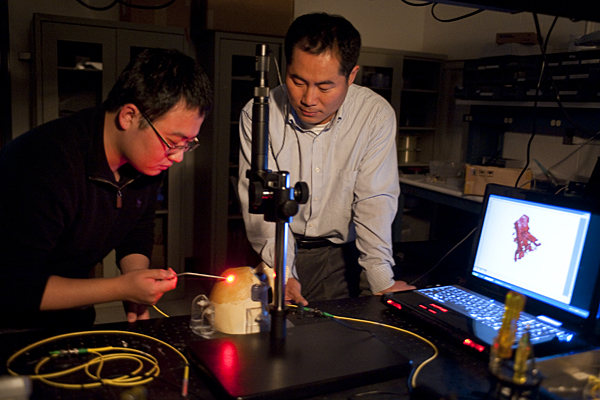 Jin U. Kang, standing, and doctoral student Kang Zhang work with a prototype of an optical tool for ‘virtual’ biopsies. Photo Courtesy: Will Kirk, HomewoodPhoto.jhu.edu

Read about more research that is being conducted at JHU with funding from the American Recovery & Reinvestment Act.

More precisely, Kang is building a tool to help brain surgeons locate and get a clear look at cancerous tissue. In some cases, Kang says, this device could eliminate the need to cut into the brain for a traditional biopsy, a procedure that can pose risks to the patient.

“The idea,” he says, “is to provide instant high-resolution pictures of a small segment of the brain without actually touching the tissue. These pictures could let the doctor conduct a ‘virtual biopsy’ to see where the tumor is and whether it is benign or malignant. And when it’s time to cut out the cancer, these images could help a surgeon see and avoid healthy tissue.”

Kang’s concept recently received a financial boost that should help move it from the drawing board to the operating room. He was awarded $450,000 in federal stimulus package funds to develop the technology for this new high-tech surgical instrument. The two-year grant has been provided by the Institute of Neurological Disorders and Stroke, an agency of the National Institutes of Health.

The Johns Hopkins professor asked the institute for funding last year. His proposal was well reviewed, Kang says, but available funds were exhausted by other applicants. When the federal stimulus package provided more money to the institute earlier this year, Kang’s surgical instrument proposal was funded. “If it weren’t for the stimulus money, we probably would not have been able to go ahead with this for at least another year,” he says. “This has moved the project forward, and for that I’m grateful.”

Kang’s team has made great strides in refining the technology, but the surgical tool has not yet been tried out on human patients. The federal grant will enable the researchers to begin animal and human cadaver testing in the coming months. Human patient trials could begin within five years.

To help bring his new technology to hospitals, Kang, who is a professor and chair of the Department of Electrical and Computer Engineering in the Whiting School of Engineering, is collaborating with neurosurgeons in the School of Medicine and with Russell Taylor, who is a professor of computer science and director of the Johns Hopkins–based National Science Foundation Engineering Research Center for Computer-Integrated Surgical Systems and Technology.

Kang’s brain imaging design has already generated praise among those who might one day use it in the frontlines of their work: neurosurgeons.

“This instrument would help us perform a biopsy easily and safely, and guide us in removing tumors,” says George Jallo, a pediatric neurosurgeon at Johns Hopkins Children’s Center and an associate professor of neurosurgery at the School of Medicine. “The technology should allow us to distinguish between the tumor and the critical brain structures around it that we want to avoid, such as blood vessels and nerves.”

To give doctors this detailed view of brain tissue, Kang’s device employs ultra-thin optical fiber, the material used in long-distance communication systems, to direct harmless low-powered laser light onto the area the surgeon wants to examine. When the light strikes the tissue, most of it bounces away in a scattered, incoherent manner. But, by means of a technique called optical coherence tomography, the small portion of light that is scattered back can be collected and used to construct a high-resolution three-dimensional picture of the tissue, down to the cellular level. These images are significantly sharper than those produced by MRI or ultrasound equipment, Kang says, and should give surgeons a better look at the boundaries of a tumor and the presence of blood vessels and healthy tissue that must be preserved.

Yet, compared to the older, widely used imaging systems, the new technology is expected to be much less expensive, perhaps less than $10,000. “It’s a very simple and cost-effective system,” Kang says.

Kang’s project is supported by one of more than 300 stimulus-funded research grants totaling almost $150 million that Johns Hopkins has garnered since Congress passed the American Recovery and Revitalization Act of 2009 (informally known by the acronym ARRA), bestowing the National Institutes of Health and the National Science Foundation with $12.4 billion in extra money to underwrite research grants by September 2010. The stimulus package—which provided $550 billion in new spending, including the above grants, and $275 billion in tax relief—is part of President Barack Obama’s plan to kick-start a stagnant economy by doling out dollars for transportation projects, infrastructure building, the development of new energy sources and job creation, and financing research that will benefit humankind.

To date, 78 jobs have been created at Johns Hopkins directly from ARRA funding; in addition, positions have been saved when other grants ran out.

Kang joined the faculty of the Department of Electrical and Computer Engineering 11 years ago and has developed a number of novel fiber optic devices for sensors and communications. “My specialty now is the use of optical techniques in various medical devices and systems,” he says. In addition to the brain surgery instrument, he is collaborating with computer scientists at the university on a steady-hand tool that would allow physicians to conduct extremely delicate surgery on blood vessels in the retina of the eye.

This is part of an occasional series on Johns Hopkins research funded by the American Recovery and Revitalization Act of 2009. If you have a study you would like to be considered for inclusion, contact Lisa De Nike at lde@jhu.edu.

Department of Electrical and Computer Engineering: