‘The Social Network’ brings filmmaking and opportunities to campus 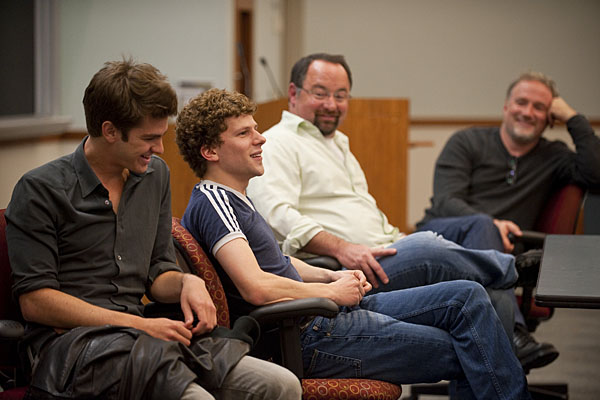 Film and Media Studies students and theater minors delighted in the opportunity last week to pick the brain of director David Fincher and other principal members of the upcoming major motion picture The Social Network. For two days, Johns Hopkins’ Homewood campus served as a shooting location for the Columbia Pictures film, which chronicles the founding of Facebook.

Fincher, director of photography Jeff Cronenweth and two of the film’s stars, Jesse Eisenberg and Andrew Garfield, made themselves available for a Q&A with the students on Tuesday afternoon at Hodson Hall. Veteran film director Fincher was recently nominated for an Academy Award as best director for The Curious Case of Benjamin Button. Cronenweth’s cinematography credits include the films Down with Love, One Hour Photo and Fight Club.

In the movie, Eisenberg stars as Facebook founder and CEO Mark Zuckerberg. Garfield plays the role of Eduardo Saverin, a co-founder of the popular social networking Web site. Eisenberg is best known for his roles in The Squid and the Whale and Adventureland, and Garfield has a leading role in the upcoming Never Let Me Go.

In the Q&A session, the Hollywood visitors talked about subjects as varied as their approaches to acting and filmmaking, digital technology’s impact on film production, the arcs of their careers and the roles of a director and cinematographer in bringing a script to the screen.

A number of Johns Hopkins students—mostly from the Theatre Arts and Studies Program—were used as extras during the filming, which was done primarily outdoors and at night and was scheduled to minimize interference with normal activities in residence halls and on academic quads. Homewood stood in for Harvard University’s Cambridge, Mass., campus, where the Facebook story first unfolded.

The filmmakers often went to great lengths to cloak Homewood in crimson detail. For a scene shot at Shaffer Hall, the crew redressed the building’s directory to read “Harvard School of Engineering and Applied Sciences.” They also brought actual Harvard fliers to post, with references to facilities such as Emerson Hall.

Dennis O’Shea, executive director of Communications and Public Affairs for Johns Hopkins, said that the director’s attention to detail, including every physical object and every source of light visible in a single shot, was incredible.

“I think everyone will be really happy when they see how Homewood looks on film. I think we’ve got a great shot at an Oscar for best campus,” he said.

The film crew departed on Wednesday. The movie will be released sometime in 2010.