Family, friends and hundreds of members of the Johns Hopkins University community turned out to memorialize and celebrate the life of Miriam Frankl 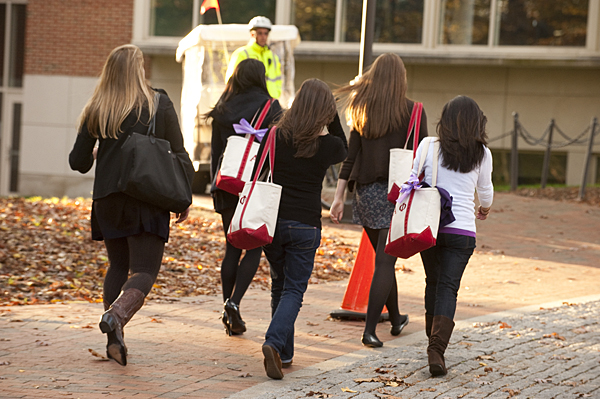 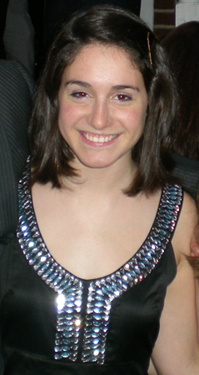 Family, friends and hundreds of members of the Johns Hopkins University community filled the gymnasium of Homewood’s Ralph S. O’Connor Recreation Center on Tuesday afternoon to memorialize and celebrate the life of Miriam Frankl, a vivacious, confident and bright young woman who clearly captivated many.

Frankl, a 20-year-old junior in the School of Arts and Sciences, died on Oct. 17 from injuries sustained in a hit-and-run accident the previous afternoon. Her tragic passing stunned a campus community, which is still in mourning.

Those gathered at the quiet and deeply somber service came to remember, or learn of, Frankl’s quick mind, energetic spirit, kind heart and her love of scarves, science, the Spanish language and Funfetti cupcakes.

Frankl, from Wilmette, Ill., was a molecular and cellular biology and Spanish major who was helping conduct ALS research in the School of Medicine’s Department of Neurology. She was the third generation of women in her family to be part of the university’s East Baltimore campus community. Her aunt Rebecca Z. German is a professor in the School of Medicine, and her grandmother Pearl S. German is a professor emerita in the Bloomberg School of Public Health.

In addition to her studies, Frankl was deeply involved with her sorority, Alpha Phi, and her work at the university’s Career Center.

Rev. Albert Mosley, university chaplain, began the program with a short prayer and asked the assembly to “reflect on a life filled with life.” 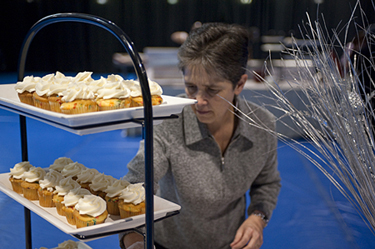 In the front rows sat members of Frankl’s family; her boyfriend, Michael Fellows, a junior majoring in East Asian studies; and her sorority sisters, many of whom wore matching white sweaters and purple ribbons. The AllNighters, an a cappella group of which Fellows is a member, provided musical interludes at the service, including a haunting rendition of Leonard Cohen’s “Hallelujah.”

Provost Lloyd B. Minor—who spoke on behalf of President Ronald J. Daniels, still recovering from major surgery—said that today Johns Hopkins shared a bond and collectively grieved a promising life that ended much too soon.

The AllNighters, who sang at Frankl’s memorial service, gather beforehand outside the O’Connor Recreation Center Photo: Will Kirk/homewoodphoto.jhu.edu

“This afternoon, as a community, we are here to remember Miriam. But we’re also here to be reminded of one another,” Minor said. “The shock, the disbelief, the anger we feel can at times seem too much to bear. This is when family counts the most. Today, all of Johns Hopkins is a family.”

Frankl was described as a “connector,” someone who brought ideas and people together. She used that ability as a recruiter for her sorority and the work she did at the Career Center.

Friends described her as fun, dynamic, spunky, confident, charismatic and genuine. Her personality and confidence, they said, were addicting. She could put on her favorite midnight blue nail polish and let her hair down one moment, but just as easily organize a study trip to the library the next.

Anne Griffioen, a junior public health studies major and close friend of Frankl’s, said that when Frankl agreed to live with her this year, it felt as if she had won the jackpot.

“Miriam was so focused on success and still so dedicated to everyone and everything she cared about,” Griffioen said. “I couldn’t wait to live with this girl who was going places. Just being in her presence—among her easy confidence in herself and her goals—made me feel like I could go places, too.”

Frankl began her work in the Department of Neurology this past January, focusing on the pathogenic mechanisms of ALS, or Lou Gehrig’s disease, in the lab of Jeffrey Rothstein. She came to the lab two to three times a week, primarily preparing brain tissue samples for slides.

Her supervisors said that Frankl was the kind of student every faculty member would love to recruit. They called her a natural who brought a fresh enthusiasm to her work.

“She was very intelligent and open-minded, and she loved science very much,” said Yongjie Yang, a research fellow and one of Frankl’s lab supervisors. “She wanted to know why we did things and how they would help us achieve our goals. But she was more than just a lab partner; she was a friend to all of us.”

Frankl loved to travel and was greatly impacted by a 2006 trip to Israel and a recent trip to Spain.

Rebecca German, who spoke at the podium, said that her niece was fearless, bold and knew what she wanted from an early age. German recalled how her niece took charge of her college application process and, after much deliberation, made Johns Hopkins her first choice.

“Knowing where she was going, and how she was going to get there, was always a part of her life,” German said. “Miriam knew what she wanted.”

Fighting back tears, German told those gathered that today was a day to mourn two people: the Miriam who was, and the accomplished woman she would have grown up to be. “Miriam was a remarkable human being, and we will never know all of what she could become,” she said.

Following the ceremony, most of the crowd headed to tables in the back of the gymnasium that were covered with Funfetti cupcakes and napkins.

Several used the napkins to dry their eyes as they slowly walked out into the early evening. One student, her eyes red and still streaming tears, bit into her cupcake, smiled and let out a tiny laugh. “Miriam would have loved these,” she said. Her friend hugged her and nodded in agreement.

Memorial contributions in Frankl’s name may be made to the Beth Emet Congregation Soup Kitchen at 1224 W. Dempster St., Evanston, IL 60202 or to the Greater Chicago Food Depository at 4100 W. Ann Lurie Place, Chicago, IL 60632.