The Center for Africana Studies is hosting its second artist in residence, photographer and multimedia artist Hank Willis Thomas 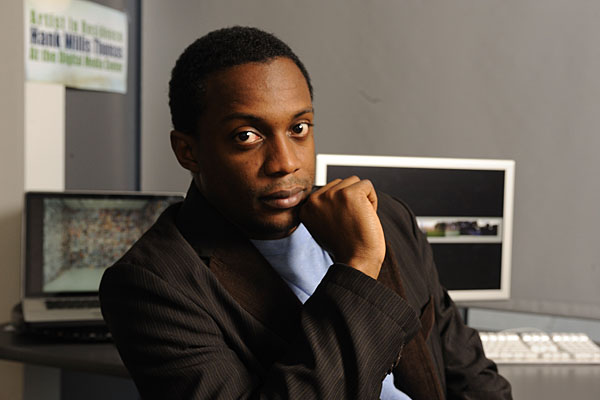 This month, the Center for Africana Studies at Johns Hopkins is hosting its second artist in residence, photographer and multimedia artist Hank Willis Thomas, who is collaborating with students and staff in the Digital Media Center on the Homewood campus.

“The Digital Media Center’s staff is pretty versatile, and we’re working on some different ideas,” Thomas said. “We’re interested in working with digital video cameras and technology to challenge the perception and the notion of truth, and that’s pretty exciting.”

Thomas, who is based in New York, will speak about his work during an artist’s conversation at the Baltimore Museum of Art at 6 p.m. on Thursday, Nov. 12. The free event takes place in conjunction with an exhibition through Nov. 29 at the BMA—Thomas’ first major solo show at a museum—showcasing 10 of his recent works exploring racial stereotypes and black identity in America.

The BMA’s Web site describes Thomas as “a rising star in the art world.” He holds master’s degrees in photography and visual criticism from the California College of the Arts and earned his bachelor’s degree in photography and Africana Studies from New York University’s Tisch School of the Arts. Thomas was the winner of the first Aperture West Book Prize for his monograph Pitch Blackness (November 2008), and his work was featured in the exhibition and accompanying catalog 25 under 25: Up-and-Coming American Photographers.

Thomas uses the language of advertising and pop culture to talk about issues related to race and sometimes gender. In addition to shooting his own photos or videos, Thomas appropriates others’ images and digitally manipulates them for results that a camera alone couldn’t achieve. An example is his Unbranded series, in which he used images taken from magazine advertisements targeting a black audience or featuring black subjects and digitally removed all the logos and text in order to emphasize the advertising industry’s reinforcement of generalizations about race and ethnicity. (Much of Thomas’ portfolio can be seen online at http://hankwillisthomas.com.)

This fall, Thomas and several students are shooting 360-degree landscape videos as well as conducting woman-or-man-on-the-street-style on-camera interviews, focusing on questions about identity and notions of truth.

“The question we’ve all been asking is, Tell me the one thing you know is true,” Thomas said. “Or, fill in the blank: The truth is, I blank you. The idea is just to collaborate and do something we haven’t done before, and getting strangers to open up to thinking about something they normally wouldn’t in front of a camera.”

Joan Freedman, director of the Digital Media Center, said the DMC is a natural creative home base for Thomas’ monthlong residency.

“This is a great opportunity for the students who use the center to observe and to work with a digital artist,” Freedman said. “We started to talk about possible projects that the students might be interested in back in the summer and looked for areas of overlap between Hank’s current work and the expertise the students had to share.”

Freedman said that they found themselves drawn to the truth is … video project, which hadn’t really taken shape until Thomas came to Johns Hopkins. “Milt Reder and Jimmy Joe Roche are two DMC professional staff working with Hank and the students to test methods of videotaping short interviews with multiple cameras mounted in a circle on a stand,” Freedman said. “The students are exploring techniques of editing and overlapping the videos to create an immersive installation.”

Thomas plans to be in Baltimore three to four days a week for the month of November. “I’ve spoken to about five different classes here, and I will probably have a chance to interact with another five or six classes this month. So far, it has been a really great experience.”

The Center for Africana Studies this past spring welcomed visual artist Renee Stout as its first artist in residence. The residencies are the result of an idea hatched in fall 2006 by a group of Africana Studies faculty drawn from throughout the Krieger School of Arts and Sciences. The idea was to bring to campus nationally known artists who could address the representation of race through imagery, according to Ben Vinson, director of the center. A donation by alumna Christina Mattin made the two-semester program possible.