Goal: Find out if diet and exercise affect cardiovascular health

Are strategies for battling obesity and diabetes also effective in preserving a healthy heart? 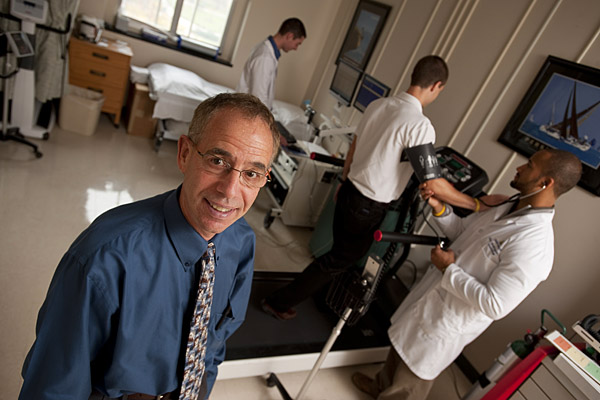 Kerry Stewart and his team are embarking on two studies addressing some of the nation’s biggest health problems: obesity, diabetes and cardiovascular health. Photo: Will Kirk

Everyone knows that a healthy diet and adequate exercise are effective weapons in the battle against obesity and type 2 diabetes.

But do such regimens have the same positive impact on our cardiovascular system? People assume so and scientists think so, but—perhaps surprisingly—they don’t know for certain.

“People are surprised when they hear that there really is very little data on the topic of whether diet and exercise, which are already recommended for treating obesity and diabetes, will also benefit cardiovascular health,” said Kerry Stewart, a professor of medicine in the Johns Hopkins University School of Medicine and director of Clinical and Research Exercise Physiology at Johns Hopkins Bayview Medical Center. “The evidence that exercise and a healthy diet in people with these conditions help the cardiovascular system is just not in yet.”

In an effort to pin down the facts, Stewart and his team are embarking on two studies investigating whether the cardiovascular health of people who either have diabetes or are at risk of developing diabetes because they are overweight and sedentary shows improvement after the adoption of a healthy diet and exercise regimen. The cost of the studies—about $1.5 million for each—is underwritten by the federal stimulus package through the National Institutes of Health.

“These two projects address some of our nation’s biggest public health problems: obesity, diabetes and cardiovascular health,” said Stewart, who recently presented groundbreaking data that revealed, among other things, that weekly bouts of moderate aerobic exercise on a bike or treadmill, or a brisk walk, combined with some weightlifting may cut down levels of fat in the liver by up to 40 percent in people with type 2 diabetes.

Stewart’s investigations are among the more than 300 stimulus-funded research grants totaling more than $148 million that Johns Hopkins has garnered since Congress passed the American Recovery and Revitalization Act of 2009 (informally known by the acronym ARRA), bestowing the National Institutes of Health and the National Science Foundation with $12.4 billion in extra money to underwrite research grants by September 2010. The stimulus package—which provided $550 billion in new spending, including the above grants, and $275 billion in tax relief—is part of President Barack Obama’s plan to kick-start a stagnant economy by doling out dollars for transportation projects, infrastructure building, the development of new energy sources and job creation, and financing research that will benefit humankind.

As of this month, Johns Hopkins scientists have submitted nearly 1,300 proposals for stimulus-funded investigations ranging from strategies to help recovering addicts stay sober and the role that certain proteins play in the development of muscular dystrophy to mouse studies seeking to understand how men and women differ in their response to the influenza virus.

Stewart’s studies, each of which will last six months, will examine the cardiovascular effects of exercise and diet on overweight and obese people with type 2 diabetes or at risk for developing diabetes, and on people with abdominal obesity, which puts them at a higher-than-average risk of several early markers for cardiovascular disease, including endothelial function, arterial stiffness and dysfunction of the heart’s ability to fill with blood. The first study will enroll about 76 participants and will ascertain whether a diet alone or a diet plus exercise has a more positive impact on cardiovascular health. The second study will enroll the same number of subjects and will compare whether a low-carbohydrate diet plus exercise is better for cardiovascular health than is a low-calorie, low-fat diet plus exercise.

“We expect our subjects to become more fit, lose weight and lower their blood sugar,” Stewart said. “What we don’t know is if these changes will also lead to improved cardiovascular health and ultimately—and this is key—the prevention of cardiovascular disease. If our results are positive, this would provide further and convincing evidence about the role of diet and exercise as a vital pathway to heart health.”

This is part of an occasional series on Johns Hopkins research funded by the American Recovery and Revitalization Act of 2009. If you have a study you would like to be considered for inclusion, contact Lisa De Nike at lde@jhu .edu.