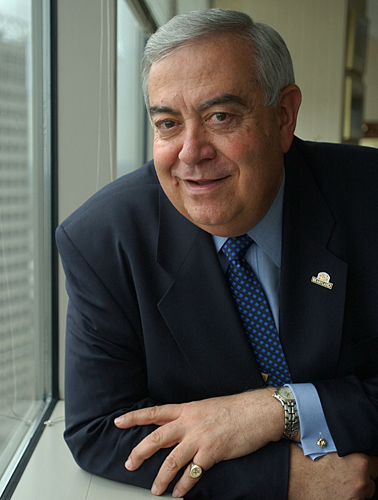 Johns Hopkins considers itself a world leader in knowledge creation. In the past two years, the university has done a good deal of business creation, too.

Aris Melissaratos, senior adviser to the president for enterprise development at Johns Hopkins since February 2007, said that from day one he’s been trying to change the culture here and make the university more entrepreneurial.

When he arrived, Melissaratos said, he encountered a faculty population that was somewhat adverse to self-promotion and the business side of technology creation.

“Commercialization had almost become a dirty word, and the prevailing thought was let’s not do anything to rock the research boat,” said Melissaratos, former secretary of Maryland’s Department of Business and Economic Development. “What I’ve been preaching is let’s get back to our roots and our prime mission, which is knowledge for the world. In that sense, it’s OK to be a little mercenary. Let’s do whatever we can to get the technology out there so it can help the world, while we never forget our institutional foundation of research excellence.”

The efforts have paid off.

Johns Hopkins in fiscal year 2008 spawned a dozen startup companies, seven of them based in Maryland, that collectively raised $76 million. This fiscal year, Johns Hopkins has already formed 10 companies, several of them dealing with medical devices or therapeutics that help fight infectious diseases and cancer.

The 22 companies founded in the past two years almost double the number in the preceding seven years, when the average was four companies started annually, with a high of six.

In his role, Melissaratos supervises the university’s Technology Transfer Office, the intellectual property administration center that serves Johns Hopkins researchers and inventors as a licensing, patent and technology commercialization office.

The move forward started when the Technology Transfer Office adopted the motto “Johns Hopkins is open for business” and began to reach out aggressively to the business community in new and innovative ways. Just before Melissaratos arrived, the office helped launch the Vine and Venture Series, a quarterly series of after-business-hours talks now held at the Rangos Building of the Science + Technology Park at Johns Hopkins in East Baltimore. The talks feature representatives of major companies who come to speak with faculty and staff on how to partner with those in the pharmaceutical, biotechnology and medical technology communities.

In June, the Technology Transfer Office co-hosted an inaugural Johns Hopkins Medicine Entrepreneurial Speed-Dating event in an effort to connect Johns Hopkins inventor scientists with entrepreneurs experienced in starting businesses. Organizers felt that such an event could accelerate the formation of new life science companies. By all accounts the event was a tremendous success, and it will be held next year.

Melissaratos and others highlighted the recent boon of startups at the annual meeting of the Johns Hopkins Alliance for Science and Technology Development, which Melissaratos now chairs. The Alliance, founded in 2004, is a 40-member committee charged with evaluating the commercial viability of selected research projects at the university. Members of the Alliance—venture capitalists and research and development executives from the pharmaceutical and biotechnology industries—evaluate marketing opportunities and provide assistance with the identification of financing to enable the commercialization of worthy discoveries.

The meeting also featured updates on recent startups and a presentation by Barbara Slusher and Jeffrey Rothstein, faculty members in the School of Medicine’s Neurology Department, about the Brain Science Institute’s new NeuroTranslational Program. The program was created with the mission of identifying and creating new drug therapies for neurological disorders, based on JHU faculty research.

Melissaratos said that much has been accomplished over the past two years to transport the benefits of Johns Hopkins discovery to the world.

“In the past, we have been criticized in some quarters for not being commercial enough or getting good results, but we’re turning that around,” he said. “Universities like Stanford and MIT have a legacy of starting lots of companies. We’re catching up. Events like the Entrepreneurial Speed-Dating help get the word out that we are easy to do business with and have expertise in many areas.”

Melissaratos said that his office has also been training faculty to make more effective business presentations. Under the direction of Helen Montag, corporate relations manager, and with the volunteer help of Michael Rosen, senior vice president for new business development at Forest City Enterprises’ Science & Technology Group, a training program has helped more than 100 faculty and staff by coaching them on effective marketing pitches to attract potential investors. The results, he said, can be lucrative.

Technology transfer revenues have grown steadily from $9 million in fiscal year 2006 to $12.2 million in 2008. And Melissaratos said that he expects this growth to continue. He credits the leadership of Wesley Blakeslee, Technology Transfer executive director; Glen Steinbach, administrative director; Keith Baker, portfolio director; and a “superb” staff of licensing professionals.

Since 2000, 86 percent of the startup companies have been in the fields of therapeutics, medical devices and diagnostics. Melissaratos said he would like to expand technology transfer in the areas of information technology, engineering and the physical sciences. The “open for business” sign, he said, should be on everyone’s door.

For more information on the Technology Transfer Office, go to its new Web site at techtransfer.jhu.edu.