It turns out that wearing a cap is good for you, at least if you are a mammal cell. 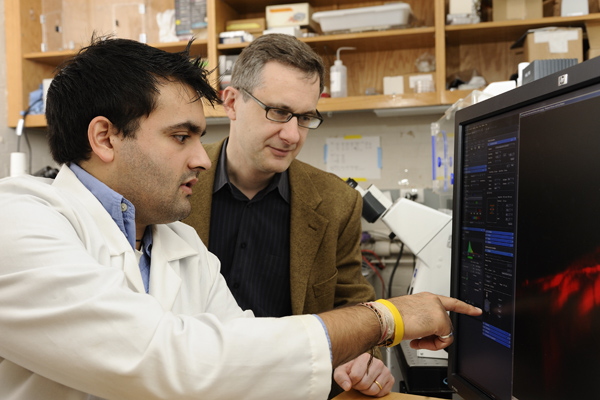 Shyam Khatau and Denis Wirtz played a key role in finding a bundled ‘cap’ of threadlike fibers that holds a cell’s nucleus in its proper place. Photo: Will Kirk/Homewoodphoto.jhu.edu

It turns out that wearing a cap is good for you, at least if you are a mammal cell.

Researchers from the Johns Hopkins Engineering in Oncology Center have shown that in healthy cells, a bundled “cap” of filaments holds the cell’s nucleus—its genetic storehouse—in its proper place. Understanding this cap’s influence on cell and nuclear shape, the researchers said, could provide clues to the diagnosis and treatment of diseases such as cancer, muscular dystrophy and the age-accelerating condition known as progeria.

“Under a microscope, the nucleus of a sick cell appears to bulge toward the top, while the nucleus of a healthy cell appears as a flattened disk that clings to the base,” said principal investigator Denis Wirtz, professor of chemical and biomolecular engineering and director of the Engineering in Oncology Center. “If we can figure out how and why this shape-changing occurs, we may learn how to detect, treat or perhaps even prevent some serious medical disorders.”

Scientists have known that misshapen nuclei are an indicator of disease, Wirtz said, but they were not certain how a cell controlled the shape of its nucleus—the structure in mammal cells where genetic material resides. However, in a study published in the Nov. 10 issue of the Proceedings of the National Academy of Sciences, the research team led by Wirtz reported  the discovery of a fibrous structure that holds the nucleus in its place. The researchers call this new network structure the perinuclear actin cap.

“In healthy cells, the perinuclear actin cap is a domed structure of bundled filaments that sits above the nucleus, sort of like a net that is tethered all around to the perimeter of the cell membrane,” Wirtz said. This configuration pushes the nucleus down toward the base of the cell and also creates the distinctive flattened shape of normal cells.

Cells with cancer, muscular dystrophy or progeria lack this distinctive cap, allowing the nucleus to float upward toward the top of the cell’s membrane. These diseased cells may appear more rounded and bulbous.

The perinuclear actin cap was discovered while the team was trying to find out if cell shape controls nucleus shape. By growing cells on a surface with alternating sticky and nonsticky stripes, the researchers noticed that as cells grew along a sticky stripe, their nuclei elongated as well. Using a confocal microscope—a special kind of microscope that can view an object one “slice” at a time—doctoral student Shyam Khatau was able to reconstruct the cell in three dimensions. By stacking the confocal microscope images together, Khatau, who is affiliated with the Johns Hopkins Institute for NanoBioTechnology, was able to produce short movies showing the 3-D structure of the cells, the nucleus and the perinuclear actin cap. (The movies are online at http://inbt .jhu.edu/outreach/media-library/video.)

“That’s when we saw the cap,” Khatau said, “and Dr. Wirtz realized we were on to something.”

The cap’s role in disease became evident when Khatau tested cells without the gene to produce lamin A/C, a protein found in the membrane of the nucleus of normal cells but absent in the nuclear membrane of cells from people with muscular dystrophy. Cells without lamin A/C failed to produce the perinuclear actin cap.

“We next plan to study how the cap’s effect on the shape of the nucleus affects what genes the cells express,” Wirtz said.

Khatau, who is pursuing his doctorate in the Department of Chemical and Biomolecular Engineering, is lead author of the journal article. Additional Johns Hopkins authors on this paper are Wirtz; doctoral student Christopher M. Hale and senior Meet Patel, both from the Whiting School of Engineering’s Department of Chemical and Biomolecular Engineering; and Peter C. Searson, a professor in the school’s Department of Materials Science and Engineering. Other co-authors are P.J. Stewart-Hutchinson and Didier Hodzic, both of the School of Medicine at Washington University in St. Louis; and Colin L. Stewart, of the Institute of Medical Biology, Singapore.

This work was funded by the National Institutes of Health and the Muscular Dystrophy Association.

Department of Chemical and Biomolecular Engineering