A homecoming for historic windows 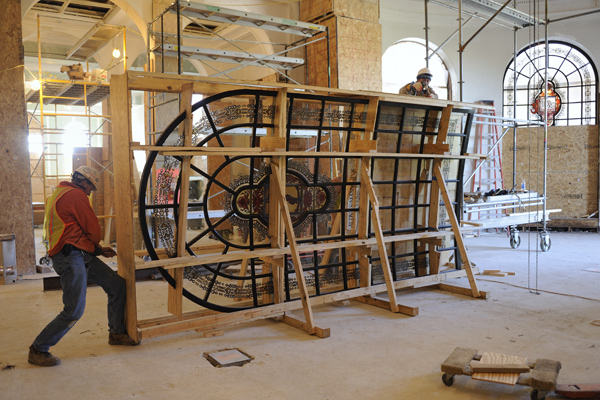 The windows in the Hutzler Undergraduate Reading Room display marks used by European printers from the 15th and 16th centuries. Photo: Will Kirk/Homewoodphoto.jhu.edu

As the massive renovation of Gilman Hall enters its final nine months, many of its historic glass treasures have returned with a pristine sparkle and luster.

The work was conducted off site at Worcester Eisenbrandt’s Baltimore workshop.

The Hut’s stained glass windows—the room’s defining feature—display the marks (logos) used by European printers from the 15th and 16th centuries, the dawn of the industry. Memorial Hall’s picture windows feature stained glass panels with seals of the institutions

at which Daniel Coit Gilman, the university’s first president and the building’s namesake, worked during his lifetime (Johns Hopkins, Yale, the University of California, Berkeley and the Carnegie Institution of Washington).

Worcester Eisenbrandt—which also handled the restoration of Baltimore’s Patterson Park Pagoda and Hippodrome Theatre—preserved as much of the original windows and frames as possible.

Future Memorial Hall and Hut visitors will see “a very noticeable difference” in the windows’ appearance, according to the restoration’s project manager, Todd Anderson. Sunlight will now shine clearly through the Hut’s windows thanks to new insulated exterior windows that feature clear laminated glass, which will also allow people to view the stained glass from the outside. Previously, the exterior windows had a Plexiglas layer that had weathered and yellowed to the extent that passersby couldn’t see through it.

Gilman Hall is scheduled to reopen for the fall 2010 semester.