Exploring schizophrenia at the molecular level 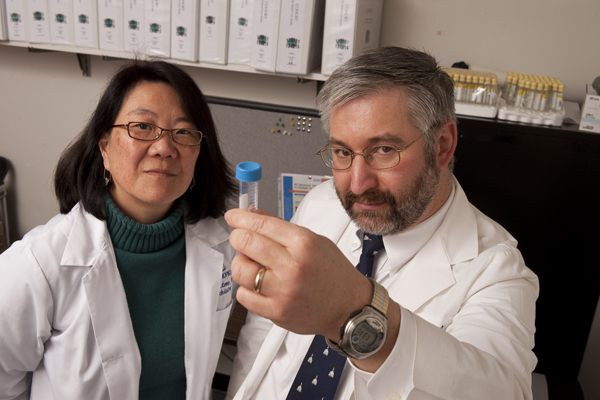 Russell Margolis with Nadine Yoritomo, a research nurse who performs most of the biopsies and clinical interviews for his schizophrenia studies. Photo: Will Kirk/Homewoodphoto.jhu.edu

About 1 percent of the population is affected by schizophrenia, a severe form of mental illness that has proven difficult to study and treat, according to Russell Margolis, director of the Johns Hopkins Schizophrenia Program.

But a recent breakthrough in the ability to transform skin cells into stem cells and then into nerve cells has Margolis and his research partner, Hongjun Song, poised to make progress in exploring schizophrenia at the cellular level, with the help of a two-year $275,000 grant from the National Institutes of Health, underwritten by the federal stimulus package.

“The field has been stymied in developing new approaches to treatment,” Margolis said. “Fundamentally, treatments haven’t changed much in 50 years or so. New medicines have come along, but both old and new drugs often have nasty side effects. Both work by similar means and were discovered largely by accident. So the field is in great need of new approaches to finding therapeutic targets that might be treatable by medicines.”

Margolis, a professor of psychiatry and neurology at the Johns Hopkins School of Medicine, and Song, an associate professor of neurology at both the Institute of Cellular Engineering and the School of Medicine, plan to use a remarkable new technology in which cells extracted from a pencil eraser–sized skin sample from a patient or a control subject can be converted into induced pluripotent stem cells by using a few biochemical growth factors. The iPS cells can then be differentiated into neurons, Margolis said.

“These cells hold great promise in helping to sort out the pathogenic processes at work in schizophrenia and have the potential to lead to new therapeutic advances,” Margolis said. “One of the goals of our field is to find new ways to approach therapy, and that’s where this work comes into the big picture. It would be wonderful to study cells from people with schizophrenia to see if those cells are different than the cells of people without schizophrenia, and find ways to intervene and normalize the pathways that are affected.”

Living nerve cells from people with the disease have not been readily available for study, and animal models remain problematic—two significant limitations for researchers. Without new research options, patients are left with existing treatments that don’t help everyone and often have severe side effects, Margolis said.

“One of the central problems is that it has been difficult to develop good cell or animal models,” Margolis said. “Animals don’t have schizophrenia. We can’t ask if they have hallucinations or delusions, and other symptoms, like loss of motivation and cognitive problems, are difficult to interpret in animals.”

Margolis and Song are studying a small, carefully selected group of people who have been extensively examined clinically and cognitively and who have undergone neuroimaging assessments.

The skin biopsy itself is a relatively simple process that is slightly more invasive than drawing blood. Song’s lab has the expertise in the necessary cell conversion, Margolis said. Through Margolis’ ARRA grant, he and Song will be able to hire one or two assistants, and he will continue to work with his longtime Johns Hopkins associates Nadine Yoritomo, a research nurse who performs most of the biopsies and clinical interviews, and psychiatrist Sarah Reading, who uses MRI technology to study brain structure and function of individuals with schizophrenia. Christopher Ross, a psychiatrist and director of the Division of Neurobiology within the Department of Psychiatry, will also assist with the cell analysis, Margolis said.

The stimulus grant made it possible for Margolis and Song to pursue this new line of research. “Without the funds, we do nothing or we do extremely limited, slow work,” Margolis said. “This approach to schizophrenia is done by only a handful of laboratories. It’s expensive and technically challenging to grow, develop and analyze iPS cells. We consider our investigation a pilot project, and we expect that the process will become more streamlined over time. So we are starting small, and once we prove that it works, we can seek other funding to expand the project.”

Margolis and Song are also working together on a separate NIH grant with related goals, where Song is the lead researcher and Margolis is co-investigator.

Margolis’ schizophrenia project is among the more than 300 stimulus-funded research grants totaling $157.4 million that Johns Hopkins has garnered since Congress passed the American Recovery and Revitalization Act of 2009 (informally known by the acronym ARRA), bestowing on the National Institutes of Health and the National Science Foundation $12.4 billion in extra money to underwrite research grants by September 2010. The stimulus package—which provided $550 billion in new spending, including the above grants, and $275 billion in tax relief—is part of President Barack Obama’s plan to revitalize a stagnant economy by doling out dollars for transportation projects, infrastructure building, the development of new energy sources and job creation, and financing research that will benefit humankind. As of November, Johns Hopkins scientists have submitted nearly 1,300 proposals for stimulus-funded investigations.