A town hall on No Child Left Behind 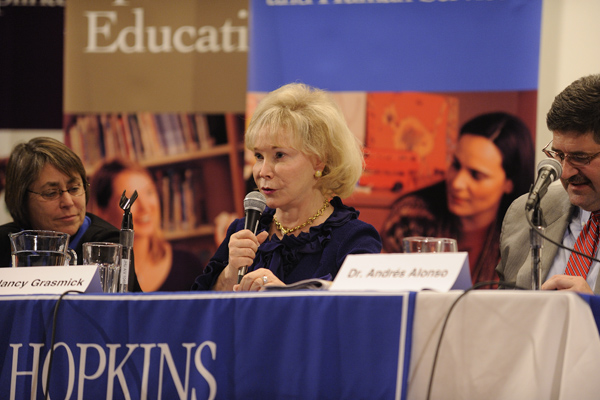 Panelists Martha Kanter, Nancy Grasmick and Andres Alonso discuss the next reauthorization of the Elementary and Secondary Education Act, set for 2010. Photo: Will Kirk/homewoodphoto.jhu.edu

The No Child Left Behind Act of 2001, one of the seminal measures of the Bush administration, ballyhooed a lofty goal of having 100 percent of U.S. students achieving at grade level by the year 2014.

In recent years, the legislation has become something of a punching bag, with no shortage of critics who take shots at the bill that advances standards-based education reform and emphasizes improvement in reading and writing.

While proponents of the bill, which reauthorized the Elementary and Secondary Education Act of 1965, say that there has been measurable improvement in student achievement in reading and math and an increased accountability of schools, detractors argue that NCLB has caused states to lower achievement goals and motivates teachers to “teach to the test,” putting far less attention to subjects—like art, music and social studies—not represented in the standardized exam.

Such sentiments were expressed Monday evening at a town hall discussion on the next reauthorization of the Elementary and Secondary Education Act, set for 2010. The event, sponsored by the Johns Hopkins School of Education and held in Shriver Hall on the Homewood campus, drew a distinguished panel of education leaders and researchers to discuss the future of No Child Left Behind.

The program, the culminating event in the school’s 100th anniversary celebration, was the first in a discussion series titled Shaping the Future that will address the most challenging issues in education. The school is committed to hosting at least two major discussions a year, held in the fall and spring. Future talks could focus on issues and topics such as “the achievement gap,” special education and elementary school administration.

Dean Ralph Fessler said that the school wanted to kick off its second century by fostering a dialogue on national education issues.

“And to begin this series, we could think of no better topic,” he told the more than 300 people in attendance. “There is a great deal of discussion occurring in Washington and across the nation on the reauthorization of ESEA and No Child Left Behind. We thought this topic would help us focus on what we have been emphasizing throughout our history, which are the challenges that face public education.”

The panel members were Martha Kanter, U.S. undersecretary of education; Nancy Grasmick, Maryland state superintendent of schools; Andres Alonso, CEO of Baltimore City Public Schools; Robert Slavin, director of the Center for Research and Reform in Education at Johns Hopkins; James McPartland, director of the Center for Social Organization of Schools at Johns Hopkins; and Mariale Hardiman, former Baltimore City public school principal and chair of the Department of Interdisciplinary Studies at the School of Education.

The school invited all area principals and their teachers, community leaders and parents, as well as its students and alumni, to attend the event.

No Child Left Behind is largely based on the belief that setting high standards and establishing measurable goals can improve individual outcomes in education. The act requires states to develop assessment tests in basic skills to be given to all students in certain grades if those states are to receive federal funding for schools. The act does not set a national achievement standard but rather leaves standards to each state.

Kanter, who began the discussion, said that the U.S. Department of Education has set out to discover what about NCLB has worked and what hasn’t. To this end, Secretary Arne Duncan launched a nationwide Listening and Learning tour in May to solicit feedback on No Child Left Behind and to help shape the Obama administration’s education agenda.

“We are asking ourselves, What can we learn from research and NCLB to make changes that will allow us to do a far better job of closing the achievement gap and continue school improvements?” Kanter said. “What we do know is that there is a lot of room for improvement.”

Kanter said that the administration will seek, among other things, to elevate the status of teachers, decrease high school dropout rates (currently 1.2 million students per year), promote early learning (birth to age 3) initiatives and drive reform to push for higher school standards.

“When students get to college, they are too often surprised that they are not prepared,” she said. “They have been passed along in the system.”

Each panel member had seven minutes to state his or her case, although few, if any, stuck to that limit.

Some common threads in the discussion were that accountability is important but that labeling schools as failures without sufficient support is counterproductive, and that the reauthorization needs to focus on education research, specifically in relation to recent neuroscience advances, teaching excellence, early childhood education, common core high standards, expansion of subject areas to be evaluated and the development of strong school leaders.

“In the current No Child Left Behind, there is very little reference to the role of principals and the importance of that role to school success and academic success,” Grasmick said. “I have visited hundreds and hundreds of schools, and I have never visited an outstanding school that didn’t have an outstanding principal.”

Alonso said that while the goals of NCLB were bold, the means to get there were modest. Too little attention, he said, was placed on pedagogy and methodology. The act did, however, serve to focus needed attention on achievement that has led to some favorable results. He pointed out that Baltimore City has witnessed a huge increase the past four years in the number of students with disabilities who were able to pass the Maryland High School Assessments.

“Four years ago, it either didn’t matter that these kids were not exposed to a standards-based curriculum, or the kids were not able to pass,” he said.

Looking forward, Alonso said he hopes that there is “fundamental change” in education nationwide.

“We are left with the challenge of turning around schools and neighborhoods,” he said. “All the levers we can have to bring about that turnaround, I welcome. I am very interested in what happens next year with the reauthorization.”

Many of the panelists criticized the standardized tests and said that government agencies need to improve how testing is used. They said that curricula have been dangerously trimmed because schools are teaching to narrow tests.

McPartland argued that the current tests create “bubble students,” those who fall just below the standard and are given an inordinate amount of attention to the detriment of others.

“Those doing well get little attention, and others are allowed to fail because they would hurt the average,” he said.

Slavin said that too many compromises were made in implementing No Child Left Behind and that the standardized tests create a climate of “terror” among school administrators.

“Accountability is fine, but when you have only one tool, reading and math tests, and you are trying to reform 100,000 schools using this one tool, then you are going to run into a lot of problems,” Slavin said. “You heard about many of these problems tonight, such as narrowing the curriculum and shutting out arts, music, science and social studies and, like Jim [McPartland] said, the creation of bubble students and a ‘gaming’ of the system. Nobody intended this to happen, but now we have the experience to know that is what we are getting.”

Slavin said that any reauthorization needs to promote and reward innovation in education.

Christina Godack, assistant dean for external affairs at the School of Education, said that the new series, which includes question-and-answer sessions with the experts after each presentation, is part of the school’s community outreach effort.

Godack said the next Shaping the Future topic will likely be announced in January.