Annual tradition rings in holiday season on the Homewood campus 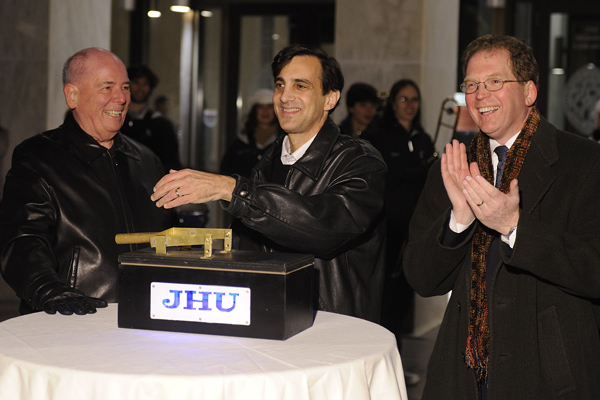 Winston Tabb and Lloyd Minor join President Ron Daniels, center, as he throws the switch that signals the annual Lighting of the Quads on the Homewood campus. Photo: Will Kirk/homewoodphoto.jhu.edu

Hundreds of students and several senior administrators crowded near the steps of the Homewood campus’s Eisenhower Library on Monday evening to flip the switch on the holiday season with the annual Lighting of the Quads ceremony.

On the chilly December night, the 500-plus revelers huddled for warmth on the Keyser Quadrangle and sipped hot cider or hot chocolate as they waited for the ceremonial switch authorizing Facilities Management to illuminate light-wrapped lampposts around the campus.

The fifth-annual event featured musical performances of holiday songs by the JHU Pep Band and three a cappella groups—the AllNighters, Octopodes and Sirens. It also marked one of the first public appearances by President Ron Daniels since his surgery in October.

Daniels, who earlier mingled with the crowd, stepped up to the switch a little after 9 p.m. to greet everyone and ramp up the noise level. After a boisterous “hello,” he asked the Pep Band to play the university fight song to stir up the crowd even further. “Now if that doesn’t get you in the holiday spirit, I don’t know what will,” Daniels joked. “You are very hard-hearted if you are not moved by that.”

Daniels then asked Provost Lloyd Minor and Winston Tabb, Sheridan Dean of University Libraries and Museums, to join him at the podium and start the countdown. On cue, the lights turned on and the festivities continued into the night with more songs, hot drinks, doughnuts and cookies.

The event, held this year on the last day of classes, had been rescheduled from Dec. 2 due to weather. It is sponsored by the Student Government Association and the offices of the deans of Arts and Sciences and Engineering.